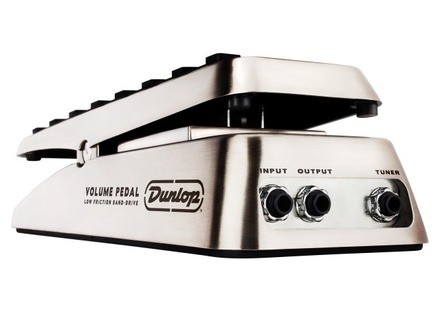 All user reviews for the Dunlop DVP1 Volume Pedal

Average Score:4.5( 4.5/5 based on 4 reviews )
Value For Money : Excellent
Not satisfied with those reviews?
Our members also liked:

Dunlop DVP1 Volume Pedal
4
One of the main problems that I have with most volume pedals is the lack of control. I know I'm probably being a huge stickler for quality. I only really bought volume pedals because I thought that they would allow me to lower my volumes during live shows when necessary, but also not rob me of brightness or tone. A second, more active use I have for them is for volume swells. I was used to performing this technique on my guitar's volume knob, but the impracticality of that was severely limiting. I have often been frustrated with some of the volume pedals that I have purchased over the years, but have recently found a few good ones.

This pedal is definitely one of those. It's a little more pricey than what I would really want to pay for it, but it's a good value and Ernie Ball will fix it anytime for a reasonable price (so they say). The pedal is only suitable for guitars and basses with passive pickups because of the resistance that it can handle, but I don't own any instruments with active pickups anyway, so it's not a problem for me at all. Another neat feature is the fact that it provides a switch that switches between two rates at which the volume will swell. For the most part I stick with one setting for my main sound, leaving it at about 80-85% of total volume, and cranking to 100% when it's time for a solo. I find the other setting to be better when I actually want to throw some volume swells in there. I find this technique with a good delay can make some really cool sounds!

Another neat feature is a tuner bypass switch, which will allow the guitar to tune while the pedal is completely depressed for silent tuning. However, since I already have a tuner that bypasses for silent tuning, I don't really need this at all, though I'm sure many others will appreciate it. I feel like this is one of the better volume pedals I've tried. I have mixed feeling about the Ernie Ball brand in general, but lately I've really been coming around to them.

This pedal has certainly helped in that situation. It's versatile enough for anyone trying to stick with one channel.

Dunlop DVP1 Volume Pedal
4
For a long time, people have been wanting a volume pedal that feels like a wah pedal. For the longest time, nobody offered it. However, Dunlop has it, and it works just like you'd expect. It's your basic volume pedal with the input/output and a special input for your tuner. This is great for when you want to keep the tuner out of the overall signal path, but considering today's tuners are mostly true bypass, it's kinda unnecessary.

The pedal itself is build like a tank. I could throw this thing off of my house onto the street, and it would survive without any issues at all. That's one of the great things about these Dunlop pedals. They're built for road abuse in mind, and they can take some of the most aggressive punishment out there. The manual isn't needed for this device. Simply hook it up, and you're good to go. The pedal inputs/outputs are laid out in a way that it should be able to adapt in the spot where your old volume pedal was.

The sound is pretty much just like any other volume pedal out there. I mean, it's a volume pedal. The way this works is that they have a guitar pot inside here. While you move the treadle, the pot inside this moves. It's a very simple way of operating. There are two different ways to use this. One is to run it in front. This'll make it act just like your volume knob on your guitar. That means that you don't exactly have a linear style of control over it. I prefer running this in the loop as it sounds a lot more natural, and you can totally kill the amp/hiss/noise with it that way.

Linn Sondek's review (This content has been automatically translated from French)

Dunlop DVP1 Volume Pedal
5
Pedal that provides a platform for outstanding support. Construction, as always with Dunlop and MXR, is a ruggedness. The pedal travel is also in perfection: very progressive, it feels perfectly the movement which allows high precision. An entry is dedicated to a tuner.

The use, very simple, can be impaired.
Sitting or standing, the angle is ideal. And have tried a few other models as a volume pedal, I can assure that this is ultimately not as evident in the concurrency.

No battery, true bypass: the sound is identical with or without.

The best volume pedal I've owned, tested. Alongside this Dunlop, the really pale in Morley.

I will especially compared with the Musicman what I especially liked is the quality of Dunlop was entitled to an arm instead of the string of the string Musicman, string after string of information that costs the skin of the ass to be replaced if it cracks LOL then changed a string on a pedal I say no ...
For against the Musicman at longer travel, do not forget to thank grandma for wanting sacrificed his small boat ...
The Dunlop is not very transparent it distorts the sound, it does what is asked of him no more or less, it does not move a muscle, it is not life grand?

nine to 90 € super quality / price ratio, the Musicman is around € 120-130 secondhand
FYI, pedal used by Steve Lukther on tour in France in 2011, saw the concert in his pedalboard Ozoir-la-Ferriere ...