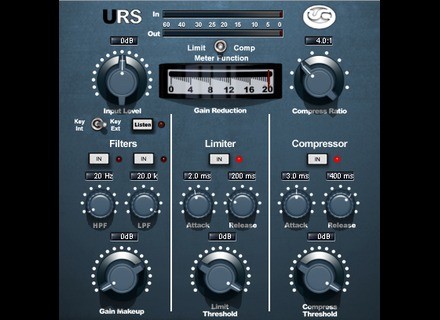 URS 1970 Classic Console Compressor
5
The URS 1970 Classic Console Compressor is compressor/limiter plug-in for virtually all software platforms. It's available for both PC and Mac in TDM/RTAS (Pro Tools), VST, and AU (for Mac) plug-in formats. It's probably my favorite plug-in from URS and is in general one of my favorite compression plug-ins. I've owned the plug-in for a few years, but from what I recall it wasn't too difficult to install or get it on my iLok or anything like that. The design of the plug-in is basically modeling itself after a Neve 2254 console compressor that was built into a number of the old Neve's. Of course they aren't licensed to say that this is modeled after it, but it most surely is. Included with this plug-in is both a compressor/limiter/sidechain version and a compressor only version. The compressor only has parameters for input level, compression ratio, threshold, gain make up, attack, and release. The full version has all of those parameters plus high and low pass filters and a limiter section with separate parameters for limiting threshold, attack, and release. A manual shouldn't really be necessary unless you're not too familiar with using compressor/limiters in general.

I'm running the URS 1970 Classic Console Compressor plug-in on my home system where I'm running Pro Tools LE 8. I've got a Mac Book Pro lap top that has a 2.2 Ghz Intel Core 2 Duo processor and 4 GB of RAM. I'm running Pro Tools LE with a Digi 002R audio interface. In most of my sessions I've got at least a few of these running at a time, and it's safe for me to say that I can pretty much use this as a please on my given system...

I'm a huge fan of the URS 1970 Classic Console Compressor, as it's definitely one of my go to compression plug-ins. I always try to use analog compressors when I can, but if I'm working in the box at home I find this plug-in to be perfect for applications of all sorts. It's very warm sounding as far as plug-ins go, and I find myself using it mostly on vocals, guitars, and I also love using it on a drum bus channels. It's definitely useful across the board however, as I won't hesitate to use it on anything. I like many of the plug-ins that URS has to offer, but the 1970 Classic Console Compressor is probably my favorite, which I think is saying a whole lot...
Did you find this review helpful?yesno
»