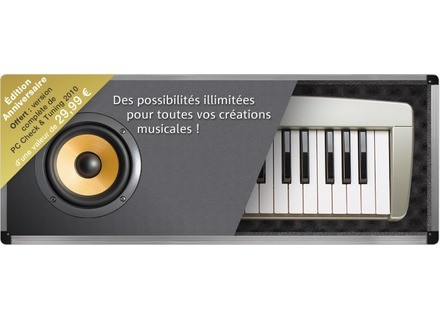 chtibreton's review (This content has been automatically translated from French)

Magix Music Maker 16 XXL Pack
1
Afiennes dear, dear ... I buy gently Afiens the Premium version, so no keyboard, for 99 Euros from the publisher ... I previously used versions 2004 and 2007, excellent "notepad" intuitive, no-brainer, effective up to 12 tracks with effects and eventually mastering (it's written on it). Until then ... nice! but then, taking this version, I cry foul! Thinking improve a very good notepad quick and easy to use, with additional features pretty windy in the pub ... Etc. I "bump" on an AMD 2200 + with 2GB of RAM, which always makes me correctly by running service without any worries Cubasis VST4, Cubase Essential 4, Project 5 V2, Ah! for sure! sacred "makeover" is almost beautiful, we always fix it easily ... and then THE CATA ... I put ideas (guitar, keyboard) on the app, and for the second consecutive time, two times 5 and 7 hours of work in the damn air through a fine screen will freeze at the opening of the rack of effects, (8 and 6 tracks posted, I figured not even asked whether I had the room ...) and nothing has fai: refusal to do anything else, and system reboot, death in the soul, not to brag, a damn good job ... in the air X2!. In conclusion, the Sieur MM16 part of its intensive use and its royal Bugs and big crashes, although it is nicer than the previous version, not worth a rabbit fart: he happily finished his mistakes at the bottom of the basket, and the CD Rom has him finish Frisbee ... That's all it deserves C.. same. My opinion? After careful reflection: Fly, Stakanovistes the draft, this plant sabotage what this app! That there is smoke and mirrors ... I am not even Cubasis of dirty tricks like that! Qd I keep my same 2007 version, which I never worry too much because more than 12 tracks, even if less "sexy" ... A word ...
Did you find this review helpful?yesno
»