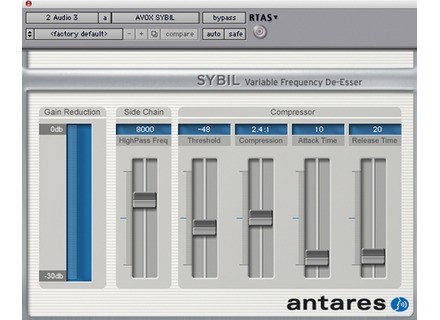 All user reviews for the Antares Audio Technology AVOX Sybil

Antares Audio Technology AVOX Sybil
4
The Antares Systems AVOX Sybil is a de-esser plug-in that comes in the AVOX vocal toolkit bundle of plug-ins. While it's a de-esser, it's got a more standard compressor make up in it as well, so it's really an all around dynamic processor for vocals. Installing and getting the plug-in up and running was quick and painless as it only took a few minutes at most and was a process where I didn't encounter any issues at all. Learning how to use the plug-in is almost as easy, as it's got a really simple make up and fairly standard parameters for a dynamic processor. These parameters include sliders for threshold, compression (ratio), attack time, and release. It also has a side chain where you can set the high pass frequency desired. That's pretty much all there is to the plug-in, so it's not your typical de-esser make up as it's more like a standard compressor even though the purpose of it is for de-essing. I haven't seen a manual for the AVOX tool kit or this plug-in specifically.

I'm currently running the Antares Systems AVOX Sybil plug-in in Pro Tools LE 8 that I run on a Mac Book Pro lap top computer. The computer consists of 4 GB of RAM and a 2.2 Ghz Intel Core 2 Duo processor. I'm running Pro Tools LE with a Digi 002R audio interface and I monitor everything with a set of ADAM A7's. I can't say that I've ever had a problem running this plug-in within this system, but I also have never had a need to test the waters in terms of what my system might be able to handle relative to this plug-in. Having said this, I will probably never need to do so as I've never needed to run more than one or two instances of this plug-in at a time.

Overall, the Antares Systems AVOX Sybil is a nice little plug-in that can be useful on a few different levels. I can't say that it would be my go to plug-in for de-essing or any sort of dynamic processing, but it's got it's own thing happening and can certainly be useful. The sound is pretty good but isn't anything super clean or noteworthy. It will however, certainly get the job done for light de-essing. Having said this, I'd also recommend checking out the Eiosis E2 Deesser and the Massey one as well, as those are the best that I've used. Also, to get this plug-in you'll have to purchase the entire AVOX tool kit, so if you're interested I'd encourage you to check out the other plug-ins as well to see if it's a bundle that might be useful to you.
View price information
Did you find this review helpful?yesno
Cookies help us improve performance, enhance user experience and deliver our services. By using our services, you agree to our use of cookies. Find out more.