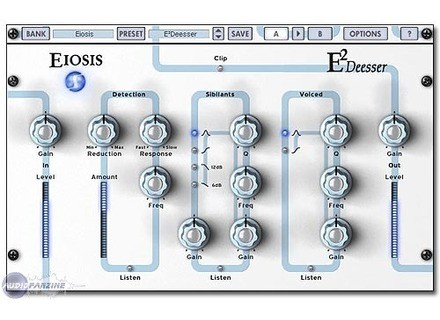 Eiosis E² Deesser
5
The Eiosis E2 Deesser is the most in depth processor of it's kind that I've seen, software or otherwise. The plug-in is available in all plug-in formats and for both Mac and PC operating systems. I wasn't involved at all with installing this plug-in, as I don't own it and only have experience using it at the professional studio where I'm currently working. I can however, comment on the interface and overall ease of use of the plug-in. While I wouldn't say that this plug-in is the easiest to use, the trade off is that it's the most versatile of it's kind that I've used and really isn't too hard to use in the end. Eiosis uses some unique parameter configurations and algorithms for their plug-ins, as you've got control here over things that you normally wouldn't. With the E2 Deesser, you can find and hear the unwanted sibilance and remove it. The make up is certainly unique and will take a little while with it to get used to, but once you've got the hang of it it's fairly easy to operate. I've never had a need to check out the manual, but it might be helpful if you're feeling lost with the make up of this one.

We're running the Eiosis E2 Deesser on a few systems at the studio that I'm working at, as we've got a number of different rooms to choose from here. We do have it on the main room's system, but I've used it in one of the smaller mixing suites, which is still Pro Tools HD based, so I can't say I've ever had a problem with performance here. It isn't the type of plug-in that you're going to be using on every track anyway, so as long as you have a system where you're currently able to run plug-ins without a problem, this one shouldn't put you over the edge...

If you want a serious, serious de-essing plug-in for your DAW, look no further than the Eiosis E2 Deesser. It's probably the best overall de-esser that I've used, and this includes hardware as well. It gives you way more control than you would even dare to ask for, and provides a unique system for toning down that unwanted sibilance. While not the cheapest plug-in in the world, if you're a professional who deals with vocals a good amount, it may be worth it to have. I'd definitely recommend checking out the demo version of this plug-in if you're at all thinking about getting a de-esser in any form.

1 Published on 02/18/08
Eiosis has announced that E²Deesser is now available in all native formats for both Windows and Mac OSX.