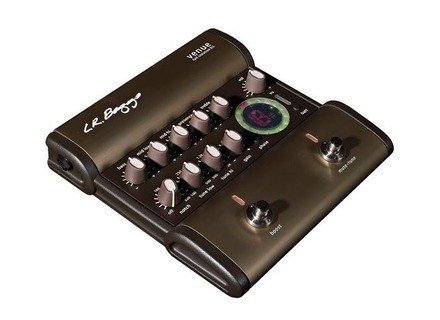 miconmac's review (This content has been automatically translated from French)" Welcome to the pros!"

the +:
Built like a tank. Switches, knobs and connectors are apparently of good quality (no pb for 1 year 1 / 2 which is not common on machines made in China).
Very good grip.
Carrying case worthy of the name.

the -:
Lack the power via phantom power: it is either a 9 V battery or external power.

It's a real professional tool that allows to almost instantly get an amplified sound that is musical. We hear clearly what happens when we act on knobs and is assimilated very quickly the potential of the machine.
Compared to EQ a mixer pro, here are the parameters optimized for the range of a guitar: it comes so quickly and precisely to get what we want. The example is able to act separately on the high mids, treble and presence is extremely effective.

the +:
The tuner is as accurate and as fast as the Boss (and more readable)
Anti-feedback which is actually quite effective and transparent enough
The switch boost
The complementary output to an amp
Effects loop

the -:
The boost switch is fine ... but have access to 2 or 3 feet to pre-EQ settings would be perfect

Difficult to argue that ID is more transparent than the passive DI boxes commonly found on the scene: as you can not isolate the function of Part DI preamp and EQ section, it is impossible to compare 2. That said, I think we can actually talk about transparency in the sense that I did not see or breath of adding color noticeable. And I found out the sound of my M1 active with all its qualities and its slightly smaller defects "electrify" the sound of my folk.
Compared to a passive DI, we see that once we on the other hand up the entry level preamp, the sound becomes both more "beefy" and more "airy". That said, it is possible that the preamp is a very good mixer achieves the same result. But theoretically, it is preferable that the sound that travels through the cable is already sufficiently strong to be disturbed as little as possible. Therefore benefit "technical" Coming in on that aspect.
In terms of smoothness equalization and compared to what I get on my good mixer (old Soundcraft 200B series), the Venue I can definitely go much further with a control both more accurate and more simple.
In the end, I actually found the sound I get is much better than all other systems I tried: Farewell tube preamp, DI, compression and other exoceurs sound!

I use the Venue for some months and it's definitely a huge step forward compared to what I used in concert. Even in the studio, the pair M1 + Venue can be a useful complement to the microphone jack.

+ What I like:
1. The possibility of equalizing himself to the sound of his guitar with a fully optimized tool for that. Then it will be necessary to the sound engineer to integrate the result in the overall mix.
2. The professional nature of the machine is sturdy, reliable, efficient and simple to implement

What I like -:
I certainly know that re-break my piggy bank when LR Baggs released a Venue enabling switch between different presets EQ