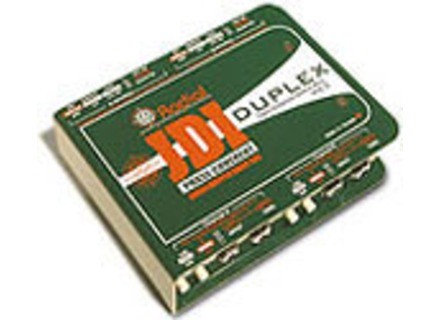 riles's review (This content has been automatically translated from French)

Radial Engineering JDI Duplex
5
This is the two-channel version of the JDI MK4.

It is a passive DI using transformers Jensen (The manufacturer of audio transformers most famous in the U.S.). Therefore no power is required.

Input jack, RCA (very useful with the proliferation of laptops) and XLR.

Like all DIs, it connects between the source (asymmetric and / or high impedance) and the microphone input (balanced, low impedance) of a mixer. The DI should be placed near the source. It minimizes the noise and signal deterioration in the link.

On each channel there are two RCA jacks and 2. The two are mixed in mono RCA to the XLR output. The merge function allows to mix the same way the two mono jacks.
This is useful when a keyboard that absolutely wants to resume its synth in stereo but that is only one entry on the console ... (Okay, that's cheating but the musician does not know when he's happy ... and the public either does not know how it could have been ringing)

Otherwise, the features are those found on any self-respecting DI.

Although no LED indication the status of various switches, we come to identify their position clear to the eye or touch (in black).

The DI is recommended for high-level sources (transformers saturate the "kindly" as an analog tape or lamps, while the active DIs tend to clip hard)

Contrary to the belief of passive DI soft and muffled, it is very accurate (good impulse response) and clear (extended bandwidth in the treble).

Lovers round, you are wrong (hence the 9 / 10).
Lovers of transparency, the DI is for you.

I compared it on stage in a BSS AR133 home. The source was a sound card for laptop. The JDI was sharper and more defined.

Construction foolproof (steel case with 2 mm thick, the machine weighs over a kilo).

Jack versatility with its inputs, RCA and XLR, and merge mode.

A tool resolutely professional, the same standard as the standard BSS Klark Teknik DN100 or AR133.

In fact the whole range Radial deserves to be better known in France.