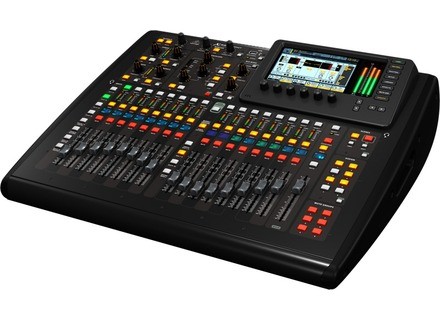 X32 Compact, Digital Mixer from Behringer in the X32 series.

araubas's review (This content has been automatically translated from French)

Behringer X32 Compact
5
For specifications, a small passage on the site behringer and voila.
Note:
The compact X32 has exactly
* The same processing power than the X32 standard,
* Exactly the same options and more.

The config is super simple .. if you have ever used a digital console, a few minutes are sufficient to find its bearings.
Routing is simplistique (okay, I have a Tascam DM so everything is easy after ca).

I have not opened the manual ... but I was told it is not terrible, but it does not matter, we need not (ca I confirm).
There is a "quick start guide" that explains the basic functions.

Using the iPad is just as well as on cl5 yamaha.

The preamps are doing their job as they are not over-feeding.

So, to cut short, that it's midas preamps, it's a bit like saying that the guy who bought a pro5 has behringer preamp above.
So there has some difference. But for the small concert, small room, small cafe and within the limits of reasonable and well ca actually quite. plus it is extremely user friendly.

Bonus gift of the compact version of: Ca not take place and it is definitely more reasonable.

Its only flaw is the inscription "Behringer" in large above the screen. Otherwise, I always look for what might be lacking in this table.
Stability over time? SAV Behringer seems to take things in hand after everything I've read in all the forums before going to the buying phase.

Besides its direct competitors (SI expression 2 or AS-16) it is probably "worse" and cheap ... I would still be curious to invite "specialists" in a blind test.

From an economic point of view, there's not even discussed possible, then it is unavoidable.

28 of 28 people found this review helpful