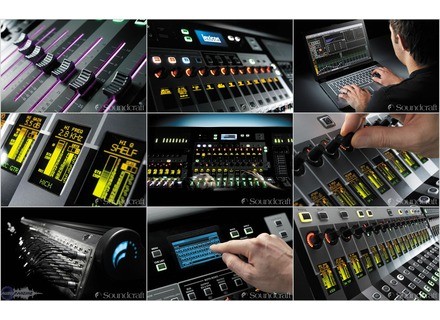 julcapmar's review (This content has been automatically translated from French)"The full mess!"

HiQnet behind, but that is useless!
Midi behind, which serves as program change, so just for memories (not tested but there must be a bug)

Console very easy to use, with some habits to take to the use and especially to counter the many bugs (see below)

In general everything is a little too rigid, we would have liked to have a bit more of a gas plant

Nothing to say about the preamps, it sounds but it is not the same as vi as we have sold ...

The effects are good, would it still be able to save user presets at any time to find the beautiful reverb that took an hour to stall ...

We do not see the action filters (high cut low cut) on the screen in the EQ menu, but it&#39;s a detail.

Sound engineer in a theater, I use this console for 5 years.
We had a choice between it and a Yamaha M7CL (vi were not yet out), and we turned to the "future"

At the beginning we were promised changes of soft (there was even no internal patch!) And voila or we sum today:

- Now total abandonment by the manufacturer, while there still developments on the soft SI compact costs about 10 times less expensive, look for the error!

List of things that sorely lacking in this console and that should be there to:

- No copy of EQ 31 bands on the bus while it works for parametric (inimaginable!!)

- No user libraries for effects presets or other

- No possibility to move the slices (eg effects returns on page D after all blocked, no way to send a master next to a slice, etc ...)

- No console lock, which could be handy with kids around

- No audio player usb, AC should not be rocket science to do!

- Some buttons that are useless, put the case and in fact not ...

- No confirmation for the recall button, if not Store and we pressed without gaffe was more than to start all over again!

quite the bug occurs during a reboot of the console, this is what I do every time I turn on the console:

- The time slices are sent buses to nominal 0dB then officially nothing is sent in (just imagine the consequences ...) The solution or mutate all of the departures and open as and then measure or move a little all these items (I opted for the first)

- The reverb has no time is specified, you can rerouver with reverb 3 seconds while 0.5 is posted! it is necessary to turn a bit all encoders to be sure to have what is shown on the screen ...

- On reboot, the stereo bus are no longer, they send only the left, and then do not keep the panoramic Linked slices in stereo (I take this opportunity to evoke a general latency faders to depress). it is necessary to board the bus stereo to mono, then the board stereo.

- Changes in latency cue in a show, you can be sure to have a big crack if everything is not mutated.

- The isolate to add a micro presentation after all our memories, that&#39;s fine. It is further necessary that isolates the AC gain too! pfff

- Matrices, it is convenient to send the L and R speakers in other multicast, but when the graphic EQ LR also happening in the matrices and we have no choice, it gets null and void interest.

- The other day I wanted to record a live multitrack, so a priori very simple, slices are assigned live out and presto! Except that I actually noticed that the direct out does not work, except by a reset of the patch, and the DirectOut walk but most buses (ie the return of zicos), so we are going on and DirectOut password each slice in a bus, practice

The SI3 was a good idea at the base (remember it was called "the highly acclaimed"), but lack (or total absence) monitoring and interest from the manufacturer it became a ruin abandoned incomplete and that does not inspire confidence at all seen all dysfunctions unacceptable mentioned above.

In short this is a shame as well as being a scam, and I really weigh my words!

Obviously I never do this choice, as I already hit me for at least 5 years, and I recommend to all interested in Avoid like the plague (except to buy our


8 of 9 people found this review helpful

scoop.moreau's review (This content has been automatically translated from French)" Very good Digital"

Soundcraft Si3
4
I will not make an inventory of this machine.
I have a negative which is not really a jack outputs but not to return to a sound card or recorder.
And when a player that can play on the integrated USB port, it is the problem of all digital machines today, they are all, or almost but another player or wav format ...

I do not know the machine on the fingertips, I config one time in the studio for the preamp and 2 times in concert.
If you have already hit digital we found it quickly, and the big advantage of this console is to have 2-3 control panels, on which we display what we want. Very handy when it comes to "dubber" more effects sends are on infinite knobs activated by touch, no need to turn the knob to its shipment.

The preamps seem rather transparent, with good dynamics and corrections are "relatively musical," however, I prefer the quality of treatment rather than dynamic EQ.
This is in my opinion quite a machine that broadcast but returned a little in the heart of the matter, we quickly realized that it has the resource.

Very good machine for septic digital, relax, it's probably the machine that could make you love digital, its configuration and ergonomics.

Published on 01/17/09
Soundcraft is presenting its Si3 console at NAMM.