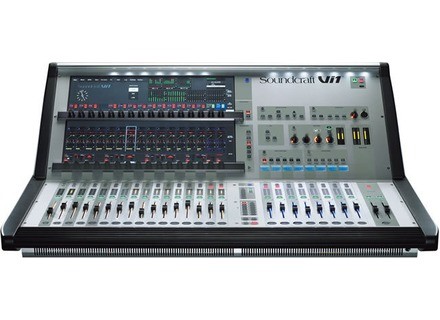 Vi1, Digital Mixer from Soundcraft in the Vi series.

Soundcraft Vi1
5
The fully autonomous Vi1 Digital has 32 inputs and 27 analog output physical (24bus + 3 Masters CSF) plus 6 digital inputs, 4 stereo effects returns and 6 digital outputs. As standard, the ability to mix extends to 46 input channels, but by adding the stage rack which is common to the entire range Vi, it increases up to 64 entries.
The channels are then routed to 24 multifunction bus, plus 2 buses and 1 bus LR mono. 8 bus can be configured in matrix, each with 16 sources. The console is very compact, has 16 motorized faders of channels with fixed configurations or custom, 8 output faders / VCA master faders and 2.
The console has an interface derived from its big sister and is immediately familiar to anyone who has ever handled a 6 Vi, Vi Vi 4 or 2 .. They are part of the same family ..

Soundcraft is the observation that it is the machine to adapt to the user and not vice versa, and that the console is in the line of his big sisters Vi 6, 4 and 2, are using is incredibly intuitive and simple, everything is logical and well thought out all the functions fall immediately to hand, no need to think a "lead" before acting .. A few malcontents may, however, blamed a lack of information concerning Eq particular, as indeed it does not exempt large graphic visuals, that being said, for me it's far from a problem we will finally be able to "make sound "with our ears and not with our eyes ..
However, a small downside, the 8 "digit" informing the allocation (Aux, Matrix Groups and VCA) of the eight faders manager among others the 24 bus outputs do not provide information attenuations (dB) of these latter as a PM5D. But according to the importer that should be reviewed quickly .. Otherwise, the surface of the console displays simultaneously and following the parameters of the 16 selected input channels (4 pages A, B, C and D) on a touch screen, the top half of the screen hosts controls the output section, the list of views and menus. The control of channel parameters is performed with 2 rows of 16 rotary encoders with undeniable comfort. We thus find the same functionality as the console of this range, including exactly the same formats snapshot, talkback and monitoring especially (youpi! !!)..
The process for dyeing faders indicating the immediate function of the latter was retained (re-Youpi!!) Is far from being a gadget is a visual comfort that it is very difficult to do without once you have "tasted" ..

I find the sound of this wonderful console did not mince words. The dynamics is respected, the stereo image is accurate and that, whatever the number of buses and functions patched internally, regular users of Yamaha M7CL, its direct competitor, I understand.
Internal parametric equalizers and graphs are accurate as desired, compressors and gates without achieving "perfection" of other products dedicated to these tasks are really good bills and widely usable.
Effects (ie original Lexicon) are very good but still slightly below the ranges PCM .. The pre amps are truly excellent and incommensurate with its competitor mentioned above, and can collect high levels without the knees on a sound recording of a poorly mastered kick drummer lumberjack ..

Regular users of Vi6 and 4 already know that with these models, the Yamaha PM5D took a terrible blow to old, both at the level of ergonomics sonic quality, with the arrival of the Vi 1, Soundcraft Assen correction to a terrible M7CL and consort, and at all levels .. Is this finally the general expected return of this prestigious brand in the closed world of professional digital sound consoles?
In all cases, each turner, each provider, each theater must try this console before making their final choice and before investment .. And logically, this should be a Vi Recapture dragged like a powder and become inevitable given the inherent qualities of this console.
If you must have one, it will be this one, if you already have one, it's a safe bet that you'll want a second, and if you already have everything you want and more too. .

31 of 33 people found this review helpful

Published on 01/18/11
The Soundcraft Vi1TM is a standalone console package with 32 channels of analogue input to 27 analogue outputs, plus 6 digital inputs, 4 Stereo FX Returns and 6 digital outputs in one chassis.

Soundcraft Vi1 manuals and other files