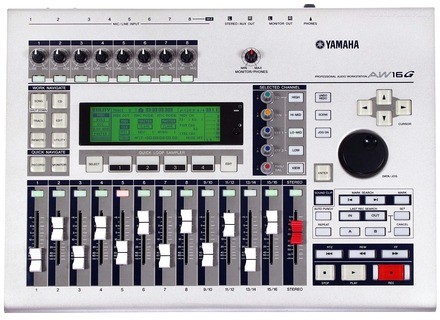 Yamaha AW16G
4
A fat digital unit
The technical features have already been mentioned by other people in the reviews.

When it works, it's nice
The effects are OK, but sometimes (rather frequently) I get lost in the complexity.

It's certainly a good machine, but, coming from a 4-track tascam cassette recorder, I am totally lost. I don't understand anything. And yamaha interfaces are very particular; you really need some time with them.
The 280-page manual isn't very instructive, in my opinion.
I know my review isn't very comprehensive, but beginners should get a simpler home studio.
I can't see anything to connect it to the computer, only a cd-rom was supplied and I can't read it. I didn't see anything about it in the manual (did I miss anything?).
Did you find this review helpful?yesno
»

Yamaha AW16G
4
16-track digital mini studio that works at 16 bits/44kHz. It records simultaneously 8 tracks and also has a stereo track to record a master. It uses an internal hard drive to store what your record. The CD player/burner allows you to import (as long as you respect the ISO formatting mentioned in the documentation), export and save an entire project, or parts of it, in wav format. No USB, no SCSI...not very practical, but you get used to it, given the quality of the unit. You have 12 mono and 2 stereo tracks for mixing, as well as 8 levels of independent virtual tracks. No track automation (although it's possible via midi and an external sequencer) but there is a Scene Memory that can be useful.
In terms of precessing, you have a parametric equalizer (4 freq) and a compressor (expander, limiter, etc...) per channel (inputs+tracks!) whose settings are very comprehensive. 2 very comprehensive multi-effects, too. A (very limited) 4-channel sample player.
For more info see the (lengthy) documentation.

The studio is rather well thought-out, although it is not the same in terms of usability as a PC software (but that applies only to the usability!). The track editing functions are laborious, but the results have an impeccable quality. Audio routing is the same as on a standard analog mixer, so it shouldn't pose a problem for people familiar with them. And for those who don't, this mini studio will be useful for the future.

In my opinion, this is the main strength of this unit, which is why I don't want to let go of it. The converters (16bits/44kHz) are of a very high quality. No converter is transparent, but how can I put it...I prefer them over several 24bit/96kHz ones. The headphone and main outputs are very good, which is ideal for mixing. The EQs, dynamic processors and effects are simple and effective (it's yamaha, remember?...).

It breathes quality. It's solid. A safe bet, despite the absence of something that seems crucial today in terms of communication with the external world (usb, firewire) but...it's a (nice) unit from another era.
Did you find this review helpful?yesno
»

Excellent, except for the absence of a USB output and motorized pots, which would be very useful when recalling scenes (which are the settings of a song that you can store).
And a small touchscreen (but I'm being picky here).
Complex manual, but if you practice and use it frequently it's quite logical. Nevertheless, the controls are sometimes tiresome.
A bit slow compared to a computer in certain cases, but it NEVER crashes (and that's priceless).
The routing of external effects to insert them into the mix is pretty lousy and takes up two inputs. Bummer.
I have two, which doubles the possibilities of my home studio (a master and a slave), and it also allows me to record outdoors at leisure.

You get out what you put in.
Parametric EQ on every input and every track so you can sculpt your sound the way you want it, and it flatters the ears. The broad possibilities allow you to correct certain "cheap" links in your chain.
The converters seem relatively neutral, I can't hear any sound coloration.
It doesn't provide any particular color and it's not a Neve or an SSL, you can be sure of that.
Careful with the input level, it clips pretty easily and the result is degraded.
If you set the compressors correctly you won't get any pumping.
Slightly brilliant in the high mids, the mastering section is effective but you will need external processors to complement it.
In short, if it grooves at the input, it grooves at the output.

After having hesitated between this one and the Korg D1600, I don't regret anything.
Even if you are limited for live recordings by the 8 inputs (despite having 16), in the studio, the individual assignation of parametric EQs and dynamic processors to every input, which can be then retouched on every track, makes everything fine.
The effects processor has only two channels, but the possibility to assign them during the rough mix allows you to insert others into other tracks, etc., up to the final mix, so you can go very far with this recorder.
P.S.: Most factory presets are pretty bad, regardless of whether it's for dynamics, effects or EQ, including (and especially) for mastering!
So make your own, save them and everything will be fine!!
You will need to add a multi-band processor at the output to get real studio-like results.
Did you find this review helpful?yesno
»

Yamaha AW16G
5
OK. There's no way I can cover everything here, but I'll give you the most important characteristics among those I actually use.

There are eight mono and four stereo tracks, and then another stereo track to which you mix down. Each track (as long as you count a stereo track - e.g. 9/10 - as one rather than two tracks) has independent dynamics processing (compressor, expander, gate) and independent four-band fully parametric eq. You can run two effects at a time.

There is also an on board sampler with four trigger pads, and the unit comes preloaded with lots of beats.

The AW16G comes with a big, easy to understand manual and an informative (though unintentionally hilarious) dvd to get you started. Once you've spent an afternoon or two recording stuff you'll be completely off book. It has it's own arrangement and everything, but once you've found everything once you'll remember where it is. The organization is comparatively intuitive.

I've recorded a full band on this and gotten great results. I currently use it mostly for recording demos of my songs to give to my band mates. We (my band) normally record with Logic on my friend's Mac, but the other day we were actually recording the drums on the AW16G and transferring them into Logic because we liked the way the A/D conversion and preamps on the AW16G sounded more. True story.

I'm mostly just recording demos to give to people who have to learn my songs, and so this is actually much better sound quality than I need for that. About four years ago I was in a band that recorded a whole CD on one of these and I was really pleased with the results. If you're really into production and are very picky about sound and control and flexibility, you're probably better off with a computer, but if you just want to get an accurate picture of what a band sounds like, or if you just want something to keep in your bedroom to cook up great sounding demos quickly and easily, this is for you.

My one complaint is that, though there are a lot of beats, they're mostly geared toward hip hop and electronic, and the rock beats are not that cool. I wish there were a lot more of them, because at least then you could pick a slightly lame beat that more perfectly fit the song. I find that I keep using the same three loops over and over, on all my songs. I've done a little bit of sampling from cds adn stuff, but really you should probably get a decent drum machine to go with this.

When I was a kid, we had to record on four track cassette, and even that seemed like a gift from god. This thing is so much better. As computer stuff gets better, and the AW16G gets older, it seems less and less state of the art, but it's still the best scratch pad I can imaging. I don't use it for &quot;serious&quot; recording projects anymore, but I still use it almost every day.
Did you find this review helpful?yesno
»
Read the 23 user reviews on the Yamaha AW16G »

Yamaha AW16G manuals and other files