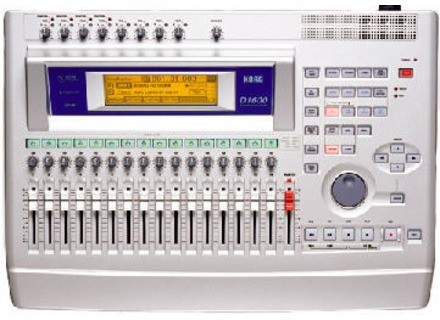 Korg D-1600
5
I am song writer and like to perform my own songs.And I wanted my music to be available anytime. You know painters can show there paintings while musicians must play them ( they can not do that everytime). So I decided to purchase a gear that can help me on this issue.Most friends advised me to do it with a PC. But you can not move it, and most of all I wanted something with not more than one click away ( people using computers are getting confused sometimes me and my Korg don't ). So I bought it in Turkey ( that's where I live ) for about 1450 $.

High Quality recording ability. Move it anywhere where you play your music.Plug in and play and start recording.

It would have been much better, if it had a program and an interface to transmit the songs to a PC.And why is there nothing sold to carry it away in an secure way.

In short words it is well done. I use it for about one year and didn't get frustrated anyway.

If somebody wants to make music on his or her own or with a band, and make it permanent, it is the right stuff. As a matter of fact you will never get the sound quality of a Studio but it will meet higher standarts than you think you will get.

Korg D-1600
5
I bought the D1600 in London for around £1200 in 2001 for recording with two guitarist friends and a few bits of MIDI equipment. I had been using a 4track Tascam tape and what more tracks and no bouncing down.

The sound quality is fine what I want (I use the 16bit mode most of the time).
The major issue, however, is the ease of use:
The touchview screen and sensible layout make it very intuitive to use - you don't stray away from the music to master the technology.
From selecting /changing the inputs for a track pair through setting EQ through setting up Insert/Master effects to recording, I find myself flying around the machine without a pause to think "now how do you do this"?

And it never crashes and starts up in about 15 secs (great when you wake in the middle of the night with a little vocal snippet in your head - pity it can't tell you when it's rubbish!)!

The effects are very useful and easy to use in their defaults. I'd like it if there was more detail on some of the parameters though.
A link to the BPM on some of the delays would be good (instead of Msec values).
A couple of the screens are not very intuitive (but they only stand out because everything else is so neat)
It's a shame that the effects out is Mono.

CD bay doesn't make the rest of the livery!

Get one and you'
ll be pleased you bought it everytime you turn it on.

Very easy to utlisation and touch screen makes it easier

The converters are good but there is a slight loss in the dynamics (96 db, which is also the dynamics of the CD ...)
if you want better sound then it must go through a tube preamp

small snag! multiband mastering effects such as "mix girlpop" or even "groovy beat" outright change its color and removes most of the dynamics to the sound! (Not good) use the studio to have a sound limiter Elage and open at the final master! Sound color guard!

The D1600 is a recorder that works very well and there is never a crash not like on a PC .... + that's the little drum machine built especially the effects that come from the famous newt!
I found a little disappointing? It is the lack of scalability of the device as added entries or screen + mouse, and also that there have no compressor on each track on the Yamaha AW4416 from home but we can still effects such as assign them to the registration + in reading and saw that you can put 8 effects (record + play) insert into master + 2 + 1 end, we found it quite well! it's better to through a tube preamp for its + hot! other guitar effects are very realistic with my strat micro serious it gives a P. .. ITS AIN for a small box in one!! price levels I think the D1600 is the top level and quality is to go ... and the icing on the cake is the touch screen that facilitates the operation!
Did you find this review helpful?yesno
»

sebiencool's review (This content has been automatically translated from French)

Trs easy to use, I've had three hours yesterday and I already made my first mix!

In the words of the great phylosophy of this century, I have appointed Jean-Pierre Coffe ...: When frozen shit, we thawed the shit! In short, the D1600 is like a freezer, it returns what you give!

A good camera rev limit professional, you can get great things from this bidulle full of button.
Did you find this review helpful?yesno
»
Read the 10 user reviews on the Korg D-1600 »