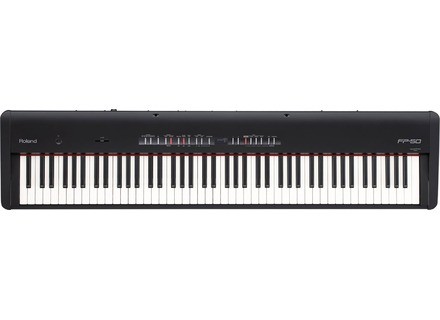 FP-50, Digital Piano from Roland in the FP series.

Anonymous 's review (This content has been automatically translated from French)"Very good digital piano, especially for its homogeneity"

Roland FP-50
5
Roland Digital Piano, successor of PF4 and FP4f.
Offers piano sounds with SUPERNATURAL technology with all of more than 300 sounds. Small built with 100 Styles Arranger, Midi and Audio player files (WAVE format 44kz with the possibility of setting the tone and speed, with a function to remove the voice!) Midi or Audio recorder for ideas. Saving sound settings in Registration. Line-in stereo mini jack, USB input, output MIDI IN / OUT, 3 footswitch inputs, but more integrated USB port (!) Amplification. It is generally very complete.
on the other hand, we regret not to find a line input jack dual format (or dual RCA) as was the FP4 and FP4f. Not dramatic, but a shame to have this input in stereo mini-jack. In addition, there is more control to adjust the volume between the sounds and the "Backing Track" (volume of the section of arrangement or Audio file is played), there are two buttons to adjust the balance, c is a little less intuitive and less accurate. Also, I really wanted to have a live setting to manage the balance between two combined sounds (to do so, you have to maintain two buttons simultaneously).
As the top surface is not metal as was the PF4 and FP4f but plastic (the pretext that it would be allowed to keep the piano equivalent weight by increasing the amplification compared to the older generation , yeah ...). Against by the structure of the front is always metal.
The weight of 16kg is very reasonable.

The affected is quite realistic and quite heavy, with a "return" bounce a tad slow, which can be a problem for some practicing. Me, I&#39;m done, I think it can work well fingering and more.
The ergonomics are well thought out but requires a little understanding because there are a lot of combinations and shortcuts to directly access to certain functions.
I must say that having had a Roland FP4, having a screen that now displays alphabetic characters on FP50 (same for FP4f) facilitates overall all the settings of the instrument. It is almost not forced out record after a moment, impossible with PF4. Very good point.
All is well managed, with less direct access as PF4 proposing more buttons, but with this screen can generally handle the piano so much easier.
The amplification makes it very good, high volume there is no saturation

The acoustic piano sounds are excellent, with a nice little very pragmatic variety (not 10000 piano sounds but a dozen can meet all needs: this is perfect it can not lose).
Electric Pianos are really not bad (but below what I found on my GEM RP-X, especially at rendering the tremolo effect makes less on FP50). The layers are not bad at all. Type B3 organs are really good I think. The Brass are very good. Strings are the property but again, the GEM RP-X makes it a little better. The rest is very varied, there is a plethora of sounds from Roland GM2 a quality quite decent. Overall we took a qualitative level compared to FP4.
100 styles are quite varied and quite modern people, good point. The effects are directly assigned to the sound played, we can only adjust the reverb level (1 to 10) or for some sounds, access to the speed of the leslie or tremolo).

This is a piano a great homogeneity.
Moreover it is the only one on the market that offers so much advantage to a weight of 16kg. I am very happy although I regret some things, but nothing dramatic overall. quality ratio is very correct, especially since its price to drop 100 euros for some time. For me, at this price, there is only the KAWAI ES7 that can compete (but with 6 more pounds on the scale which may disqualify when we must move often).

Cons:
- Some settings have deserved to be more easily accessible
- Section effect rather limited
- Online mini-jack instead of big jacks as the input FP4/FP4f
- Surface of the top plastic instead of metal that was found on the FP4/FP4f
- Loss of USB midi interface