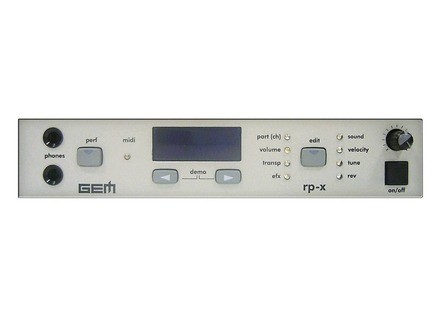 07/21/14
Not used for editing settings, so I do not pronounce me on the issue. Already the factory presets are as numerous as qualitative, and the little I found the manual seems clear and sufficient.
7/10

07/21/14
Amidst the plethora of sounds provided serial hard not to find something to dress his compositions. Already played only bluffing they are for the most part, but then immersed among other instruments, it almost touches the originals.
A much more efficient and better trained pianist that I will surely requirements in terms of rendering the game I do not "have it. At my level, and in the midst of what I compose, the expression obtained enough for me. Surely a master keyboard too plonk-plonk will not pull the quintessence of this little black box of tricks.
9/10

07/21/14
Six months ago it is in my studio. He replaced the two pianos (grand and right) and two EP my keypad Yamaha NP-30, and what I had as a VSTi.
I managed to nab one of the latest models net (I spent hours and hours to track down and identify the best price), sold new at discount price. I welcome this choice every time I play.
8/10

SAGEA's review (This content has been automatically translated from French)" A marvel!"

GEM RP-X
5
Half Rack Version, black for me!

All sounds are editable, in part via the rack and completely via the software provides!
Full Midi, two footswitch inputs, the No. 2 is only the expression for a wah and a big plus, Audio IN to reconnect a device (Very practical and some manufacturer should be thinking!)

Yes, it is very simple.
Yes the documentation is clear except on the part of the two connectors for pedals to use the expression pedal as a wah, you must send a CC # 4 so with a pedal base FC4 types it does not work by plugging a pedal against twelve o'clock Beringher style, everything is in order or passing through another midi keyboard master to generate the control!

I am under Windows8 x64 and app works fine. Just run the software compatibility and administrator. I do not use the USB driver, I go directly through a USB midi interface / Midi DIN 20 € and is nickel!
editing is very simple and real time!

Yes!
The effects are very good!
The Rhodes and Wurlitzer are pure beauty, they use the processor's internal synthesis and not samples.

Having been compared with the Korg SV1, frankly, it does not fade!
Although there me ns effects and no light, there is up to it!
Nothing prevents the passage by external effects!

Even though his heart is preferred EP, pianos are not much higher than the rest and some digital piano. No loops arises because I think Pianos are hybrids because it was the spearhead in GENERALMUSIC
I'm mainly on the 20 to 27 Rhode Wurli and Clavinet!
The expression is really excellent and the settings allow "any" tweaking!

In recent weeks, but with intensive game approx 8am day!
Yes, I had gone to a Korg SV1 to replace my SP200 and have real good sound Rhodes but considering the price I tried it and I'm not disappointed for a second!

/ Price unbeatable
The more difficult it is to find!
Yes, I would do without hesitation that choice, it is a killer!!

gnoulie's review (This content has been automatically translated from French)" Attention Nugget!"

GEM RP-X
4
It is a half-rack, no rack as is, but can adapt sth for DIYers (two threaded holes in the unit). Supplied with a soft editor. Connectors: two asymmetric line out jack, and two RCA line-in, midi in / out / thru, USB, two jack pedals. 50 sounds, including pianos samples (with friendly modeling), harpsichord, clavinet, and Rhodes Wurli (the latter two are entirely physical modeling), some additional samples (synth, strings, etc ...). Line three types of effects: reverb, modulation, comp & cie. 4 Multi timbral voice polyphony 72 voices (be careful, we tickle the limit when too many layers + heavy use of the damper pedal).

Simple to use, the manual is clear and sufficient. For soft editor (which works perfectly on XP), there is built-in help. The USB driver is provided, but it seems that it is not a success, so I immediately decided to use a usb / external midi interface, and it runs.

When you think that embedded technology (that of Promega) dates from 2002, it strikes that GEM is the true precursor of the hybrid sample / modeling on a dedicated machine hard at the piano, before Roland, and it succeeded ! The RP-X date it from 2006, and its sonic performance are still current. The first sample of piano is really nice in shiny kind, others are also interesting (honky-tonk with his recall hammers, etc.). All are very realistic. The real "plus" for me are the Rhodes, and it complements my RD700NX, which is weak (indeed, there are placed too high harmonics in the sound development of the stamp on the high values ​​of velocity, even dry).
The effects are suitable, not great quality but sufficient.
The expression is excellent (no velocity layers, timbral changes continuously, great!).

I've had two weeks. Longer, because loss of GEM (and it's a nice loss), there are still qq copies for sale on either German site. I feel stupid (and selfish!) To buy a second, so it is a pity it is endangered. The device certainly has a few weaknesses, but reported at its current price is peanuts and quickly forgotten!
The biggest flaw of the RP-X, is that the parameters of velocity response are stored in Global when they should be able to individually set for each Performance, in effect, an offset of 0 is ok for acoustic pianos, but in order to enjoy all the expressiveness of Rhodes, it must be set to 15. A touch so manually each time you move from one to the other.

LEAST:
- Sufficient polyphony, but limit multi-timbral use
- Parameters of the velocity response stored in Global

Anonymous 's review (This content has been automatically translated from French)" Super module, very expressive, the best in the genre on the market!"

GEM RP-X
5
Half-rack enclosure easy to integrate into a live set.
The build quality is just okay.
I will not dwell too much on features because they are known, except that this module includes a ROM 64 MB dedicated to the sounds of acoustic pianos, string and other pad. The sounds of Rhodes, Clavinet and Wurtlizer are pure modeling, they do not use any samples.
The case is supplied with an editor (PC only).
Line and very useful for reconnecting a second rack or synth (competition should take a leaf).
Another addition, two pedal inputs (including one for the expression pedal).
the connection is complete, USB port, and a trio noon.

The ergonomics of the rack is average, nothing more, but frankly, much better to use the external editor that allows really getting into the bowels of the beast and discover all the possibilities that are really interesting.
Without the publisher, I think this expander loses half its interest because it really helps to build your own presets in a thorough and quick. I find this editor very successful indeed, I soon mastered and only a small party I crafted sound chars.
I recommend the use of USB drivers Mumbo (which do not work under Win seven), is better to use a standard USB Midi device (if we have available of course).
on the other hand, the module does not recognize the signal south of my sustain pedal connected to my Yamaha P60, really weird. I have to connect a pedal at the rack. I do not know how to solve this problem ...

On piano sounds, I have my preference for the Grand Piano Bright (the fourth piano sound), which suits me really well in the sound.
The dynamic range is really consistent, sound is very clean, it sounds really good. I plug that uses big piano like Alicia's Keys, I have not felt a qualitative leap with less than what I found in the RP-X, there really is nothing to be ashamed! The joy of playing is really, bravo GEM!
For Rhodes, the "Real Rhodes" is my favorite, the modeling gives incredible results! The grain is there, and with a little tremolo, it does matter! Only my faithful Scarbee gave me these sensations there. I think to get better we must start in the North, and yet I think there is not such a big difference ...
The sounds of pads and strings allow the possibility of large tablecloths if you hack well with the editor. Well, it was still not a Wavestation under the hood, but more that it can really help. In combination with the acoustic piano, no worries, it does it well. For the rest of the sounds, I do not master to give an opinion on the sounds of trench CP, harpsichords and other Clavinet in general, but I like the Wurlitzer, but good.
Pity that lack of B3 organ sounds, it would really come full circle ...
The effect section is correct: the reverbs do their work, the tremolo sounds good, and stereo delay also. Too bad for the latter we do not have the ability to adjust accurately (in BPM or Milliseconds) the timming repetitions. I do not use the insert effects, but the wah (which can be controlled by an expression pedal) seemed to sound good.

It has been 5 days since I have this rack.
This is my first module dedicated to pianos and keyboards.
What I love most:
-Compact size
-Sounds of acoustic piano and Fender Rhodes fabulous
-The external editor
On-line input and two pedal inputs
-The price

At 260 euros (model returned) in Music Store, it's just fabulous. An excellent price for a module that offers sounds that sound and is very malleable through its external editor. The connection you can meet a number of configuration constraints. Only small downside, the lack of B3 organ sounds ...

Did you find this review helpful?yesno
»
Read the 11 user reviews on the GEM RP-X »

GEM RP-X manuals and other files