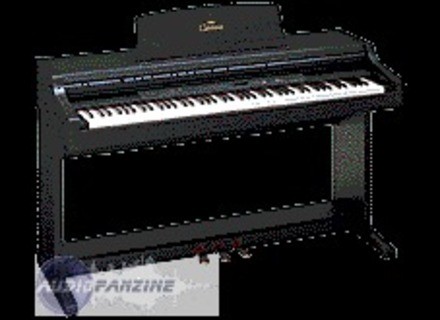 seso's review (This content has been automatically translated from French)

Yamaha Clavinova CLP-411
4
Quick note first: I am a pianist and I bought this clavinova for a little country house chauffeo the use of a real piano and impossible (temprature, humidity, mites ..... ). I can not tell you about the use MIDI keyboard, connection to amp, leads connected with the interface .... I have not tried everything a. on the other hand, in terms of playing with the keyboard simply has to be able to go

number of octave: 7 (standard piano)
its available: piano, vibes tone (if I remember well ....), two electric piano, harpsichord, two organs. there is a button "change" that can tweak the sound: the effect of the instument dpend selected. the instument can be assembled in pairs but hey .... by collecting organ or piano election between them has used too: try fouttre sound of an organ with his harpsichord and you will understand what I mean .... a button "effect" which the effect is 0 20 gives more breadth to the sound and it reminds me a kind of "chorus piano pedals." there is also a button for changing the Reverb: a range from the Gothic cathedral rsonnance no. glissire a button adjusts the volume for sonore.voil diffrent sounds that can be produced by the BTE. no infinite possibilities of course but that's normal: it's not a synth! The advantage of this keyboard is the plutt ism but I will discuss below!
it benefitted from a more mtronome (40 280), a recording mode, DMOS, functions, a transposer ...
otherwise the sound is produced by two HP situs under the keyboard (left and right). connections: MIDI (but I know nothing I can not add on this subject), computer (pc or mac), jack to go to the HP or instrument amplifier and power jack to connect with a publisher sound.

For I will be touching a little less gnreux: as has previously said t touch is softer than on real mcaniques is not super enjoyable even when :-( 's true that when we used real piano has drle dbut.on to get used to it eventually anyway.
gnrale use is very simple: you turn on and play. there are a host of more or less depending dlicate grate. they are very well explained in the manual. I m'arrte when even on a few of them: the transposition: an octave below a desuus. very practical when you play with transposing instrument or a singer: playing exactly the same thing the sound is the pitch you want! it also oeut dsacorder this keyboard! a spon crazy but well thought trs by pressing some notes below middle C + several times you can descend or climb up a half tone and the pitch, in other words it is A more ACORD 440! lorcequ'on plays very practical at the same time as a disc for example. Finally, the recording functions that can slow or accelerate the tempo of what does playing on the Record mtronome.
7 / 10: because of the comfort of play

Sounds are trsralistes and it was definitely the highlight of this keyboard. using a button that acts on the touch ("touch"), the keyboard eventually perform all necessary almost by a piano diffrent attack. even when of course it was relative: it can never achieve the same finesse attack on a real piano keyboard, but it is one of the most raliste in the Contents that I saw . I think with the sounds ism ism of touch (the product according to the Manir to push the button) is the most important thing, and here the two are brought together CHARACTERISTICS es. it is indeed rare to see a keyboard that numrique rpond both the game played it is far from o synth sound is the same as it bumps or brushes that are the key. against the pedals .... by the una corda (soft) is innaudible, innutilisable. rsonnance of the pedals is fine except that if it is a bit too long, the notes disappear prmaturment Premire cheeks: there is a hole in the sound. by a noise issue is almost flawless

I have 5 years and as I said above serves as a replaceable real piano. it has done its rle. we can have opportunities for reasonably priced and I think in its class it is pretty well located. xtrordinaire but it's not for its price is more than corect. I think I do it again the same choice o clavinova suprieur then another.
Did you find this review helpful?yesno
»

jdang's review (This content has been automatically translated from French)

Yamaha Clavinova CLP-411
4
Hello, I would first congratulates all those involved in this site, extremely comprehensive and frankly trs INTERESTED!
I possde this keyboard for several years, and I am a pianist (see mid-level beginners). I was just wondering if anyone could tell what he thought. Personally, I think it is very well, it produces a good sound. But as beginners, I believe this request DPOS To check if my musical ear is good. Professional advisory!

Thank you in advance

I find it enjoyable touch, a little more "soft" than a real piano, but for a numrique, I think it is quite correct. There are some sounds DIFFERENT, but I do not use. if we want to sound DIFFERENT (violin ,...) we take a synth.

The sound is good trs (well, I think, is the object of my request for an opinion). The only small problem is that I find that speakers are not powerful enough. At maximum volume, it can be heard some small grsillements.
As for the VLOC again, notice of beginners, I find it hard raliste is a good instrument for beginners trs piano without dbourser big bucks.

I use it for the past 8 or 9 years if I remember correctly. I have another synth (Roland EM-10) then the possibility for comparison is very limited. But what is certain is that it is much more enjoyable to play on a piano like the synth on a (much less VLOC a synth ...)
Did you find this review helpful?yesno
»