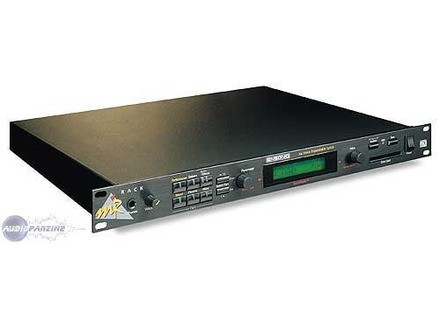 ipm's review (This content has been automatically translated from French)

Ensoniq MR Rack
5
a rack of JV2080 type released in 1996, expandable with 4 expansion slots, including the famous Urban dance EXP 03. There are other cards: piano, drum and world. has noted the existence of flash pcmcia

2 effects REVERB and CHORUS delay independent for each part + an insert effect. This is techno as that used for the same DP4 ... so that is pretty good.

300 sounds without expansion card and 500 (depends on the basis of cards)
quite light compared to the keyboard version, but what counts is the allocation of possible controller and especially his edition.

connection: internal power supply, 4 TRS outputs, twelve o&#39;clock trio no switch pedal input but your midi controller should be able to handle this

finally today the specs have changed little compared to what you could find it almost 20 years ago!

display 2 lines wide and is visible enough and the menus are very well done for. Everything is quickly accessible via two encoders on both sides of the screen.

each sound is classified, thereby arboresnce either in the conventional manner via the flow of bank or by category ... it is ultimately very practical and I think it&#39;s damn better than my JV2080 which allows the same thing, but without the bank posted the patch. Very well played by Ensoniq

The edition is limited compared to the keyboard version, but all the parameters are editable via MIDI or editor, so normal for an expander.

a reminder, this is a dead ENSONIQ brand but any brand. at the base, the company was engaged in the micro, was called by Commodore to develop the SID! (Already ca should tilt to some) and then were run in samplers with mirage. successful and cheap compared to the competition in the mid-1980s.

it is impressive, but microlight type 90 &#39;. like a JV1080 or JD990 (the latter two are archis heard different but complementary.) THE MR is a good expander with a bit of everything, with the sounds of very good quality, but also without a side already heard. ..

In fact, filters are quite impressive, the effects are very successful and 24MB card Urban Dance is a must have. By itself, the quality of model is simply stunning. including quality drumkits. Attention, it is not clone TR. Electronic kits are different, a little customization but simply DIVINE. basses, leads, NLR sheets are also perfect. A real success.

do not forget that incorporates the features of a TSR and mostly served as a basis for development of Fizmo! in other words, for those who know that it is a thermonuclear weapon!

I put great because it is well deserved and then saw the price at the moment in Cygnus and many do not even discuss it, take it before the owner changes his mind!

Some say it has "the" sound American. What is certain is that when listening to an album janet jackson, it looks like what comes out of the MR. we like it or not, but all the same it is a pretty good reference production.

one year of use and I begin to understand, but there is still work. I have some expanders, but it is another category. I would describe more rack studio, because his sound is certainly too worked for some, it brings a "button", a leg, without too much shine to the korg or sounds nice but useless. I love it.

I like his side while 1 and its specific effects Ensoniq DP4 stylish. The only problem as Ensoniq in general is reliable, but it seems to me much stronger than previous models

The prices of the Ensoniq take off. Is it deserved? I do not know. In any case, the MR is clearly ignored (because certainly the low volume of units produced), however, this is a great rack Ensoniq very successful, I am not far from thinking that this is certainly one of two best.

it will be on the front of the stage, his side did not follow those of the ASR or TSR. Who wants to move towards a Fizmo, it is certain that a good first step. But I&#39;m not sure this is temporary, it is today an MR guard carefully.

This is my favorite, and it must be pampered!

23 of 24 people found this review helpful