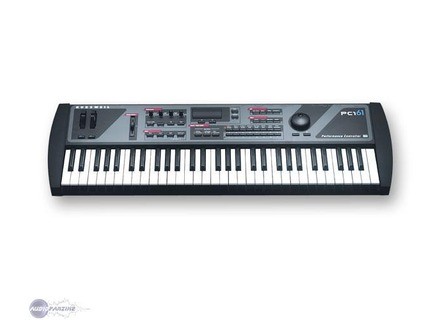 powerchordfx's review (This content has been automatically translated from French)

Note: there is a function Midi Merge and remap GM ...

This synth is simple to use. Everything is optimized for the shipping is fast. Thus, one can quickly CRER trs "setup" MIDI. For once, this version is a 61-key version Bacle range above (in order to make the discount).

It was really as powerful as Controller Kurzweil PC-1 and everything is ditable easily and logically. Being accustomed Roland, I find the logic of shipping close enough except that Kurzweil is much more convenient.

The edition of the effects? Ben, is a key "Effect", we can not get easier! on the other hand, sound effects and custom settings do not s&#39;ditent. That said, the algorithms are derived from KDFX which I believe in the legendary KSP8. So frankly, even without shipping, aa a potato!!

The Manual is in three parts: prsentation gnral product, exercises paramtrage keyboard (to understand what may happen to do with the keyboard), and finally list paramtres Retailer well (except for two or three functions) to go further in the edition. The instructions are in English. But it is so well done that I find better than Roland and Korg to quickly learn the keyboard.

Overall, one might think of a JV then come the sounds of gnrations Previous plutt. I, who wanted to take a JV, I am filled with the sounds of this keyboard. Many sounds resemble the "grain" Roland with the filters that come with hot (we like it or not ...). Moreover, on a lot of sounds, it looks like Eric Persing (Spectrasonics and therefore Roland) working on it.

The original sounds are good trs but no effects processors are so good that happens to sound certain sounds unlikely. Gnialissime a function of this keyboard is that you can save rglages sound effects without having to save it in the user memory. Each preset has its own memory effect. This concept of "Preset non bloququot; can avoid the backup memory in the user just because we did two or three touches on the effects.

The piano sounds are bof I got (I have an SRX-11 ct but shuffled with the Fantom, there are fun things to do.

The EP is really great. They are alive thanks also good trs paramtrage aftertouch and the Controller (including the wheel "mod wheel"). Frankly, this is one of the best sounds of this keyboard.

The organs are not all terrible, but the simulation of the Leslie and others are well raliss.

The brass are surprising: they have an expression trsraliste ...

Pads and other sounds are analog compltement crazy. Although quite close to Roland, there are original textures trs Kurzweil giving a real personality in this type of sound. By editing effects, there is something even more fun. Note a SERIES of patches that are identical to Juno.

The bass is really not bad for most (such as analog acoustic) ...

The Lead! There&#39;s virtually Lead Dream Theater (Jordan Rudess). This is the sound that most of this m&#39;clate BCAN. The aftertouch on a sound rgal! Lead others are as fantastic as that of Dream Theater.

The acoustic guitars are average. on the other hand, electric guitars are really great fun. No forcment ralistes, but rendering is beautiful.

Percussion and rhythm kits are ULTRA practitioner. Scabies is the quality if not better than the SRX. Frankly the kit of the orchestral SRX Exceeds the orchestra is a lot of Kurzweil on classical percussion.

For the part of the map included in the Orchestral PC-161, the sounds are at the quality of the SR-JV and SRX. In short, it sounds a pretty good overall and very few sounds pathetic (most of the solos are far SRX patches orchestra) ... But enough with the sounds complmentaire Roland. I like the harp and other string clamps. So in all, the Kurzweil gives the final touch for a "big sound". The sets are also Russian orchestra for most.

The Choirs and Scats worth the SOV samples Spectrasonics (SRJV Vocal). The effects of these sounds as warm, it has made an even more beautiful and the range of samples Kurzweil is much more tense Spectrasonics. In a mix, these sounds are perfect!

Finally, this keyboard has a great touch. I test a lot of brands and Kurzweil fate far better (for my game) than others. I play much better now that I have. It is hyper prcis and Contents of the keys is trs enjoyable. The limit switch is gniale, I would not know but dcrire approach the semi-Leste (touching the Juno-D far better).

The aftertouch !!!!!!! This is my first keyboard with aftertouch perfectly true then paramtrable forcment OUUUUUUAW I say! My fantom drive with this keyboard has given another life especially for acoustic guitars.

The arpgiateur! BAAFFFFF! Slap ... Roland can go take classes at Kurzweil. Explanation: I can not read music so measures stuff stuff, sync 1 / 16 1 / 32 and Co., "Help! I know how to swim without my mud duck!" Even if I know what these parameters are, I do not matrise. In Kurzweil, it makes sense and intuition ... In addition, we can not make arpges loop (the arpge s&#39;arrte after 4 notes, for example) ... Anyway, there are plenty of features not found or applying more widely edition Roland.

Last important point, Kurzweil offers basic sounds on which to activate effects via the "Mod Wheel" and the switches SW2 and SW4. Thus, we add other sound effects and sound base. I can tell you that on some sounds I made o &#39;yeah blah ", I quickly revised my opinion trs using these keys. If you test a Kurzweil, especially mumuse made with the switches, it is amazing!

For résumé, objectively it&#39;s not a keyboard with great sounds but ultra-ralistes Kurzweil offers a rich universe that gives trs normment of ides.

I use it for almost 2 months and I&#39;m really happy. on the other hand, this keyboard is stopped recently: I have long wanted to have the world in my Kurzweil instruments (I tried a PC-88, 10 years ago ...) and the stop this keyboard I was able to almost half the retail price acqurir (nine 3-year warranty) in opration "all the world DGIG!" Thomann. This keyboard was too expensive for a 61-key without squenceur and that&#39;s why he does stop. The Kurzweil dmo in store as trs rare (especially in France) is not thundering. You have to play and especially edit it to understand that the price justification silent ...

Since I n&#39;embte I edit more complex performance patterns on my Fantom. I cr setups that drive the Fantom has largely goes faster! In any fawn, switches are all over this keyboard is a factory CONTRL!

Kurzweil possde a reputable standard and is really MRIT. I&#39;m so glad I could finally buy a Kurzweil, this keyboard is a gem!