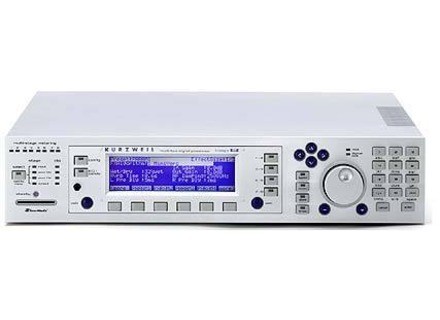 kurzaddict's review (This content has been automatically translated from French)

Kurzweil KSP8
5
Nice machine that have, in total, with 8 inputs, 8 outputs, eight effect busses (eight stereo or mono or 4 surround5 1 1 + 1 stereo) all fully routable, confusing and re-routable. Balanced input jacks 4, 4 ditto output, plus an ES AES / EBU for use in S-PDIF (if you can find the appropriate cable).
Everything is digital, and when using the AD / DA converters of the corny one is not disappointed (very clean and quiet, they explain in part the high price of the machine ... well it&#39;s Kurzweil) .
Options to set the ADAT, add 4 analog I mLan or even if one relies on a techno poorly tolerated whose drivers are generally unstable.

The bug is not everything: it lacks, to be truly complete, a pitch-shifting algorithm and a correction of intonation - these are the only two things that I can possibly blame him. If you have an Eventide Eclipse, so do not sell it right away

Everything is editable (except algos, mouarf!). In summary, we have the algo (reverb, chorus, etc.) -> preset (algorithm with its parameters) -> chain (a series of presets connected in series) -> bus effects (all "package "with the more specific setting of the modulation control over MIDI) -> Studio (config bus routing + effects). And by the way, EVERYTHING is editable (again: it&#39;s Kurzweil, eh). Routing is almost perfect (only regret we can not associate to a MIX bus as you would with the channel "AUX" on the K2600 - the initiated will understand - but by re-entering the signal in the animal while it works as well!).

At no time have I felt that the brochure advertising the vehicle "embellished" his features!

Ah, yes: MIDI IN, OUT, THROUGH, each bus can be controlled by a different MIDI channel, and everything fits in a 2U rack. The fan is a little noisy, just to rattle on principle.

No editing PC or Mac.

I know of no effect processor as powerful. In short: you are entitled to use 16 U or less as desired in the machine (to be divided between your bus effects, so). A "U" is an effect unit. A simple reverb, for example, uses a U, while a guitar combo with reverb and chorus will consume (head) 4. It therefore leaves plenty of room to play! I&#39;ve never seen (but chuis young after all) a multi-effect capable of such power.

Note to pocesseurs of K2600/K2500 with KDFX: bah in there, there&#39;s (I think) 4 times the power of a KDFX, with the same presets, PLUS some extra (I did more head) . Its level, we can achieve the same result with input sampling KDFX + + programs "Live" on Kx00, but hello and goodbye discomfort power ...

Only regret, therefore, the correction of intonation, but we can not have everything-plus!

Ah, well, yeah: on each of 8 inputs, we have, blackjack (ie without consuming U), parametric equalizers for two options (high-shelf, low-shelf, bell, notch, but also generating noise, distortion, etc.: a y&#39;en 30aine available !!!). Oh damn ... It is well worth a 10, with that!

Configuration very simple from the moment we realized the chain algorithm / preset / chain / bus / studio. I am used to K2x00 Kurzweil, and programming is done in the same way. Menus and submenus are nested but fairly logical when you&#39;re on "something" editable, simply press the "Edit" to edit it, and "Exit" to leave.

Editing is easy, and all shares immediately agree on the machine. Possibility for each parameter of each algos (!) To associate a physical controller (MIDI) or virtual (LFO, ASR, tempo, ...), with high value, low value and "depth" (bah as K2x00, what)

The manual is clear and well done - but you really have to read to understand how the thing. The reference manual (which only repeats each algorithm and describe its parameters) is still 300 pages (with diagrams).

The edition is going on with the parameters that are expressed in physical and / or human! For example, delays are expressed in "frames" (ahem) but ms or BPM. The heights of cut filters are given in notes (A3, C # 4, etc.) which makes their use much more enjoyable.

History of bitching: the buttons on the control panel are a bit "soft" to the response, I would have preferred firmer buttons for a machine of this price!

There is also an optional remote control, RSP8, which is absolutely worthless if you have one KSP8 and a MIDI controller (basically, it&#39;s an offset to the front of the KSP plus 8 knobs plus a joystick).

Ahum ... The effects .. Ouch ouch ouch ...
Overall, the presets of the machine are very good, there is already plenty to do. The reverbs are pretty neutral (TC-style), but you can make almost any warmer with eq. The chorus is very good, they do what is asked of them.
The distortion and HP simulators are absolutely shit (at the same time, it must be very dumb to think that a digital machine can easily replace a good old tube amp set properly). But, surprise: as an electric guitar on "dry" does not sound as much on a piano (electric if possible) that really makes the thunder!
The eq is great, super, super rich: there is everything and you can practically do anything with, even engage in some vocoding (oh, by the way, there&#39;s no vocoder in the machine). The flanger is impeccable (especially well configurable!).

Delays are also super-rich (August 1-tap, anyone?), Configurable either ms, or BPM. The max delay is, I think, a few seconds (5 from memory): not enough to make the live sampling. There are also gated delays (and gated reverbs). If you take the time to combine chorus + delay light, you can easily recreate the TC2290 delay and take you to The Edge.

Then we launched into the "bizarre". And then, wow ... The Fireworks can go to bed! It belches into a microphone and it generates a drum beat for 10 seconds .... Obviously, from this point of view, the presets are just there as an example (it is not in ready-to-wear effect but in the custom-made), but a little fiddling, can (and quickly) achieve effects very rich ... and be it synth, voice or guitar, one can easily be pushed quite delusions.

Oh, and I forgot: compressors, expanders, etc. do their job very well (from nbx parameters to control, the side-chain ...).

Basically, you have to stack about 4 PCM81 to achieve the same power level!
The quality is really at the meeting, as well as the ease of editing and logic of use (no constraints, as the fireworks, like "you must use the max a copy of a particular block of effect: there you can chain 8 ring mods if that&#39;s your thing!).

I&#39;ve tried quite a few multi-effects, TC and Lexicon essentially (and Digitech when I wanted to laugh

) and, frankly, the quality is worth! The Kurzweil is quite versatile, can be less than "personality" as the Lexicon out of the boîboîte but against a much more flexible and rich in the end.

If I had the choice again tomorrow, well ... I would do! The price hurts but when you think about the power of the machine, it is understood (and accepted) the price! Of course, it could have additional assets (edit - or use plug-in - from PC or Mac, vocoder, pitch-shifter, encôôôôôre more routing), but as it is already 90% of the multi sweep -effects normally consists of a studio!

Kurzweil KSP8 manuals and other files