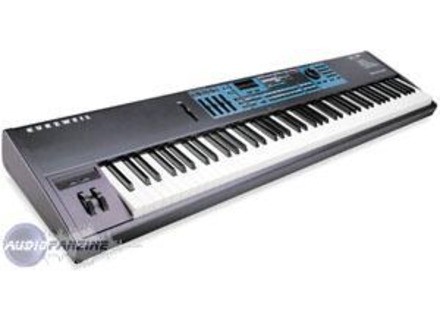 captainpalmer's review (This content has been automatically translated from French)

Kurzweil PC2
5
Everybody knows 6 octave keyboard and dusts, excellent touch and adjustable. not a touch of piano, but it is perfectly adapted the instrument is not just a piano ...
Many sounds, updates as and disposed of revolutions (always come in Kurzweil).
Connectivity of killing, say nothing.
Lack of USB can be and still ...

It's a keyboard scene par excellence.
So for fast with sounds such as factory programs, configure the set-ups Midi brief for fast is the top.
But WARNING: ds one wants to ask for more, may get tougher. Config Gnrale for Publishing of sound is quite bizarre, especially in storage. It is curiously arranged and was quick to save a sound instead of a set-up for example. Must be careful, keep calm and not working on it 4 o'clock in the morning after you cafetire the vid.
Few sounds are Paramtres ditables, but it is not truly possible a synth.
And it's also a killer keyboard command live!
I use it in config scene with a flopping rack (expanders, samplers etc ... what the former) and I appreciate everything from PC2. It is clear, clean, efficient plant has never

He SOUND. Ds when you use it again for what it is destiny.
Falling pianos, keyboards (Rhodes, Wurlitzer, Clavinet, CP 70 and 80) for killing, tablecloths will take for Peter Gabriel.
And if you install the ROM supplmentaires, just happiness.
Despite the limited Paramtres ditables, it is possible thanks to the monstrous effects to bring your personal touch to the sounds. On stage or in a mix is ​​class.
I do not notice because of the 10 organs. Some say that Kurzweil KB3 mode is a must for me either. I do not like the color of the organ sounds, too cold and not quite got my expressive. My favorite by far my VK8 (PC2 but on stage is when the same joke).

He followed me for a few years.
What I like least are as indicated above the formulations of organs. As against all other samples are striking.
There were quite a few technical problems on early models, including the motherboard problem. Namely that the motherboard is neither more nor less than an intel card (!) Which had the unfortunate tendency to put on some bulk sries.
Sries on the current situation is rtable, and the latest OS (tlchargeable) is super stable.
You should also know that even if Kurzweil is very bad (or no?) Distributed in France, there is no problem to find pieces directly in the U.S., and less expensive than the Yamaha. In addition srieux is hallucinating. I had a concern, I had to Kurzweil directly for technical info and Sweetwater to order pieces. In both cases, super pros who will move for an order for 35 of the SAV same fashion as if you asked them three K2600 X. Some pseudo technical centers in France could take a leaf, and I have the names ...
An instrument pro, the best keyboard master now I think despite the age of its design, a keyboard perfect scene.
The price of the occasion, is really worth.
If you Lorgnez a Nord Stage, but you do not have the budget, try a PC2.