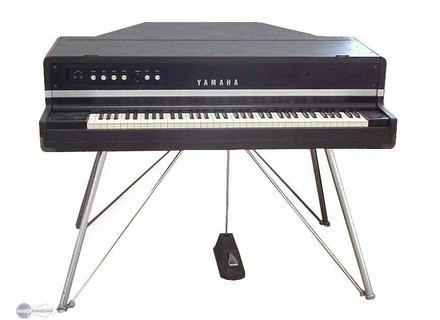 Yamaha CP-70
4
Happy owner of a CP70B for a while already, I have to say that this keyboard deserves its reputation among the Classic Keyboard. With CP80, the reference in terms of "Electric Grand".

I will not mention here the technical specifications given by the opinions of other members are already expanded in the matter. I essaireai rather to supplement with my experiences.

So we have a Electric Piano of high quality, robust and built for the road. The weight of the animal is therefore but transportation is no problem and the weight is well distributed. In my case, I do not think it will move to me first because I do not have the original boxes and then transportation because there are now much more portable keyboards in concert situations .

The piano fits in very little time and very easily. less than 5 minutes and is ready to play! legs supplied with the piano are robust and can no longer stable.

For tuning, like the CP70 very good agreement for long periods without being there I too need editing. This is a controversial topic (which is also the subject of a thread on the forum) but my personal experience, I can say that it is possible and absolutely satisfying to make the tuning of self-CP70 even if we are a little resourceful. I gave the mine using a standard tuning key and a BOSS TU-12H and I must say that the result is me fully satisfactory. This is all usually done in an hour.

Concerning the use, this was initially a shock on the keyboard, which I had a Rhodes, Nord Stage and Hammond.
The keyboard of the CP70 is a real piano! At first I thought it was heavy but once you're used to it, we love it and it is ultimately the other keyboards that seems to have a light touch that have nothing comfort from that of a piano. Perhaps the CP70 has he instilled in me my first caprice pianniste! Anyway, it is a pleasure to lay hands on the keyboard!

In acoustics, the fact that it does not sound very hard is really enjoyable to have fun at night without disturbing anyone, even if there is anyone who sleeps. And that's great!

The side of the sound, no surprise, this is "THE" Electric Piano sound par excellence. Recognizable among all others and innimitable. Nothing else in the world sounds like the CP70. This is his signature! Solid, crystalline and metallic at times (in a good sense).

Tremolo proves surprisingly versatile and tasty. The equalizer is effective for its satisfactory without being great. However, I find that the Treble knob tends to sound very tinny when the CP70 mounted. it is a shame because the absence of high frequency boost lacks a little research when certain sounds. A dedicated EQ pedal or amp EQ will fill this weakness.

Concerning the effects loop built, this is an option that is highly appreciated and is doing very useful! However, the output level of the effects loop is quite low and far from today's standards. This does not, however, hinders the same operation.

The overall output level Via Jack quarter is also low for active electronics.

For amplification, I had the chance to try with many amplifier (Twin Reverb, Ampeg B-15s, Gallien Krueger 800RB etc..) And one that fits him best is the Roland Jazz Chorus. The two get along really well. JC really puts the CP70 value with a rich and clearly defined sound. adding reverb and chorus is legendary also put the icing on the cake.

I like:
Its sound-signed legendary absolutely innimitable
-His personable indescructible instrument and beautifully built
Its ease-transport / Installation (If I could Cases for)
-The feeling of playing on a REAL instrument has its own soul
Its low-volume acoustic which allows you to play late at night
-Ability to keep a good tuning time

I like least:
-Son of treble EQ knob that makes the nasal CP70
Its low-level output (loop outputs and 1/4)
Some find "Limited" but the old EP's do it not?

Moreover, this piano is not to today's standards and it is normal. It is heavy, cumbersome, limited, has some flaws technically (Output Level Efficiency EQ) and expensive to obtain. For those who want all the sounds in a box, there is the North for that!

But finally, I love it and I think never get rid of it. I would do this choice without hesitation.

virtuasound's review (This content has been automatically translated from French)

Yamaha CP-70
5
I use it for more 10 years is not only spares me .... incomparable sound and touch ... Two inconvnients the weight! And it must often leads connected APRS transport ... This is the price of the electroacoustic ...

virtuasound's review (This content has been automatically translated from French)

Yamaha CP-70
5
I use it for more 10 years is not only spares me .... incomparable sound and touch ... Two inconvnients the weight! And it must often leads connected APRS transport ... This is the price of the electroacoustic ...
Did you find this review helpful?yesno
»

azilys's review (This content has been automatically translated from French)

Yamaha CP-70
5
The electro-acoustic piano years 70-80 par excellence. 8 in all of 1975 MODELS 1985: CP70/80, the CP70B/80B (with XLR outputs), the CP70D/80D (with a graphic equalizer) and CP70M/80M (identical to D MODELS with a MIDI keyboard to contrller 2 channel thanks to a system that split). The CP70 has a keyboard 73 ratings, while his great ERRF the CP80 has a keyboard of 88 notes. Since MODEL B, the CP70 has two outputs and two XLR jack on the left ct (jacks that come with the piano, Yamaha thank you !!!). Ct on the right are taken for food (a cannon plug 2-pin) and switch. On the front panel (CP70B/80B), there is an insert effect to add a chorus or reverb for example. By a string in the bass notes and two strings per note. A micro piezo under each note, arranged on the frame. A report also trmolo Intgr which in the ballads, is the most beautiful effect!

What about the touch, except that he is exceptional. So it's a real piano touch is that of a piano 1 / 4 tail. It is quite right dr same, but combined with the sound of the instrument, it allows a large trs expression and provides standards for gaming sensations However, it should spend some time on it to find her. Must rgler qualisation of the Manir what the sound is homogne. I use a rglage like this: I cut the bass (potentiomtre of 4), and I boost the mids and treble (potentiomtres of 6). The CP70/80 is easy to use. The models of D and M, the qualiseur can be active or bypass which allows even more flexibility on the sound. The models of M, we can bypass the MIDI transmission and change the split point. The manuals for MODELS B, D and M are still tlchargeables in PDF format on the website of US Yamaha.
Some inconvnients however: first weight (62 kgs for the keyboard part, 68 Kgs for the tail). It is better to have friends or truck dmnageurs vicinity of the machine! Other inconvnient the age of bte. These pianos trs age well but no longer find replacement spices. Yamaha stopped production since 1997. For strings, this is for strings of traditional stringed piano Yamaha grand. For cons, the other strings are specially (matriau diffrent) but in case of breakage of strings, just go see a spinner piano strings for him to redo the same or Contact Mapes the socity (manufacturer of strings) grace their site: <a rel="nofollow" href="http://www.mapeswire.com/." target="_blank">http://www.mapeswire.com/.</a> Beware also the diet that, by its connection specially trs, is difficult to replace today. There is a mthode to replace on this site: <a rel="nofollow" href="http://www.oceanbeach.com/ches/daves_gear/cp70ps.html" target="_blank">http://www.oceanbeach.com/ches/daves_gear/cp70ps.html</a>
The beast is difficult given, especially in the bass. This is of its architecture. As the frame is small, it is about strong deformation of the tension of the strings. As these pianos are prvus for scne Originally, they are subject to dplacements. However, I noticed that the agreement did not move as a APRS transport. Care must be transported and handled with prcautions. It is convenient to have a cl agree and corners in order to alter the agreement if necessary.

The sound is unique. To see this, just listen to the ballads of Phil Collins (Long Way to Go, Groovy Kind of Love). Main users: George Duke, Peter Gabriel, Phil Collins, Herbie Hancock, John Paul Jones (Led Zeppelin) Michael McDonald (Doobie Brothers), Art Mengo ("Live at the Mandala").
I am a jazz pianist and I was afraid to beginners to use the CP70 in the quartet in which I play. Simply because the CP70 has a sound particulire trs, trs round hot trs. DCID I use it on a model of the quartet to try, and surprise. The CP70 provides a color particulire and much more intimate than a traditional piano. Combined with the Rhodes, is a marvel. A small and lightweight rverb chorus on some tracks and you&#39;re jou.

I bought a CP70B in June 2004. I rvais years. When I jou a CP70 for the first time, I knew I could do without. But I have a lot of possible questions. Will I be able to play in all styles of music, is that the sound is not too typical? I actually DCID to make my personal color. I do not sell it for anything in the world I feel, color, Aesthetics. This piano is a marvel of architecture. Imagine a piano is spare in half and that is perfectly equilibrated (I do not have reinforcements on my own feet, and do not stand prevents !!!). The CP70/80 worth around 8500 to 10000. The hill is used around 1500 - 1800 for CP70. The MODEL is the most common CP70B. Can not get information from Yamaha for the SERIES numros because they do not keep archives on electric instruments (only for piano and this, for a period of 50 years). A sound irreplaceable, inimitable just ... Good move, a final site for lovers of CP70 and those who will become one. These are the most beautiful pictures of CP70 I&#39;ve ever seen: http://www.cathedralstone.net/Pages/YamahaCP70B.htm

Did you find this review helpful?yesno
»
Read the 5 user reviews on the Yamaha CP-70 »

Yamaha CP-70 manuals and other files