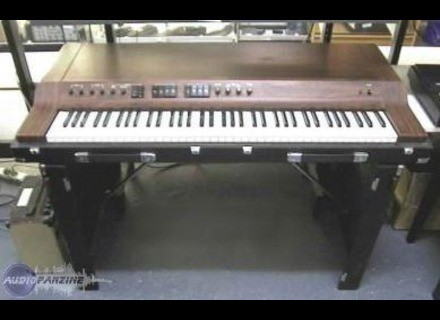 Yamaha CP30
4
The Yamaha Cp 30 is an electic piano that has a very unique and different sound. Very rich for its time. The Yamaha CP 30 was actually one of the most affordable electric piano’s with good quality back in its production time. Most other brands that where very good back in the day create digital piano’s that where great quality but cost a lot. So during that time Yamaha came out with the CP 30 and I guess you could say undercut a lot of other brands and that’s how the CP 30 became so popular. The CP 30 is an electric piano that you really don’t want to take it anywhere. You pretty much want to keep this at home. From my personal experiences its pretty fragile. I have had a lot of problems with this. Maybe I wasn’t being careful enough or something but it seemed like every time it got moved something else got messed up. Also the jack where the pedal plugged in at ended up getting a little loose and we had some issues with keeping it plugged I correctly and even had to rig it up with some tape in order for it to work properly.

Not that our Yamaha CP 30 was defective it was just through a lot with all of the moving and transporting it from place to place eventually it just starting messing up on us. But its definitely worth the money spent and you can never go wrong with a Yamaha piece of equipment. I loved playing jazz music on this, though im not a pro but I can mess around with some jazz chords and they sound great. A friend of mine has always played classical pieces on it and it sounds amazing. Every single sound bank that it comes with has a very thick solid classic sound that you will love. I am not too sure what these are selling for now as far as the price. But im pretty sure the price isn’t too bad if you can find one.

Yamaha CP30
Analog piano from the '70s, sturdy and heavy (about 95lbs). Its name might have you think it's the smaller sibling of the CP70 and 80, but it isn't... This one doesn't have any acoustic mechanisms, only electronics. The sound is very typical, rather mellow like a Rhodes or a Wurlitzer, or a clavinet, but with its own peculiarities.

The piano has 2 voices with 4 presets, which can be mixed together (piano1, 2 and the two other harpsichord-like sounds), an adjustable tremolo effect on each voice (speed, intensity) and a pitch for each voice (chorus). Three stereo outs, voice 1, voice 2 and both mixed together.
The keyboard s heavy, the action and the response imply a very percussive sound (to exercise the fingers).
In principle, almost all cp30s I know buzz pretty loud, it's one of their main characteristics!!
Anyway, it's an old-time analog piano, very sturdy, with its own personality and very, very good sounds in the genres described above. A very good alternative for people who can't afford a Rhodes, a Wurli or a Clavinet, but who wish to have a nice vintage piano.
It's worth it alone for its price and sounds, but it also looks awesome!
Oh, yes, I forgot to tell you that it was a fav of very big names, like 'Herbie Hancock at the end of the '70s.
Did you find this review helpful?yesno
»

Yamaha CP30
Bought it in the '80s, but I still use it. It's sturdy, rather heavy to move (90lbs) but it's excellent. Very stable, the case transforms into a stand and it allows you to place other keyboards on top.

The keyboard is piano-like, very similar to a classical piano. So it allows for everyday work. On the front panel you have different pots to adjust the settings (they are not digital, but still good old electronic controls). Two mixable voices with tremolo and chorus. Each voice features 4 choices ranging from piano to harpsichord. The mix and frequency delay results in very nice combinations.

I preferred to buy it over a Fender Rhodes due to its price. With the adequate amplification it allows you to get very similar sounds. I have never used the harpsichord onstage, but the sound is realistic.

The (stereo and mono) outputs are of good quality and it has a pedal input. It's a bit noisy when cranked up, but nothing too annoying.

In short, a good unit for people looking for something "vintage" with that analog touch. It seems to be pretty demanded again nowadays (due to its sound and look). Its price is low (if you find it!), so don't miss the opportunity! I already have mine and I'll keep it!!!
Did you find this review helpful?yesno
»

Yamaha CP30
- How long have you been using it?
I've been using it for one week.
- Which features do you like the most / the least?
What I like best is the dynamics of the piano, it is very expressive.
You can play very softly but also very percussive, like a clavinet. The keys
give an odd impression, especially when you are used to a real piano, or
to spring keyboards.
What I like the least is its weight (100lbs), but that's the price for
its ruggedness and impressive build!
- Did you try any other models before buying it?
I've had the opportunity to play digital pianos (yamaha, roland and korg) but
I really wanted to go for a "real" vintage instrument, and since the Rhodes and Wurlitzer are
very expensive, considering that they are trendy right now, I opted for this piano.
- How would you rate its value for money?
I bought it secondhand to a studio for about $400 and
it's simply great to play jazz. You only need to
open the cabinet to see what's inside: It's the Rolls Royce of electronic pianos!
Did you find this review helpful?yesno
»
Read the 5 user reviews on the Yamaha CP30 »

Yamaha CP30 manuals and other files