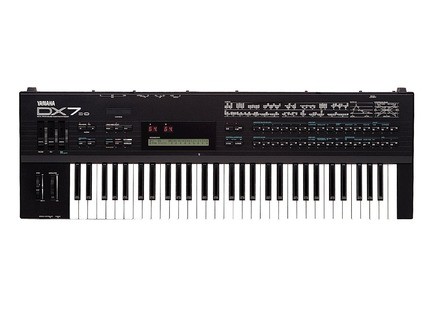 DX7 IID, Digital Synth from Yamaha in the DX series.

Yamaha DX7 IID
4
I believe It is one of the first synths with midi, so there is room for improvement, the user interface could be made better (like having sliders / knobs etc.). there is no filter (accordig to my knowledge because i still haven't found one

Traded it for a cheap behringer mixer

I don't have the manual because i traded it with my music teacher for a mixer, but i sure have problems with programming this thing, but i guess it all can be learned.

I like the sound it can make, nice basses, bells, rhodes painos etc., it is usable for lots of styles i guess altough i use it mostly for bass in my &quot;trance&quot;songs, but the downside is the lack of reverb, phaser etc.

It is made with a solid metal case, it's like 15 years old now and all the original things are still on it's place and everythinh still works, not even a scratch on it

I sure like it, altough it should be easier to program.

Yamaha DX7 IID
5
For the price it is really well specced. Compression on every channel, 2 effects busses, 16 inputs etc etc.

Really really easy. The manual is amongst the best I have encountered. Is easy to follow, it goes into depth about what to use the various effect and compression presets for. It is easy to find an answer if you get stuck. Even though this was essentially my first musical mixer, and I knew nothing about aux sends etc, I did not need the manual to get started, it is very intuitive.

I have had 2 little problems. One of the effects rotaries has a slightly dodgy contact. The parameter wheel kind of fell in a little bit, but this was easily rectified.

Although it's a digital mixer, I am really happy with the sound - it's an honest representation, but doesn't sound clinical. I cannot fault the eq, effects or compression.

I absolutely love this mixer. It does so much it just begs you to try different things. The memories make things so easy - save all your settings with the song, and quickly switch to the next. This is one of the very few things I own where I am continually delighted by new things I find it can do, even after having had it for 2 years. Everything you find you want to do, it has already been designed for. I would wholeheartedly reccomend this mixer. It's hard not to love it

Yamaha DX7 IID
5
Level features, soft touch keyboard 61 notes, polyphonic aftertouch.
Internal memory of 64 sounds "simple" and 32 performances (combination of two sounds). Ram4 cartridge slot (very hard to find).
Compared to the first DX7, it is bitimbrale. It can transmit on two different MIDI channel. It can therefore be stacked or split two sounds. The DX7 IID and IIFD are identical, only difference the floppy disk drive 3 "on fd 5 (floppydisk).
The dx7S is itself an updated version of the first DX7 (monotimbral).

The config is very simple
The edition on the other hand is a bit more complicated, it takes some getting used to.
As for the programming of sounds, it's making big head, unless you are an engineer specializing in FM synthesis.
The original manual is very well done, and is also a large PTT Botin.

The sounds are absolutely fabulous. It's a synth legend who knows almost everything.
on the other hand, no effects, no sequencer, no gadgets, it's hardcore!
Very good: Rhodes-style electric pianos wurli
- Style electro bass
- Groundwater style analog
The good: everything else

Yamaha DX7 IID
5
The DX7 is well known, and the DX7 II D or FD is a very attractive development. Remember that this is a digital synthesizer FM synthesis based on six oscillators which can be transformed into LFO. (Operators in the language FM) No sample, no PCM boring. The DX7 is the synthesis of a pure state. It also has a fairly complex LFO and envelope generators 6 comprehensive. They also play an important role in FM synthesis. seventh envelope generator is assigned to the pitch (pitch), which can produce interesting effects.

The keyboards really nice to play, is sensitive (adjustable to 6 oscillators independently of each other) and has aftertouch, assignable to several modulations. The polyphony is 16 voices, or 4 voices with adjustable detune between them, if you want a really thick sound (for those who love Italian Dance ...).

Finally there is a random tune on the keyboard. So it&#39;s not just the gypsy violin playing ... gypsy. It can even be fun to change the temperament to play the Baroque more realistic, for example! (This is new compared to the DX7 base)

But the highlight of the DX7 II is that you have two in a DX7! We can superimpose the two patches on each other, or split the keyboard anywhere on this one! As against the polyphony is found halved. It has something for nothing ... but the sound becomes enormous if desired, or super subtle.

South side, the DX7 II is very complete, unlike his elder. Finally we may regret the absence of arpégiator or sequencer, contrary to what is offered on a map Supermax DX7. But there is a map E! Grey Matter for DX 7 II.
Originally, it has 64 memories and 32 performance, you can double RAM with a cartridge. The FD has a floppy drive that can store lots of data, but is not practical Utilia. It is reminiscent of the DOS ...
I give him high marks because, after all, the DX7 II is very complete.

The DX7 is known to be tight enough for neophytes, or simply if there is no user manual. The DX7 II brings to this level a marked improvement thanks to its large backlit display, these pages and navigation simplified. FM synthesis is not what is easiest to address because there are many different parameters to master if you want to get what we want. We can also spend hours, and this is quite exciting. Of course, do not approach the instrument with the prejudices of the classic subtractive synthesis and it really is another world to discover, and it is endless.
The DX7 II is more advisable than its big brother, because it is easier to use, yet comprehensive.

Small problem, however, there are no instructions in French. It can take one of the DX7 to understand the general principle or otherwise, must be proficient in English .. or German.

Finally there are a lot of software that simplifies programming through a computer.

The DX7 is suffering from a ton of prejudice all as wrong as each other (except for the ergonomics ...) No, the DX7 does not know that sounds cold and metallic. No it is not made to reproduce only the sounds of &#39;80s pop (though for those looking for that, it is a must) And anyone who claims to know everything and have toured the DX7 is a true pathological liar or he really had next to it. For it is true, we may well have mixed feelings if the copy on which you fall is programmed with sounds pouet-pouet while sucks, by someone not knowing to use it as it happens sometimes. But this is not definitive, because nothing is fixed on the instrument.

It is simply the most impressive synth I know, the Prophet 5 and Minimoog. It can be powerful or subtle, gently heavy or "pie" (the humor is not forbidden), it can be air or aggressive. With him everything is possible. Rhodes pianos are known, the organ can be skinny like a Farfisa or Hammond as a heavy ... If you dream of the copper of the CS80 unaffordable, no problem on the DX7 also. And above all, he does everything else, because it is terribly expess. You can do everything with, from jazz to black metal (terrible!) Via pop, industry or funk, electro, hip-hop, zouk for lovers ... and contemporary music for the most advanced research. Either way sounds can be so much richer and beautiful than we even need pouurait multi-effects.

The DX-7 II is really a very nice instrument ... very mature and very robust, which I think is for real enthusiasts. Others tap into the endless library that exists for him, but honestly, the best thing to dive into it.
My rating may seem high, but it seems justified.

Did you find this review helpful?yesno
»
Read the 7 user reviews on the Yamaha DX7 IID »

View the 9 files about the Yamaha DX7 IID »