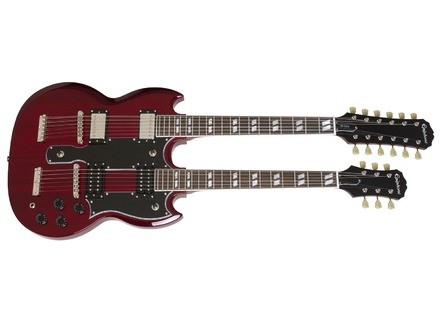 Epiphone Limited Edition 2014 G-1275 Double Neck
4
I bought it almost new, its previous owner decided to sell it after playing it only a little. It’s from 2014 (Limited Edition).

This guitar’s main asset is its killer look. It cleartly won’t go unnoticed, not even in its rock bag!
When you open the rock bag, you find a well-manufactured guitar, really well finished, with no doubtful adjustments and a beautiful mahogany color. Inlays are beautiful, even though I doubt they’re made of genuine mother of pearl. Both necks are equipped with very good-looking ivory-colored bindings. Of course, the myth is heavy to bear, just as the guitar is with its 16 lbs. As far as aesthetics is concerned, it’s a real success and a beautifully-made Korean instrument. A little cons for the hardware and especially the tuners that are not really precise and that will have to be changed (for Schaller ST-6K for instance)

Playing it unplugged reveals a rather important sustain (nothing surprising considering the mahogany surface involved), and its balanced overall tone comes as a good surprise.
The XII-string neck’s sound already sounds rather massive. You can play it while sitting, the comfort won’t be optimized but you still can manage to play this way if you find the right position. Contradicting what I’d read here or there, there’s no risk selecting something unwillingly with your pick, as the selectors are not that awfully placed.
The XII-string neck remains the easier to play, it is higher plus it can be played without being disturbed by the 6-string neck – the same can’t be said of the latter.

Here comes the comment to get up, strap the guitar and plug it in an amp.
First, strapping it comes with a surprise: the guitar bends forward. Yeah, necks bring weight and the problem with dual necks is that they’e impossible to balance. Playing hence gets even more difficult, as you won’t only have to play the guitar but also to carry it by the neck! No joking around…
Of course, carrying it this way during an entire show is not even to be considered. It soon becomes exhausting, even if it’s a real pleasure to play – every second, every note.
So, I plugged it into a Boss GT-5 associated to a Roland Jazz Chorus 55, then straight on the JC-55 and also on a Vox Pathfinder 10.
It took me some time to find a setting that allowed to take full advantage of the beast and its sounds. Overall, it has a little more trebles and mids compared with bass to my taste. In brief, it spits fire, even with an action set awfully high and pickups set terribly low.
On crunch sounds, it’s a real pleasure, blues comes naturally, so does rock of course, the very essence of the 1275. For distorted sounds, like for really, heavy sounds, it works all the same, the humbuckers do their job.

It’s time we evoke the switches and pots. So we get 3 switches with 3 positions each, one for each pickup selection and one to select the active neck. Hence, it’s possible in the intermediate position to select both necks. The resounding sound brings a nice little something. However, they don’t sound as loud when both selected as they are then split. Regarding the pots and control knobs, there’s a volume and tone control for eack neck.

The outcoming sound is great, the pickups do their job and I must admit this was my main concern regarding this guitar. I tried Stairway, Tangerine, Knocking on heaven's door, Have you ever seen the rain and a few others. It just sounds great. Great sound balance, the “XII” neck brings depth on rhythm sounds, and the 6-string one is great for soloing.

After almost 5 hours playing it in 3 days, I can say I’m not disappointed at all to have been able to access such a dream so reasonably priced (the EDS1275 is definitely not). The only cons I could find on this beautiful, limited edition model is its tuners. For the rest, nothing to complain about, the guitar sounds good and it’s not something often seen – or owned. If you manage to find one (used or new – there are still a few here and there) and you feel tempted by it, don’t hesitate, go on and buy it!

[Musikmesse] The Epiphone SG Doubleneck is back

Published on 03/15/14
Upon general request, Epiphone reissues the G-1275 Doubleneck guitar, a limited edition that is exposed at Musikmesse 2014.