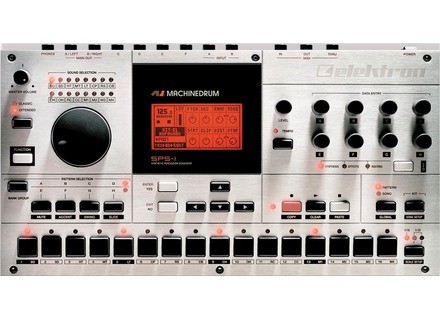 Machinedrum SPS-1, Drum Machine from Elektron in the Machinedrum series.

Elektron Machinedrum SPS-1
5
Paid $1150US
Store: novamusik.com
As a Techno producer looking for futuristic, high-end percussion sounds, the Machinedrum, loaded with effects, filters, LFOs, a kick ass equalizer and even a compressor (not to mention the best sequencer I've had so far), offered all I was looking for.

1- If you can dream it, you can make it: From cold,electro type percussion, to warm, deep tribal sounds and everything in between (including some filtered pads, LFO'd bass lines and more), the possibilities are endless. You can say anything you want about your 909s, 808s, JoMox, whatever, I've played with them all... NOTHING compares to a Machinedrum as a stand alone unit.
2- Sequencer heaven: When I made the concious desicion to make electronic music using machines, rather than a computer, I decided everything I bought would have a sequencer of some sort. Having said that, the sequencer in the Machinedrum is my favorite. 16 tracks for either internal sounds, external gear, and any combination in between thanks to ingenious "midi machines" that convert tracks into controllers that go beyond simple note imput sequencing to controlling effects, filtering BY NOTE (up to 64 different parameters per note, if not mistaken).
3- Better built than Angelina Jolie.

My one little qualm with the machine is the distortion. It's not as crunchy as I would like (in general the sound of the Machinedrum is rather clean, and you can get dirtier stuff, but it would be nice if the distortion were a lot more..."distorting".
Other than that, I'm really the wrong person if you're looking for somebody to diss' this baby.

If you are a freak for techno, percussion and verything cool, you are a fan of the Machinedrum . If my machinedrum were lost, I would cry and buy 2 more.

Fairly easy to use. At first there was quite much trying and testing things out, there is so much to edit.

It's build very well. I haven't find any falws yet.

Fairly impressive sounds. I couldn't imagine it as only source for drum sounds.

As I said, I couldn't think it as only source for drums. That's because of my style and taste. Still it has added great things to my music (you can check my songs from www.download.com/deadzone).

Originally posted on FutureProducers.com
Posted by: deadzone (January 0-, 2005)
Did you find this review helpful?yesno
»

Elektron Machinedrum SPS-1
5
The Machinedrum is 16 multitimbral. There are 16 tracks that form a Pattern. Each track can use a single 'machine'. Configurations of these machines form a Kit. Kits are saved independently of Patterns. Patterns need not be saved as they are 'hot' in the sense that when changes are made, such as adding new steps or making a pattern lock, they are entered real-time. For this reason it is often a good idea to copy and paste your kits as your work on them. The pads are not velocity sensitive. Some people think this isn't good, but it is suitable to the functions of the Machinedrum. Creating volume and timbral changes is what Accent and the Parameter Locks are for. If you want live synthetic drums you can hook up a drum-pad to the Machinedrum. The OS can be updated through MIDI. Many new functional features have been incorporated into the Machinedrum since its inception. Even new machines have been added or improved. It has MIDI in/out/thru. Live performers will be happy to note that the Machinedrum will control external synths sending up to 3 individual notes per step. This is made possible by the MID machine - a great feature for programming basses, leads, and stabs that are in &quot;groove&quot; with the Machinedrum's precise MIDI timing and programmable Shuffles. Routing capabilities for the Machinedrum are flexible. A single sound could be bussed out of an individual output, back into an input, filtered and modulated, then sent out again out of another individual output. Such patching ability will allow you to set up your own insert FX send and return. The main stereo outputs can be configured to act as individual. The ability to define 8 Global settings will allow you to quickly load different sync, MIDI, and control maps for different environments. The kind programmers at Elektron knew you would be taking the Machinedrum on the road and to all your friends studios. It's packed with features and now with improvements. Elektron have listened to their fanatical fanbase and have incorporated requests (such as the ability to change a pattern on the fly with one hand so your other hand can still tweak parameters).

OS v1.12 I've owned the Machinedrum for a few months now. It is by far the most user-friendly piece of kit I have ever owned. All menus and knob controls are well integrated and are easy to access. The Machinedrum has two modes of operation - Classic and Extended. In Classic mode the sequencer merely triggers corresponding sounds from various kits. I use Extended, which allows for control changes and pattern locks to be implemented. The Sequencer is straight forward and can be used in Step mode, or Real-time record. The best thing is you can record and save on the fly. The Machinedrum is always &quot;live&quot;! Editing patches is simple and musical. Once you have constructed a general kit sound and have saved it (to one of the 64 kit banks) you can then proceed to use the Machinedrum's Pattern Lock feature to sculpt individual steps, radically changing the sounds in the process. The manual is good and is recommended to read to understand some of the finer points. For instance, when the Rec button is active and you use Function-Copy it will copy parameters from your active menu (LFO settings, machine, kit, etc) or will copy a single track (including the machine assigned to it and all the parameter locks) if there isn't an active menu. Other things are intuitively figured out on your own (for instance copying a single track in Classic mode, pasting it, then switching back to Extended will only copy the steps and not the machine or parameter locks). I have used complicated and powerful interfaces before (FS1R, ASR10) and simple ones (Roland-groove series). I appreciate a well designed OS and the Machinedrum is among the best. It will never get in the way of your music making, rather it will enhance it.

When I first recieved my Machinedrum, there was some &quot;bleeding&quot; on the main output (and headphone output). I returned the Machinedrum to Elektron and it was promptly fixed. It has only crashed once, and that seems to be a very rare occurence among Machinedrums indeed (I was trying to copy a Global setting, an unlikely procedure). As the OS is updated I'm positive that any remaining bugs will be ironed out. It is built very well. Brushed aluminum with a good weight to it. The Knobs are plastic, too bad they aren't metal. The Machinedrum could be used as a defensive weapon to ward off mesmorized rave kidz if the need arises.

Well this part I could go on forever about. Simply put I feel that this a very responsive percussion synthesizer. The sounds that the Machinedrum can make are constantly being discovered. In the right hands, the Machinedrum can create moving melodic and textured rhythms that are not typical of static samples. If Kraftwerk's ManMachine exists - this is it. Funky-robo beats at their finest! The synthesis consists of 4 primary synthesis types: TRX - analog emulation EFM - frequency modulation E12 - samples in memory (do not be fooled, these samples are fodder for sample start, retriggers, and LFO modulation) PI - Physically informed synthesis for acoustic sounds. Also: GND - provides SIN, pulse and noise waves MID - for external MIDI control. The Machinedrum has good EQ and filter FX. The Reverb effect isn't a Lexicon but is of decent quality and has charisma. Unfortunately, I find the distortion a bit weak though it remains effective on bassdrums and basslines. Some of the machines (such as the new 909-ish Bassdrum 2 from the TRX synth) has it's own distortion parameters that are more effective. The ADCs and DACs are absolutely pristine. They are &quot;prosumer&quot; grade, Crystal 24 bit 96kHz in an analogue subsystem. Low crosstalk Burr&Brown amplifiers. Most synths do not have this level of fidelity. There is no option for digital or S/PDIF out but isn't missed. The Machinedrum is essential for all electronic music genres and well suited for experimental music of any genre. Even with real-world percussion the Machinedrum is at home.

The Machinedrum is hooked up intravenously via a MIDI cord to my cerebral cortex. I would die if it were stolen! I wish it had sampling and even higher step resolution. Before I had the Machinedrum I fiddled with soft-samplers trying to get the right percussion sound. I love samplers but the Machinedrum has such a great interface and character that it begs you to play it. I have a modified camera case with room to pack a lunch that I store it in. I bought it instead of a laptop as I realized at the end of the day, sometimes I just want to hammer out a good groove and have fun. Highly recommended.

Originally posted on FutureProducers.com
Posted by: Unknown (January 1-, 2002)
Did you find this review helpful?yesno
»

Elektron Machinedrum SPS-1
5
The design is almost flawless...I say almost because it does have one glitch...I have to constantly reload whatever kit i am using because some of the sounds change when I am using midi(slave editing my sequences from my rm1x) BUT..not only can you use the machinedrum as a slave,but you can also trigger individual patterns individually AT THE SAME TIME! using the MD internal sequencer and paremeter locks)..killer feature..

Hell yeah! super easy xox interface.i was up and running immediatly...also I have had this unit for over a year and i am still discovering sounds i didnt even know where there.

Warning! This is definitly a digital drum machine...some of the basic sounds are a little &quot;tinny&quot; and a little bit thin..however the tweekability and the variety of sounds you can make more than makes up for it.if you are still set on using an analog drum machine,you would have to buy a whole rack of effects to do what this thing does...Reverb,delay,distortion,compression...this thing does it all...and the EXT inputs are awesome..I am still going to buy a Tr-909,but I will definitly keep the machinedrum.

Rock solid machine.played several gigs with it.the only problem i had is because i live in the desert and its super dusty.the machine just locked up one day.it wouldnt even load the OS..so naturally i took it apart.all i did was blow a bunch of dust out of it with a can of compressed air and its worked fine since.I even uploaded the latest OS.

All around a super piece of gear.Used by Roonan,Autechre and 440hz.If you want glitchy sounds and you dont want to use a laptop then this is the way to go! the timing and resolution is superb. esp. if you are using the MD's internal sequencer and syncing up.

Originally posted on FutureProducers.com
Posted by: Unknown ( 6-, 2005)
Did you find this review helpful?yesno
»
Read the 19 user reviews on the Elektron Machinedrum SPS-1 »