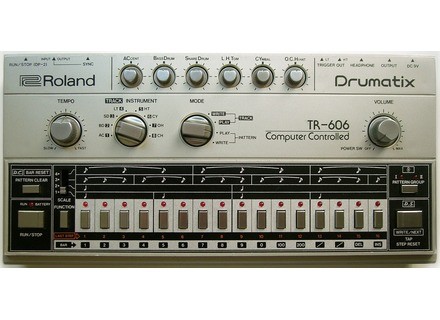 TR-606, Drum Machine from Roland in the TR series.

- The Midi connector allows syncing with any sequencer and the trig output allows you to sync any old cv/gate device. It's not high-end but it's still ok.

- Only one audio output but the unit has volume controls for each instrument.

The sequencer is also extremely simple but very effective. A 5-year old kid could create a loop within a couple of minutes. The internal memory is a bit low: 32 patterns max.

Although the device doesn't have any effects, you can hear some sort of auto-compression as soon as bass drum kicks in and that's what gives the device its groove, a slight pumping effect is audible on the hi-hat and cymbals with every beat: it grooves!

The sound possibilities are nothing out of this world, they can't be edited, and you'll only get an aggressive sound if you add a multi-effects processor. With a cheap guitar distortion pedal you'll get a low-fi hardcore sound...

Because of the few editing possibilities on the unit, you'll rapidly go back to basic rhythm patterns with sixteenth note hit-hats, a straight kick and an ultra kitsch snare... The craziest will probably try to play zouk with the snare, but that's been done so many times before that's it's easier to use a sample rather than buying this device. I haven't read the 200-page user's manual, it's more complex than a TR user's manual!

I used it for minimalist acid house and techno rhythms. It surely still has a place in a hardcore or hard-tech setup nowadays but it can't compete with a Jomox or a good sampler... The sound is a bit too metallic for trip-hop and the break-beat possibilities have been used a thousand times. A TR808 sounds much better. This device has a very cold and synthetic sound, which can only be used today for minimal easy-techno-kitsch. As a summary, it's a great product if you want the '87 sound but it's no good if you want to create a new techno sound...

Toms sound awful and crash cymbals even worse... Once again, it's interesting with a distortion effect. External effects will help you discover its real potential.

I've been using it for 10 years for sentimental reasons rather than musical possibilities. Mine just broke and I will bring it to a service center again and again...

Its secondhand price increased a lot... It's almost overestimated considering it's not a rare collector's item and you can find it easily on the web. But don't forget it's already 30 years old and a 606 that starts having problems won't reach the end of the year. If you want to spend your money on it, test it before buying it.

Advise: I broke mine using a universal PSU so only use a Boss or Roland "authorized" PSU.

Think about it before buying one without a PSU.
Did you find this review helpful?yesno
»

Roland TR-606
1
Well I write this post especially to avoid having to make you ..
because ... I dream !!!!
Is still sold occas so expensive ..
ben see that it is the human dbilit ..

..franchement is pure snobisme..laiss fall ..
Finally, except those who collect old truc..inutile ..

do not pigeonner..enfin made here is my opinion ..

redox75's review (This content has been automatically translated from French)

Roland TR-606
4
I got the first two with separate outputs I share against SH 101 at the time.

the configuration is the most basic but ... EFFECTIVE ... like its big sisters 808 and 909.
My 8 year old boy playing with and surprises me with a pattern happens out ..

them are very typical and are suitable for a certain style of music, for the Hardcore is a mythical boxes to have in its set-up (LIZA N'Eliaz was mad / crazy); for electro dark ambient and also not bad.

I have since 1997, I use it much but when I spring it always makes me a trick his hyper Analog although dirty and improbable.
I almost entire collection of TR and each has something that makes it clings and that the guards.

Its look is great and leaves no indiferent with his cousin TB is a good mix but no more, we have to work the sound to re discover.
Now the price is abused has now, when I see € 400/600 and ... must say stop!
€ 200 max if very good condition and 250 € if separate outputs.

9 of 12 people found this review helpful

Everything is very clear, very simple.

Sounds are legendary, so TR. Little foot, but Charleys hyper metal and singing to perfection. Snare more or less following the punchy accent, as on all percussion sounds ... Anyway reduced to the minimum ("The minimum for the maximum"), but there needs nothing more ultimately, exept one Clap, can be ...

After going through the 808, the 909 and its clones, I got to the 606 which certainly sounds much more light than his two older sisters (especially the kick) but that is just as enjoyable to play and make touner coupled BAR with another account I do not separate myself before long. She has her character all its own on each sound. Perfect for any production Electro, Acid or Downtempo. Its main weakness is the lack of separate outputs. Otherwise, nothing is wrong. It can only appeal to all those who love the analog sound. Even the design is excellent!

Did you find this review helpful?yesno
»
Read the 8 user reviews on the Roland TR-606 »

Roland TR-606 manuals and other files