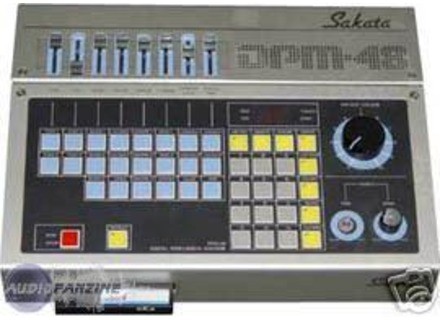 2 twelve o'clock connections in and out ....

There is a very difficult step sequencer handle 2 digit LCD.Je do not know the number of recordable songs or patterns on a cartridge RAM4 nikhon hammond operated with batteries ..

a somewhat complicated grip for sound simplicity of this machine ..
It is not possible to say the sound ..

no comment .... A touch pad without vlocit.
The sounds are realistic but sluggish ..
Sampler sounds are good and that's it ..

I sampl its sounds ds purchase, unable to adapt its functionality in my studio.J'utilise its sounds even now

What I like most about this machine is the volume control of each sound, spares outlets

This machine is forgetting to use are
Did you find this review helpful?yesno
»

Sakata DPM-48
5
Mine is a Hammond DPM-48 - Key Specifications:
-Quality construction (metal housing)
-Quality connectors (two stereo outputs, a headphone, 8 singles, 2 sycnchros DCB; I used an example to program the output trigger (gate) of the sequencer of my SCI Pro-One!
-Failure of connectivity: no MIDI (but the machine is midifiable)
Quality-of sounds: 22 sounds, drum sounds sampled in 'live' agreement with harmonic sounds of automatic feature combinations. Also 8 separate outputs (in addition to main stereo outputs and headphone output) allow separate processing sections.
Quality-programming: precise definition of tempo in real time on two wheels (general purpose), real-time programming (loop recording possible by adding successive layers) or step in grid mode, design patterns then songs by combining patterns
Default-main (but not for the time) that all (sounds and user programming: patterns and song) is stored on a casset RAM / EPROM with a backup battery. This fault current has the following consequences: it takes a stock EPROM cassettes with the machine (at least 3), change the batteries regularly tapes. A cassette can hold only three songs .. but it is possible to insert blank patterns in a song and using the pedal to loop over these patterns to white, allowing in a song to string together several pieces. for example I could put nine titles in a cassette. It is also possible midifier machine (Jean-Loup Dierstein - Paris)

Textbook perfect, natural programming (real time by successive layers + stepper mode grid section of instruments)
The rating is due to the dependence of EPROM cassettes for storage

The sounds come from a live and sampled drums agree harmonically automatically based on combinations
sounds Toms, Kick, Snares, Claps and Cymbal are excellent
A little reverb output is recommended
the sounds are stored on the tape and then eprom EPROM permettatient various sounds to change, that being said, I used the ones provided with the BAR without changing.
It's like having a battery, great sound but no ability to have multiple drum kits .. A group does not change its 'Sound' battery to each piece ..

At the time the sound of that BAR was a revelation to me. While all sounded BAR 'synthetic' LinnDrum9000 except the (expensive), it rang true, like a rock drum recorded Live. The ajot a little extra reverb sound great extent.

Sakata DPM-48 manuals and other files