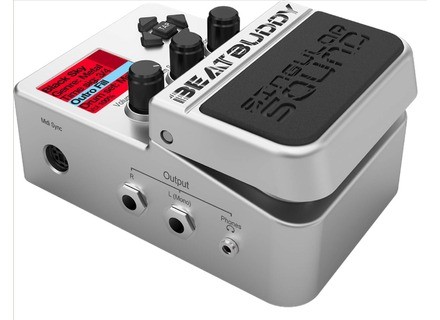 Singular Sound BeatBuddy
4
The BeatBuddy is a unique pedal on the market (mind you, a footcontrollable drummer

), and it’s very useful for guitar players (among others) wishing to evaluate in their arts of composing and improvisation technique.

I’ve now had the BB for 3 months, with a gap in the middle though as it failed me and had to be repaired. Yes, I was unlucky but since the support worked well I won’t reproach it to them. I believe to be part of a minority of persons who encountered problems with this tool. Just know that it may take some time depending on where you live, as you have to return it to the USA and the Chinese factory will then ship you a new one.

I won’t get into much details regarding the tech specs, you can get them at their official website.

As for its ease of use : VERY easy. You’ll have figured out you don’t have hundreds of possible moves with a foot and a single footswitch anyway. So you can easily launche the track’s intro followed by a verse, then get to the chorus, throw a fill in and gat to the outro – all this as and when you feel like it. It’s done fluently, and the sound is clear. A real pleasure!

I still have,’t used the app to make my own tracks (verse/chorus/so on). Hopefully this review will encourage people to do it.

Published on 12/11/15
Groove Monkee has updated two of its MIDI drum loops packs to include the BeatBuddy PBF format.

View the 8 files about the Singular Sound BeatBuddy »