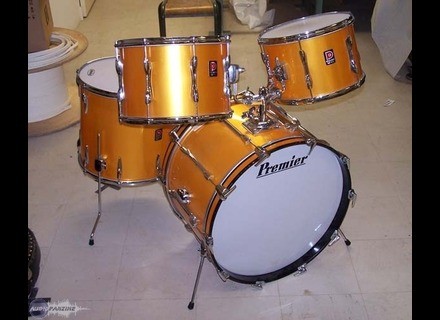 All user reviews for the Premier Résonator

annieviolette's review (This content has been automatically translated from French)" Versatile"

Premier Résonator
I used it since buying 92. I was looking for a slightly less fashionable. At that time everyone swore by tama or pearl. In one or another brand, I never found my happiness.
So I tried this model several hours allowing for the heavy and light and she answered every tyle brilliantly.
Then, I was charmed by its looks. First, it is white. Seven layers are applied with sanding between each coat. The interior is white and smooth. The Chrome is very simple, it looks like the cadillac.
What I like most is its punchy and heavy side at the same time. It marks the time superbly on the Led Zep slow and sings on Latin music.
It certainly sounds but we must learn to give, precision in sound does not support random.
The price was a little high but when you choose the instrument that is supposed to last, you have to pay.
It is a beautiful farm with superb finishes as we did more choice I would do if I started my career again as it has served me well.
Did you find this review helpful?yesno

yvanof06's review (This content has been automatically translated from French)

Premier Résonator
5
- How long have you use it?
- Four years or

- What is the particular feature you like best and least?
- Pros: - Its lgret for transport
- The rsonnance that carries the note without changing ft!
- The interlocking double Systm stamp Snare
- No vibration
- One's own! trs enjoyable in acoustic scne
- The feet have a hint of rust!
- The rodod not bougbr /> - Especially not mute add! she just sings

-Cons: - Lack of projection for the toms, it's against the plated ..
but hey, with microphones ..
- The CC emptement foot on the ground, a little Gnant
- Deformation due to clamping of the bar support toms at GC
- Tom 13 "vir ... ..

- Have you tried many other models before acqurir?
- Rogers, Tama, Yamaha, singerland, sonor .. beginners to low-end
beginners premium. in 24 years ...

- With the exprience, you do again this choice? ...
- It dpend just demand of the musical style ..
It is very well for pop, blues, jazz (somewhat)
Rock, with microphones on fts ..
The GC is quite impressive, and the CC, and Tom 12 "(my prfr)

It makes the studio scne and everyone loves it! drummer or not ..
Just know rgler its instrument ..
This is my first "First" and I trust him Fully!
So yes .. the same choice, if I stay in this range. thus a 9 / 10 because I have not yet tried to Gretch ...
Did you find this review helpful?yesno
Cookies help us improve performance, enhance user experience and deliver our services. By using our services, you agree to our use of cookies. Find out more.