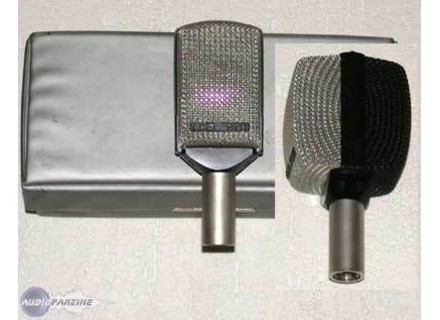 AKG D 12 E
5
Copy and paste of "fluctus"
"Dynamic microphone designed for bass instruments, but often used in singing (probably also for the look" vintage ".
It has long been the benchmark for the bass drum and bass amps, neck and neck with the Electro-Voice RE20, with 70 of the 60's. Electro-voice still continues to produce RE20, while AKG was replaced by the D112.
NB: Despite the relationship, do not assimilate with the D112's successor, to his "modernized" (at the time of its release ...) and more specialized bass drum.

Today they often prefer the Shure Beta 52 on stage, but they are still popular in the studio because their response curve is flatter, easier to work.

The bandwidth of the D12 is around 40Hz-16kHz. It's obviously very strong cash volume levels.
It can be used with excellent results on all major instruments (drum, bass, trombone ...) and all powerful instruments (snare drum, guitar amp). Is made to work close to the source, but it is not a reason to stick consistently to HP, unless one seeks an effect "loudness". "
Unlike the D12, the D12E has an XLR connector attached to its base, while the d12 has a screw in the base which allows it to attach a microphone stand without the need for forceps. The d12 has a cord coming out of his body and which is attached an XLR connector. I had both models and in practice, the D12e is easier to use.

Contrary to what Simon said Phillips, the famous drummer, there is no difference in sound between a D12 and a D12e. The mechanical and electrical components are exactly the same. I doubt very much that the slight difference in density the base of the microphone has any influence on the sound comes out. It can also refer to the words "Fluctus" on the D12 to understand what gives D12e.
I would just add that the D12e is an excellent auxiliary microphone in case you do not want to sound "trendy".