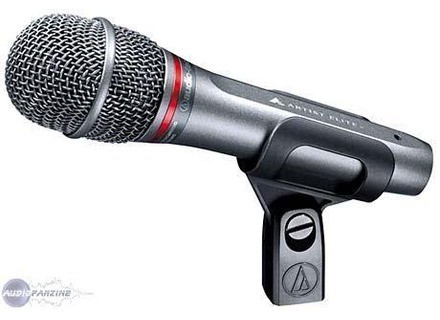 View all offers for Audio-Technica AE6100 »

Audio-Technica AE6100
4
The Audio-Technica AE6100 is a dynamic hypercardioid microphone that cost 170 USD. The Audio-Technica AE6100 will make your voice sound full and rich. The warmth of this microphone is what shocked me; I could not believe how good it made my voice sound. The best part of it is that it only picks up your voice and nothing else. If I were to talk in it, then stop talking you would hear nothing coming from the speakers even though there are a bunch of people around all talking. At first I was comparing this microphone to the Shure Beta 58 but after using it more and more I have come to the conclusion that it is better than the Shure Beta 58.

The frequency response is 60Hz-15 kHz and the impedance is 250 ohms. The Audio-Technica AE6100 is more of a live microphone but you could use it in a studio if you want to record with it. I have done some personal mixes for a CD that I put out using the Audio-Technica AE6100 for my voice over and it sounded great. Now that was just putting a voice over, so I am not sure how it would work if you are really recording some vocals and fitting it right into the mix of your song.

The value for the price of the Audio-Technica AE6100 is spot on. It cost exactly what it should cost, not too much. The built in pop filter, provides great protection against those popping sounds and it is very tough. The Audio-Technica AE6100 is made to be taken from place to place to use. It comes with a stand clamp (but not a stand). Right out of the box the microphone will feel good in your hand, it has a good weight to it and you can tell that it is made out of quality materials.

Audio-Technica AE6100
5
When I found myself with all the Audio-Technica Artist Elite microphones, I was dumbfounded at the sheer quality of these microphones. When it comes to stage mics, Audio-Technica isn't really a company that most people would take a second look at, but that's because everyone's too busy comparing every model to the legendary SM58.

Let's not get bogged down with numbers though. In my review of the AE4100, I talk about the simultaneous smoothness and sizzle of the AE4100. This microphone is a bit like that, but give it a bit more cut. Every microphone in the world claims to cut through the mix, but this one really does. Hence, my evaluation that this microphone is “angrier” than the AE4100. But it's not harsh. I hesitate to give it the general term “hotter” because the AE6100 seems to impart something beyond mere hotness.

The Audio-Technica AE6100, like its little brother, the AE4100, is at the top of its class. For live vocal performance, I would pick these dynamic microphones over any of the dynamic offerings from Sennheiser, Shure, Electro-Voice, everything. The only microphones that seem to equal or surpass it are the live handheld condensers, but there are times when I would pick this over a Neumann KMS 105. I'm not saying that the AT is better necessarily, but there are times when I wonder whether that vaunted KMS is really worth that price tag besides its looks. Not that the AE6100 isn't a looker itself. It's more than that though; it's one of the best vocal microphones in the world. Quote me on that one.
Did you find this review helpful?yesno
»

Audio-Technica AE6100
4
This dynamic vocal mic is a great studio/live mic. Though it's advertised as a handheld vocal mic, it has a variety of uses, including guitar cabinets.

I've only recently tried using this mic. I think that, though it sounds a lot like the cheaper Shure SM58, it's arguably a better purchase. The sound is generally richer than those competitors in the price range, and it definitely gives a more detailed response. I like the fact that it doesn't pick up bleed from surrounding sources that much, which makes it an ideal choice for a band who rehearses in close proximity spaces. While it does tend to be a little screechy in the higher registers, it's not quite as bad as some cheaper models (including the SM58). For some reason, the mic does pick up some bleed from behind it. Be careful if the vocalist is standing in front of an amp or drumset as you will probably get more bleed from an amp positioned behind the mic than from an amp on the side of the mic. I've also noticed that when put on a stand (as opposed to being held in the singer's hand), the response doesn't remain as consistent. This is partly due to most singers' inability to stay the same distance from the mic, but the difference is much more exaggerated in this mic than most.
That being the case, if you're going to put this mic on a stand, you'd have much better luck using it on a guitar cabinet. I've tried this and arguably liked the sound more than when I use it for vocals. I've tried it on snare drums, which I'd heard was a totally viable option, but I wasn't a huge fan of the sound.
Overall, I was pretty impressed with this mic. I think that for the price, it's worth it, but only if you already have a few Shure SM57s/SM58s, simply because those mics are more versatile and are definitely cheaper. I've also found that the SM58s control bleed a little bit better in loud live settings (which I unfortunately find myself in often, being in a bar band). I would probably make the same choice knowing what I know now, simply because I have found some good sounds with this mic. I wouldn't swear by it, by any means, but I wouldn't knock it either.
Did you find this review helpful?yesno
»