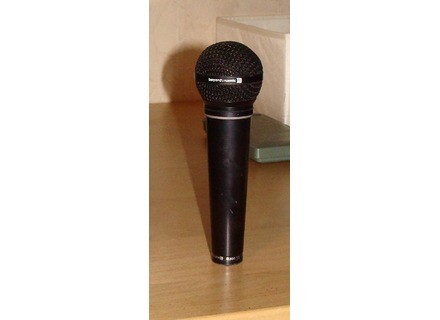 M 300 TG, Dynamic Microphone from Beyerdynamic in the M series.

Beyerdynamic M 300 TG
5
The BeyerDynamic M 300 TG is a moving coil dynamic microphone that has a cardioid polar pick up pattern.  The mic is designed to be used both in the recording studio and for live shows, but I've only used it inside of the studio so this review will focus on this application of the mic.  The mic also has a frequency response pick up between 50 Hz and 15 KHz.

I first used the BeyerDynamic M 300 TG about three years ago, although I haven't had access to one for a while since I no longer work at the recording studio that I used it at.  The M 300 has a variety of uses, but is best suited for recording male vocals in my opinion because it has the capability to handle high volumes and is perfect for capturing that rasp in a voice.  I'd recommend using it mostly for rock music vocals, but it definitely has some other uses as well.  I've also used it on electric guitar and have found this to be as good as of use for the mic as any.  However, the built in pop filter makes it seem like they designed it for vocals, which it is also great for.  While I haven't used it for any other applications beyond vocals and electric guitar, I would bet that it would sound good for any application where there was a good amount of pressure involved.  I haven't seen too many of these microphones around since the one that I have used, which is the reason that I haven't used the mic in a while, but I wish they were more readily available because the mic is really a good one.  It has a little bit more clarity than a Shure SM57, but at the same time definitely has a comparable sound to it.  I'm not really sure how much the M 300s usually go for since I don't see them around all that often, but would imagine they would be in the range of a few hundred USD.  I'd say that if you're looking for a nice dynamic microphone that this is worth looking into for sure, but there are plenty of more readily available options that are comparable if you can't get your hands on one.