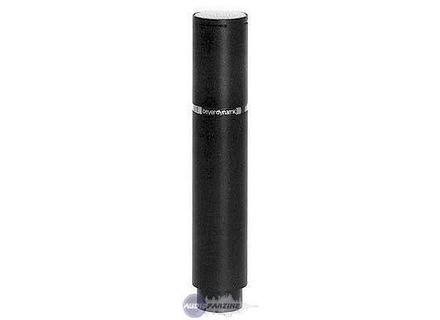 M 101, Dynamic Microphone from Beyerdynamic in the M series.

jctroyes's review (This content has been automatically translated from French)" A micro forgotten ..."

Beyerdynamic M 101
5
I am fortunate to have found a pair of Beyer Dynamic M101 CN first models (calibrated and tested by hand). I have version Broadcast with 3-pin DIN. These microphones are still used in very large studios worldwide, predominantly English and German.

Why is this mic he forgotten? It is a beautiful micro ... really!
It is very similar to old Neumann KM83. I read the previous opinion. I do not know if indeed there were problems conservation of certain models, but mine are just in perfect condition.

I know there's a difference between production and broadcast version with XLR version but I do not know how on technology.

Far from being a beginner, when I had these microphones in hand I realized that I had to do with the vintage. I returned to my studio and I was preparing a recording just for the afternoon.

The sound of an approaching enough Royer (from what I remember) in any case there is a natural feeling with the incredible top end no one put forward (unlike other reviews). The preamplifier must be solid here it was with the TG2 UA2192 converter. The pickups are very quiet and I have a better result than an example MD421 that I love.

There have been various series has seen so ...

blaez_minkoff's review (This content has been automatically translated from French)

Beyerdynamic M 101
3
Mine is a M101N (C)
I know very little about except that this microphone is a dynamic moving coil (that's the info).

I recovered free in August 2008.
The one I have seems quite old. What is certain is that he remained four or five years without any use which is not a good sign since a microwave (like HP) wears especially when not in use.

I tested it by taking his electric guitar. Frequencies ranging from 40Hz recorded at 10KHz with a big bump between 200 and 800Hz even far from the source. The rendering is mild with warm attack pleasing to the ear but a little deaf.
After tests on snare drum, it seems the cash under pressure.
Its tone is rather soft and warm owl on books or on a snare drum if we try to have a serious hit and mate with little resonance. Why I prefer it to an SM57.

There was the response curve in the box. It was almost flat from 40Hz to 15KHz. It appears to have thus lost as with age (especially in acute). Unfortunately I do not know the conditions under which it was stored.
The output level is quite low (lower than a comparison SM57).

In conclusion, this microphone seems to have been designed to take volumes. However it will be difficult to find a place in my park because I find it less interesting than a Sennheiser E604 that has more attack and bite.
For recording guitar (live, because I think nothing beats a static decision-studio) I find less interesting than a Beta57 or AKG D190 but better than a SM57.
For recording bass I find it less fun than a MD421.

j.frad's review (This content has been automatically translated from French)

For how long have you been using it?
1 year.

What thing do you like most/least about it?
It cash although he has a wide bandwidth (if it is tested on an electric guitar is foreseeable to have nothing above 10k because the speaker has simply), the fact that it is omni aplattit his curve response and gives it a very open sound, it prevents the use everywhere, but it is more natural than a M201. On percussion is really nice, if you add on top of a snare drum in addition to the usual AC open mics really sound, we might not be doing with voice. In short, not a killer but a good option to have on the elbow.

Did you try many other models before getting this one?
All classical dynamics found in the studios.

What is your opinion about the value for the price?
I have not yet found a sale, so I can not judge.

Knowing what you know now, would you make the same choice? ...
Some very nice pickups, if I find I'll try to have them.