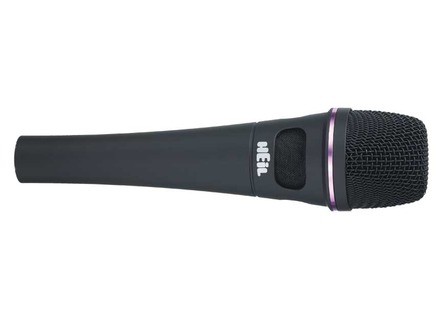 Connecticut's review (This content has been automatically translated from French)" A must!"

Heil Sound PR-35
5
Using "live" for voice.
It is a large-diaphragm dynamic microphone.

I use the Heil pr 35 for the first time after using long SM 58 and Beta 87.
It has a level higher than the oddly beta 87 which is fed "Phantom" exceptional output.
The voice is clear on all the spectrum with a bump in severe unpleasant at all.
During my concert, I went from jazz to pop to soul, he just received, it is impressive.
It is very robust, aesthetically nice.
I like the original, I'm thrilled because this mic is still little known in France. There will soon be a box, that's for sure!
I bought the biggest chance of falling on pictures of Stevie Wonder and Thom Yorke who used it. It was a gamble and I'm not disappointed.

balkam's review (This content has been automatically translated from French)" exceptional!"

three years to use the wonder that can be seen on a Stevie Wonder concert in London
after that you can put a lot of sen .... and shu ... the bucket! there's no picture, it really is another world, it's worth its price without problem!

jessy_c_dead's review (This content has been automatically translated from French)" Genial!"

Heil Sound PR-35
5
I chose on the advice of a AFien for singing, and I do not regret it!

It is therefore a dynamic cardoïde a broad membrane.

I have tried the-3dB but if they removed it might not be so useful that I do not know ...

For a long time I was looking for the "perfect micro rock'n'roll," I do not know if others could do the job better but it is already great!


It's been a few weeks since I use it now, before that I mainly use a Shure Beta58A and secondarily a Shure SM57, Sennheiser MD421 Sennheiser e840 and vintage.

In comparison, the SM57 was too acute, the Sennheiser e840 too nose, not enough fishing MD421 (But its really great except this point, which could perhaps be a good tench caught via console)
The Beta58A remained the best of them, well balanced, not too this or too much of it but it was missing something ...

At home it is connected to H24 practice and record on the fly, to save more seriously it gives very good results but I still a static Violet Design The Wedge, even more specialized for recording, and it means! (In home studio)

In rehearsal I sing a lot of fun in a good balance of frequencies with very little if not nothing.


The Heil PR-35've just fill that little "something extra", it has a presence, clarity and my voice is really worth just right!

It is against a chouille more difficult to master than the Beta58 as more sensitive. Flat in the position it get really tricky, because the proximity effect is present, but much more can know a little sound when playing the microphone.

With Low-Cut enclanché just a few days to get used to it, but it's worth the effort WIDELY!


Rated quality / price I do not really make account would have required that I know more micro and more expensive, which is not the case ...
In any case I did not get put through 300 Euros in! (In Audioware, which are great!)

It comes in a great little leather case with a clip Heil, a windshield and two discs, one black and one silver purple to eventually replace this original.


So with experience I would still have liked to have had a bunch of microphones available to try much of pickups, but with the information I have, yes I would do again this choice with your eyes closed!

I would have added a TC Helicon VoiceLive 2, and I really sound that I agree this is great!


I precise that even though a good ten years of music behind me singing happened relatively recently, about two years ago, so it has to take into consideration my opinion, I do not decline to a "real" singer and practical uses microphones in all situations for years and years ...