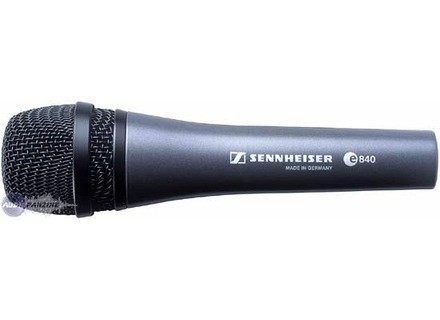 e 840, Dynamic Microphone from Sennheiser in the evolution 800 series.

The Sennheiser blows the sm58 away imo. Absolutely love this mic had it for 12 years.

I have a low to mid voice but its bass tones are great.

If youre starting out invest in one of these you wont regret it.

I use a sponge cover which doesnt affect the tone or volume
Did you find this review helpful?yesno
»

Sennheiser e 840
4
This is one of Sennheiser's many cardiod dynamic microphones. It is a wired mic with an on off switch. <br><br>

I am a gigging musician in a country rock band.

I bought this because I wanted to try something different than the industry standard Shure SM-58. A lot of my musician friends told me that Sennheiser was the way to go so I figured I would give this one a try. I picked it up on clearance for $40.

It is a dynamic mic when it comes to responsiveness. You can get some neat effects with slight changes to the angle you are singing into it. It is very clear and doesn't muffle the lows. The highs are chimy and it doesn't bring out the plosives as much as the 58 does.

It doesn't bring out the lows like the 58 does. This is a negative for me because my voice is high heavy and the low bump when you get into the mic is nice with the shure. This obviously isn't a negative if your voice is low heavy. It could be a little hotter.

The construction seems to be pretty strong, but I have already had some trouble with the finicky on off switch. I don't think you would want to drop it from any height.

It is a good mic, especially for someone that wants a good clarity and doesn't sing with many effects. I still prefer the Shure but this mic was a great buy at $40.

Plus: The package price (foot cable, microphone), the quality of its

The Witness: Nothing yet

Yes biensur I recorded the drums with and quite frankly c'tait
Did you find this review helpful?yesno
»

I like the sound clarity, finesse, and his look (I was completely seduced by this micro lol).

I had the one before that SkyTronic DM5000.Le sound is much less metal with more E840.De handling noise are mitigated with the E840.
I use them for evenings of entertainment and is nickel with the E840 (no feedback, exceptional quality, and robust first sight.

I do it again without hesitation that choice.
Did you find this review helpful?yesno
»
Read the 18 user reviews on the Sennheiser e 840 »