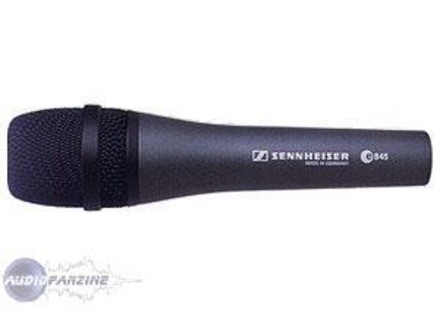 e 845, Dynamic Microphone from Sennheiser in the evolution 800 series.

View all offers for Sennheiser e 845 »

Sennheiser e 845
4
The Sennheiser E 845 is one of four Sennheiser microphones designed with live application in mind to go head to head with the venerable standards of the industry, the fabled Shure microphones. Sennheiser did not exactly craft four microphones to specifically take on each of the four Shures, but if I had to draw a comparison, I would put it right up against a Shure Beta 58A. Again, there is not a direct comparison possible, but it seems that Sennheiser is still attempting to snipe Shure off of their throne. Let us see how it compares.

The Sennheiser E 845 is a dynamic microphone designed specifically with vocal applications in mind. It has a supercardioid pattern to ensure superb off axis rejection, It is additionally, according to Sennheiser, and me, for that matter, pretty good at preventing feedback. It is not quite like the E 945, but the Sennheiser E 845 does rather well in this regard as well.

The Sennheiser E 845 has a frequency response from 40-16,000 Hz, a little more impressive in its range than the Shure standbys. It functions quite well for live use, but when recording, as noted by another review, a peak happens in the higher mids and may induce sibilance in some singers that get a hold of this microphone, because everyone is different, and a few singers have a scarily low lower threshold for their sibilance ranges.

The Shure E 845 is probably an upgrade from the Shures most people are used to using, but out of this range, this is the one I do not like. Stick with the base level E 835 or go big with the E 9x5's.

Sennheiser e 845
5
The mike came with a neat little pouch and its own head for a mike stand.

This mike has a very high out-put, with hardly any noise even when pushed quite hard. The sound is clear and warm and would suit live vocals well. In recording it works well but seems to enhance sibilance due to a peak in frequency response at around 5khz. It works quite well on acoustic guitars, yet its frequency response only goes as high as 16khz. A harmonic exciter lifts it nicely and sounds fine.

Just plug it in and away you go! The manual gives you a detailed map of the frequency response.

This is really a hardcore giging mike, I reckon it would take a good knocking around without giving up the ghost. Its feel and look is very solid. Its streamlined look and bullet grey metal body oozes quality!

After having long used a SM58, I pass on this microphone, for a thinner and less attachment to feedback. The sound is really thinner and prcis almost the sound of a condenser microphone. This "smooth" many voices: This gives the precision of listening because mdium a bit "mushy" are attnus - However the sound is suddenly not an neutrality great!

Many also dynamic and level lev output (the SM58 should be widely boost to achieve the same output level).

This microphone hangs a little less than a SM58 microphone feedback, but do not solves everything!

Since then I have given my 845 my bass player who has a voice with a little too much mdium and micro naturally corrects this problem.

I would do the same choice for my bass player because he had too much mdium. For me, I bought an E945 which suits me better (even if the E845 was already far better than a SM58 for me). See you soon in the opinion of the 945!
Did you find this review helpful?yesno
»

few years with many other references. From my point of view better than SM58 for two reasons:
- No it did not sound like the stuffy 58 and has a better definition in the high end (like the beta 58).
- It is much less sensitive to the instruments around repisse (ypercardio requires).
All that does not work in a 58 with a 845 and vice-versa.
I personally prefer this type of micro just more balanced, less expensive with a more modern sound.

Did you find this review helpful?yesno
»
Read the 8 user reviews on the Sennheiser e 845 »