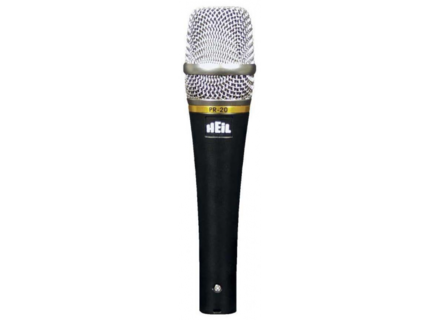 Heil Sound PR20
4
The Heil Sound PR20 is a hand held dynamic microphone designed for use either in the studio or for live shows.  I've used it mostly for live shows so I will mostly speak to that, but they do market the microphone as a studio microphone.  The mic usually comes with case, a clip, and a pop filter. and has a cardioid polar pick up pattern.

While they do present this microphone as a studio one, I don't have much experience with this microphone for that type of use, but what I can say is that the Heil Sound PR20 will sound good for live shows.  I've used these mics at a local venue a few times and was really impressed with the way that they sounded.  I used them only for vocals, but I don't see why you couldn't use it for other applications if you wanted to, but I do know that it will definitely sound good for vocals and since it is hand held it seems like they are trying to make it best suited for vocals.  The microphone is well built and doesn't seem cheap at all.  While the sound is pretty clear, I never expect hand held microphone to translate well into the studio, so while I am skeptical that it would sound good in the studio, I can't say so for sure.  I can be certain that the Heil Sound PR20 will work great for live shows, so even though it is a bit pricey if you are looking for a nice live vocal mic, this is a pretty good choice.  However, I would say that the Shure SM58 is a better deal as it sounds a bit better than this mic in my opinion and is cheaper.  However, some might like this better as this is just my opinion on the matter and I would encourage those interested to try them both out to see what will work best for them.

Heil Sound PR20
5
dedi dynamic microphone singing but can be used on almost any guitar, snare, vocals and more.

I've had it about 8 months, being put to sleep by the brand, my advice is impartial of course

)
Rather than spend several minutes explaining to you here to do the test .... it takes a PR20 sm 58 is connected both and bam, it's the sound you hear through the 58 to the trash .... basically I found the PR 20 a little below a BETA 87 A (I also) there is less open and less dynamic, but we do not speak the same price for one and for the another. I use it on vocals, guitar microphone in the second (the first being a PR30, the combination of the two is just unbelievable ... no problem of phase) and for the snare bottom (the top being a PR22, its great brother by reversing the phase on the PR20). microphone is basically what the Swiss Army knife in HEIL (before I used the Beta 57 to AC), micro costing almost nothing, especially for the result ....