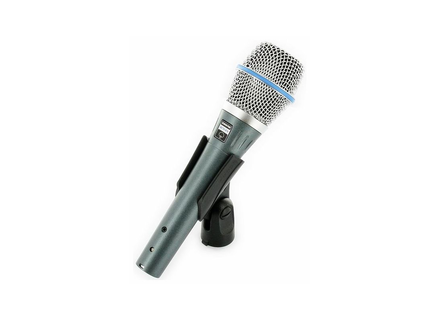 Beta 87A, Small diaphragm condenser microphone from Shure in the BETA series.

View all offers for Shure Beta 87A »

Shure Beta 87A
5
The Shure Beta 87A has been one of my favorite microphones that I have purchased in the last year. It has a very smooth response and clear sound. It comes with a pouch to carry the microphone in, and when I bought it , it came with a microphone stand too. The Shure Beta 87 A is one of the microphones that you will need to hear your voice through it in order to tell if it is for you or not. I really liked the way it made my voice as well as our main vocalist voice sound rich and full. My tone is a little lower than normal, it really took the bottom end of my voice and made it sound rich without overdoing it and making it to thick and muddy. You can use the Shure Beta 87A in a live setting or in a recording environment and it will sound great either way. The microphone is so versatile and can be used with a guitar backing as well as your vocals. It is a very complete microphone that is at a very respectable price.

The shure Beta 87A has a three phase pop filter that will almost complete take away all of your breath and pop sounds. I have dealt with may Shure Microphones over the last 25 years and I have never had the satisfaction that I have had with the Beta 87 A. It has completely blown me away, its warm and smooth. The value of this microphone is great and the price is low. There is nothing to think about, you will love the way that this microphone will project your voice in both a live and recording session. I first heard this microphone used by some local young kids who make Christian music. After talking to them about what equipment they used I knew that I had to have my hands on this microphone.

Shure Beta 87A
4
This mic has a good value for what you will get while using it. We have used this mic so many times over the last few years its crazy. We truly love the mic and have since the first time we ever used it. It is a great mic for a guitar player, mainly acoustic only. This mic is very similar to the Shure Beta 87 C.

I love the way this mic sounds and how it will really make the lower frequencies sound great on a male voice. With its ability to round out the lower end of the male vocals and still keep the mids in order plus keep the higher frequencies bright crisp and sharp. You really wont find many other mics that can perform like this Sure Beta 87A can and still be affordable. Similar mics will cost upwards of 500 dollars if you want them to sound as good as this one and want that great quality. But the Shure Beta 87A wont cost you that much at all that’s why it is a must have mic for your live and acoustic recordings.

This mic is by far one of the best mics that I have ever used and for what it cost it’s a no brainer you have to get this mic if you are in need of a great acoustic guitar mic that’s for acoustic and for vocals. This mic can still pick up some of the vocals coming from the sides of the mic as well. It wont be as clean though, but for a live situation its good to have a mic that can pick up some of the vocals coming from different parts of the mic as you wont be looking straight ahead the whole time. Great mic , Great price, buy it

Shure Beta 87A
5
I bought this mic at Guitar Center for $185. This is significantly less than they were selling it for ($250), but they were willing to match the price that I had found. Which was a really good deal... I decided on the Beta 87A after very extensive research - a lot of internet time sending e-mails, doing searches, reading up; a lot of phone time speaking to pro's, calling for prices, and comparing. And the Beta 87A seemed to stand above all the others. So I went to Guitar Center, tried it out, compared it, and was sold...

I like everything about this unit! The sound, in particular. This microphone is a condenser and in being such is supposedly more sensitive and fragile. But Shure dispels that theory with this mic. They have put a studio quality condenser microphone in a rugged, live performance package. Believe it or not, this "sensitive and fragile" microphone has survived the famed Shure Drop Test. This condenser mic is as rugged a mic as the old SM58's. It's crystal clear and so natural. My voice comes across so smoothly ans sounds so...real! Due to its supercardioid design and its significant gain before feedback, this mic has completely eliminated the age-old problem of feedback. It's just an amazing microphone and I love it!

Believe it or not, I have tried to be critical about this microphone, but am at a serious loss for complaints! I can't find any faults in this mic! It is just completely satisfactory and I could not be happier. I would definitely buy one of these (since I did...).

Rock-solid. Being a Shure, I expected that, but I was still surprised by the heft of this mic. Again, it's withstood the renowned Shure Drop Test and is as rugged as any other Shure product. I recently read in a forum about how a guy took his old SM58, ran it over with his truck, plugged it in, and sang. he said it worked same as before he ran it over. I would expect the same durability from the Beta 87A.

Quite honestly and in my opinion, this is the very best live performance microphone that money can buy. It's a condenser, it's studio quality, it's a Shure. What more could you want. I love it. It really brings the best out in my voice and I know that it would not disappoint you either. If you're looking for top-notch quality that will outlast you, this is the mic! Go for it!

Shure Beta 87A
5
To me, Shure's Beta microphones, especially the companies condensers, like this microphone I am reviewing right now, have always stood in a strange place to me. Call me a quintessential slave to marketing, but I never even thought about the Beta handheld live condensers from Shure for more than the most transient of moments, but when someone actually shoved one into my hands, it took me a bit of time for the gears in my mind to click and remember that these exist.

That sounds awful, but considering that we hear loads about the SM58 then loads about the KSM9 make all of these middle microphones a little odd to think about. At any rate:

The Shure Beta 87A is a handheld electret condenser microphone designed specifically for live vocals on a stage. The Beta 87A has a nicely chosen supercardioid pattern, so as to tighten up the pickup for "on axis" sound more than cardioid is truly capable of without causing some bizarre frequency artifacts. The 87A has a frequency response from 50Hz all the way to the 20,000 Hz that we all enjoy. It has an impressively high SPL of over 140 dB. In terms of specifications, I find that the self noise and signal to noise ratio numbers to be poor, however in live usage this should never be an issue. It is, however, important to note, because if you are looking for a microphone to use both on stage and in a studio, this is not the microphone.

In use, I have found that the Beta 87A imparts a warm tone, especially when the proximity effect is worked strategically, while the microphone retains a very pleasant sizzle. It would probably work well for loud music, but for more intimate things, there seem to be few microphones that can bridge the gap in this application between the Beta 87A and the vaunted KMS 104/105 microphones from Neumann.

The Shure Beta 87A is a fantastic live microphone that will flatter the voice in a very unique way. Give the microphone a shot before you commit, however, because there is a clearly apparent "won't work on everything" vibe the sound gives off. Make sure you listen to samples, and if possible, try them out!

Did you find this review helpful?yesno
»
Read the 22 user reviews on the Shure Beta 87A »

Shure Beta 87A manuals and other files