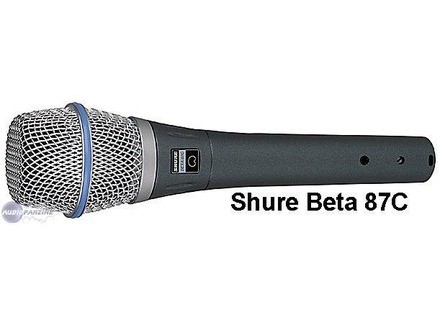 Beta 87C, Electret Microphone from Shure in the BETA series.

Shure Beta 87C
5
I bought this as a recording mic, and it is now my main LIVE vocal condenser mic.

I went for years perfectly satisfied with my old Shure SM-58 Mic. It went where I went and it fairy faithfully reproduced my vocals, such as they are. That’s all you really need a Mic to do right?

I ran across one of these at a local music store and was looking for a condenser Mic for acoustic guitar and so I picked it up.

I was quite happy with the job it did on the acoustics and that was as far as I was planning on it going. Then one day I got a call to come and help a band out on an emergency situation where the bass player was deathly sick and they needed a fill in on bass and backing vocals. The problem here was my trusty old 58 was in the band trailer about a hundred miles away. So I winged it and grabbed the Beta 87 and headed to the gig.

I was absolutely floored by the difference it made in even my vocals. There was plenty of air and headroom and my vocals cut right through the cruddy mix at the dank little club.

I have been using the Beat ever since that day in all my live shows on my vocals. Let me also add here I have a LOW voice and I can usually distort the heck out of a Mic. As of yet, I have not had that problem with this Mic.

The only issues I have are that the shaft is smaller than a regular Mic and so you need the special stand holder for it and the casing is partially made of some form of plastic and has developed some cracks which are going to necessitate my sending it back to Shure to have the case re-done.

But given the sound and service it has given me, I think it is worth the added cost of that and maybe even adding a second one as a back-up.
Did you find this review helpful?yesno
»

acromontagne's review (This content has been automatically translated from French)

I for one year.
Much more heat than the grain and SM58. At least for the whispered voice, it's huge. I also find it much better than the cash 58, no need too do the yoyo at the microphone, depending on whether I sing loudly or softly.
For a static, there is too much pb feedback. I come every time to have a correct level in return. By cutting around 400 Hz and 4 KHz.
I tried that once her little brother 87A (UHF) and I had a lot more hassle in return.
It is three times more than the 58 but it certainly gives me 10 times in terms of comfort.
There is still much cheaper than its competitor at Neumann.
Be careful though apparently this microphone is not suitable for all types of voice.
A great purchase! For me, this microphone has become indispensable. Now I am looking for a good compressor - pre amp to associate
Did you find this review helpful?yesno
»

moncalme's review (This content has been automatically translated from French)

I have been using PRS 3 years, nothing to do with a dynamic microphone, the sound is not that is the voice is warm and well cash the Feedback trs are rare, a brief voice-over-sc no CD quality, ideal for concerts "unplugged", Pb: Beware of cables, a cable of poor quality can all gcher!
It is worth its price, it is lightweight but fragile, the cover is a bit shabby considering the price, but good.
A deprecated the rockers excited!