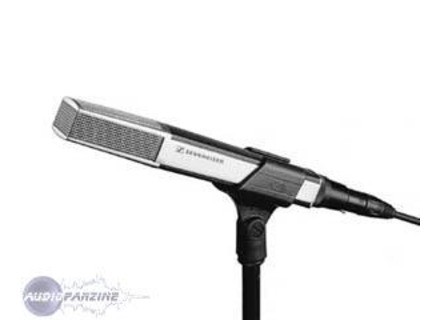 MD 441, Dynamic Microphone from Sennheiser in the MD 441 series.

Published on 04/02/13
Here is a selection of 8 dynamic mics for recording drums, guitars, voice and any other instrument.

Sennheiser MD 441
5
The Sennheiser MD 441 is a dynamic microphone that I have experience with in the recording studio. It is in the same vein as the classic MD 421, although it doesn't share the same sound and the 441 seems to be a bit more versatile. I don't know if this would sound good for live shows, but I stray away from using it on the stage since it isn't very cheap and isn't exactly designed for this sort of use. The mic has a super cardioid polar pick up pattern, so it is great for aiming it directly at something without picking up too much sound around it. Like the MD 421, the MD 441 also has a five point bass roll off switch, with the letters "S" and "M" on each of the sides, standing for "music" or "speech." It also has a treble boost on it as well. While the mic feels pretty light, it is quite sturdily built.

I've only had the chance to use the Sennheiser MD 441 in a few different scenarios, but many engineers that I have talked to speak very highly about this microphone in terms of it's versatility. The applications that I have used it for are for both the top and the bottom of a snare drum. Mostly, I used it on the bottom with a Shure SM57 on the top, but also experimented with using the 441 on the top as well. I found that it worked quite well for both applications, but in the end I did like the sound of the SM57 on the top of the snare best and found that the MD 441 was best suited for the bottom. I haven't yet had a chance to try the MD 441 on other drums like tom toms, but would think it would be good for them as well, as is the case with the MD 421s. If you own or have access to a Sennheiser MD 441, I definitely recommend trying it on all sorts of applications to see what will work best for it, which is something I plan on doing as soon as I am able as I believe it will sound great for most applications. The MD 441 is definitley not as readily available as the MD 421, but you can find them around. They will however cost a good amount more. All in all the Sennheiser MD 441 is a very high quality dynamic microphone that should be treated as so.

floty's review (This content has been automatically translated from French)" A reference microphone ..."

Sennheiser MD 441
5
This super cardioid dynamic microphone is the mythical micro television in the 70s is very versatile. Instruments, vocals ...

I discovered for the first time, 10 years ago on a TV tray (sax solo 1'42 to 2'22) and I have never found better since for the sax, not even a Valvet Brauner, Neumann TLM103, AKG C414, Shure SM57, Sennheiser MD421 ...
Bought there one month for the studio, I gradually discovered its versatility.
Sax becomes soft at the top of the spectrum without aggression, round and warm in the bass. Also great on the voice. Tested with and without "Universal Audio 6176" and "XLogic SSL Alpha Channel".
For the price we flirt with the high end, but worth the cost.
I would buy a second willingly.

MdK's review (This content has been automatically translated from French)

Micro celebrity puique classic Maritie emissions and Gilbert Carpentier, as long as he followed Frank Zappa on stage.
I sang in it by repeating 'and on stage (I sing hiphop-metal) and frankly, I really enjoyed myself (no handling noise).
I recorded the guitars (also metal) with the microphone in the nose bowl and I really enjoyed myself too.
It is a microphone that responds to the investment lot (you can really play) and has a really good return.
I have not had the opportunity to compare with others of the same class, but I think he tears still good!

snafu's review (This content has been automatically translated from French)

One wonders why this is so micro rpandu, I feel that being said it is more rpandu in the north. It's really a micro exciting. I used a voice on a BMD, is fantastic for your exact a dynamic, almost no eq, the rve. It is a microphone that cash is still quite well and end of the spectrum. Its most common use: the brass. I think it really can be more versatile.

Pb: If you break the clip, you're not in trouble ... same concern with the 421, in fact, Sennheiser shit the world on this one-l.

Sennheiser MD 441 manuals and other files