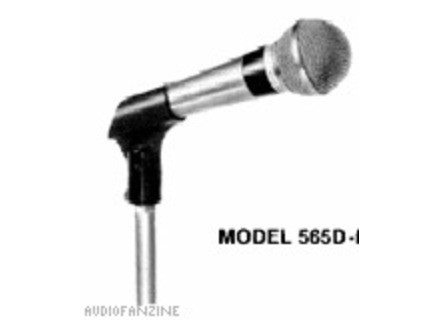 Shure 565
4
The Shure 565 is a dynamic microphone that is no longer made by Shure.  It is suitable for both recording and for the stage, and I've used this microphone is both capacities.  However, I'd say that while it can be used in the studio, it is probably best suited as a live vocal microphone.  The microphone also has an on/off switch which makes it seem better for live shows.

I first used the Shure 565 about two or three years ago after getting one from a friend and immediately started using it for live shows.  The mic looks like a Shure SM 58 but doesn't have as good of a sound and isn't as sturdy in my opinion.  While it does have a pretty good sound, the microphone just doesn't have as good of a feel and when compared to the SM 58 I feel like I could break the 565 a lot easier.  The Shure 565 is a vintage mic but they now also make a 565D that is a copy of this microphone, which in my opinion is built a bit better than this vintage version.  In terms of sound quality, the Shure 565 will definitely get the job done for vocals for gigs.  It has a pretty good overall sound and would work on pretty much anything if you wanted to try it out on other instruments.  In terms of recording, I wouldn't use this microphone all that much because even though it works fine for live shows, it lacks a certain clarity that I look for in a recording microphone.  Don't get me wrong, for home studio demos and things like that the mic will work fine, but beyond this I wouldn't use it for anything related to recording.  While I do like using this mic for shows, if I hadn't stumbled upon one I would probably just have bought another Shure SM 58 because they last forever and have a better sound.  This being said, the Shure 565 is a good mic in its own right and works well for shows.