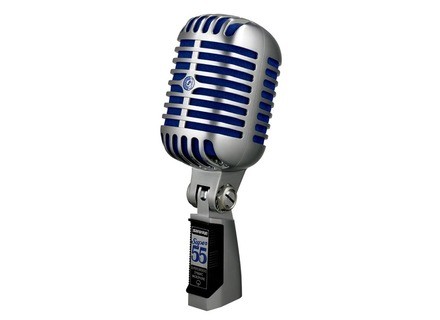 Shure Super 55 Deluxe
4
This microphone is made by Shure, it is a dynamic vocal microphone that has a classic look to it. It has a supercardioid polar pattern and a great frequency response for speeches or vocals. The presentation value of this microphone is why it sells though. If you put this microphone on a stand and put it on stage it will look amazing and your audience will notice is. It comes with a swivel stand mount too. It does not have an on and off switch which would be a huge plus so that it could be turned off when not being used. We like to keep our mics on stage during our whole set mainly because we do not have a stage crew to switch things in and out so for that reason we cannot use this microphone some times because we do not want to go through the process of removing it from stage. Sometimes we use this microphone toward the end of our set so we will not have to remove it and can finish with it.

The sound quality of this microphone is truly amazing, I have not heard many Shure mics in a live setting that can sound like this one can and still look this great. You can use this in a studio too and be just as happy with it as you will be on stage.
The Shure Super 55 Deluxe does a great job with handling feedback and getting rid of external noise too. This mic is not for anything other than vocals and if you try to record an instrument with it you will be let down. Let this microphone be your on stage vocal mic as long as it not having an off or on switch effects your set up. I do hope they come out with another version with an on and off switch on it.

Shure Super 55 Deluxe
3
The Super 55 Deluxe is made to look vintage, but it is a pretty standard vocal microphone otherwise. Do not be fooled by the look of this microphone. It does look cool and has a vintage style to it, but the sound is nothing to brag about. It is an average microphone at best.

The Super 55 Deluxe is made by Shure and it has a supercardioid polar pattern with rugged design to last you a long time. You will not experience much feedback with this microphone either. I have not used this microphone that much, but in the time that I have used it I did not like it. The quality is decent but it lacks some higher frequencies. When we recorded with this microphone we would have to go in the mix and boost up some of the higher end frequencies with the vocals recorded on the Super 55 Deluxe. The mids and lows are pretty warm and well rounded but it was definitely lacking some high end.
This microphone comes with a storage bag and carrying case. It has a very clean design to it and it does look great in a smaller or home studio. The precision and quality of sound is not worth the buy to me, it lacks some serious brightness for vocals and will require a lot of EQ boosting. This microphone looks cool but the sound did not work for me so it got returned pretty quickly. I have used just about every Shure microphone that is out, and some of them are really good. But this one was a flop from Shure, also there is not on or off switch on the microphone which would have been nice to have so it would not have to just stay on all time time. I would not make this choice again if I could go back and pick a new microphone all over.

For one, the Shure Super 55 is supercardioid, and has a wider frequency response than the 55SH Series II. It has a nice respectable frequency response of 60-17,000 Hz, and I usually never mention this, because all vocals microphones seem to have this claim: tailored for voice. Well, this one is pretty nice, let me just say. The microphone seems to give off a very interesting character that is flattering to the voice in a very subtly vintage way. What this generally entails is that this microphone is designed very nicely to accommodate more character driven music, more grit and raw power and performance than the overproduced vanilla sound that you generally hear nowadays.

This means that I would never record a contemporary pop artist on this, although for R&B, Blues, good ol' rock and roll, and perhaps some rap, this would be ideal. The Super 55 seems to hit its market perfectly. and it does so while looking incredibly attractive. There's also a special edition of this microphone that is in black and red instead of silver and blue.

And before you ask, this microphone does possess impressive technical attributes, such as superb resistance to feedback and superb off axis rejection. It's no SM7b in that regard, but it's still pretty impressive.

And finally, there isn't an on/off switch. While some people may see this as a disadvantage, I find switches to be rather silly looking, and personally, I do get a tad bit paranoid with them.

It may not be the most frugal purchase in the world, because you can find good sound for less, but considering its appearance alone, the Shure Super 55 is a contender. Engineers are the people most aware of the visual element in music today, but often, they will shun a microphone like this just because of this. Thank goodness that the Super 55 has its own nice character to make it more than a cheaper microphone with bling!

attention to the output level is not exeptional (less powerful than a Peavy ft) but the signal that comes out is perfect so you have to have a good sound system to get the max.
Say the sound that comes out is quality, not quantity where the need for a sound that deserves such a microphone!
I have a personal cabinet msr 450 V2 Mackie mixer with preamp.
The sound is crystalline, almost no feedback even with the sound pressure DNAS red.
Itis very heavy so you have a foot with base