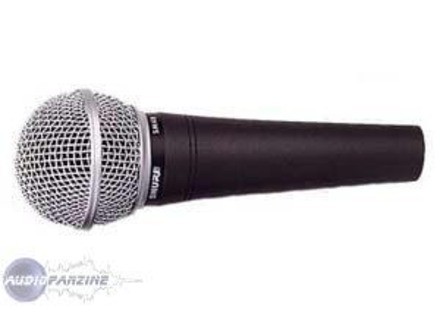 View all offers for Shure SM48 »

jarvis_steven's review"One of my favorite microphones. But it isn't for everyone."

Shure SM48
5
The SM48 is a dynamic microphone with a cardioid polar pattern and a frequency response ranging from 70 to 15,000 Hz. Supposedly, it is best suited for backing vocals or spoken word. The frequency response(in comparison with other microphones) does tend to support the claim.

I have found myself in many situations in which a more specific response like the one that this microphone provides, is actually much more desired. If you are in a particular room that is more susceptible to bad low end background noise, for example.

Being a home studio owner, and one that has gone from nothing but a handheld tape recorder to a fully functional, almost completely analog studio(I still prefer burning CD's! Sorry!), I have found uses for microphones that range all over the spectrum. This one in particular for the times in which I am stuck in a less than desirable room.

Even before any real knowledge of audio or sound waves or frequencies had been gained, I found myself with this microphone being my personal first pick for live settings. Again, something about where the frequency range sits, really tends to fit my ears.

I can't find much to dislike about it. It can take a beating. It sounds great. It is reliable. Most Shure microphones are exactly the same. Reliable and rugged. I love it. The biggest con(if you could call it one) is of course it's particular frequency response and the possibility of being disappointed with it. If you want a delicious and colorful full range to be perfectly captured, it shouldn't be the first pick.

The pros, however, include the incredible price point. I'd buy these in bulk if I could. They are cheap, and survive everything that is thrown at them. The range is perfect for my voice. It isn't great for everyone's, but neither is my voice.

I suppose that I view microphones as instruments. And, as such, each has it's own personality.

Shure SM48
4
The sM48 is a Vocal Microphone that is very affordable. This is the mic that most people can get almost anywhere and it became a household mic that everyone loves. It will give you great recording quality no matter what your personal set up is. Unless your recording in a room with no acoustics (furniture, etc..) then this mic will do the job great for you and without spending a fortune.

It has a great frequency response especially for the ranging lead vocals that most cheaper mic struggle to pick up a clean sound with. With the SM 48 you wont have cut off much of the low or high end frequencies with mixing. Maybe just a little bit just to clean it up in the overall mix before you master. But it will give you warm rich vocals. Even with backing vocals and harmonies, it will provide a great warm natural sound.

The SM48 comes with a shock mounted cartridge and a built in pop filter. So if you are standing at a good distance from it you wont need to purchase an external pop filter. Just get a good stand and you can start recording full great songs right from home. Not demo rough drafts, im talking the full songs!

Overall, great mic and its very rugged and can take a beaten like most shure mics can. There is just something about shure mics that we all love. it’s the quality and price that is unbeatable. The Shure SM 48 is a standard mic for all at home recording artist. Make this your first mic, it will build the foundation for your great recordings especially if you are good at mixing and mastering then you will need a mic that provides great quality from the jump! You definitely want to purchase this mic, its tailored for vocals and its almost like they made it for the people that are on a budget and record at home. Thumbs up to shure!

Shure SM48
4
I've always known the Shure SM 48 was great, and have often used it for drums and guitar. But today I was in a session and the ONLY condenser I had brought started doing some goofy things. So I busted out a good old Shure 48, and recorded all the vocals, harmonies, and guitars with it. And it here is the kicker... it sounded Great. Not just good, but it blew me away. It DID take work though. For use on vocals you really have to crank up your upper mids (3k or so) to clean it up, roll off some lows, and maybe add a dash around 100Hz for some extra body. I used it through an LA-610... for money, it doesn't get any better than that. Don't buy into all the imitations out there. there are some good mics, but this is a workhorse.

A person could record a whole album with just SM48’s and it would sound pretty good. Anyway, if you're just starting out, buy this mic, its great for a beginner just getting into recording. It is far better than a condenser if you are working in an untreated space because it has a tight cardioid pattern that rejects most room noise and other problems. If you have a cheap preamp and are having trouble getting enough gain to this mic (or even if you're not), buy a Cloudlifter by Cloud Microphones, it uses phantom power to generate up to 25 db of super clean FET pre-preamplification...that gives any old dynamic or ribbon mics low noise and high gain and interfaces them perfectly with modern recording systems. If you're thinking (just as I was a week ago) that this mic is far too common and old to sound as good as some people say. Its pretty cheap as well, so its worth the buy and even if you don’t like it most stores will allow you to return it within 30 days.
Did you find this review helpful?yesno
»

Shure SM48
5
The Shure SM48 is, predictably, the SM58's younger brother. I, however, resent this claim slightly. Sure, Shure's nomenclature and pricing would have any person who is not well read up on microphones believe that the Shure SM58 is simply a better version of the SM48, and I suppose in some ways, that's true. In others, it simply is not. I am going to go into the specifics of this very soon.

What makes the SM48 interesting, however, is that on a certain voice (read: my voice), it cal kill the SM58. While the SM58 is a world standard for live singers, we should also remember that singers over the past few decades have gotten more wild and unpredictable, and the general trend is that singers tend to get more edgy. The Shure SM58 smooths that out very nicely.

The Shure SM48 will not. I will never give some heavy rock vocalist an SM48 because it will kill the ears of everyone around. This is because the Shure SM48 lacks a n impedance matching transformer. This makes the SM48 more quiet than the Shure SM58, which is already quite a quiet microphone, but the results are very nice, the midrange honk is gone, and it is replaced with very nicely placed emphasis in the high end, and has less of a proximity effect.

So unless you have a richer voice, which I do, at least compared to most singers out there with an SM58, the SM48 will actually work better, and this difference in the frequency curve actually would make it usable for studio recordings if it had to be!

I resent Shure's bid to put the SM48 under the SM58, although it is true that the 58 is more versatile. However, if you're like me, and sick of the obnoxious honk that the SM58 emits, this is a great choice for half the price!
Did you find this review helpful?yesno
»
Read the 8 user reviews on the Shure SM48 »

Shure SM48 manuals and other files