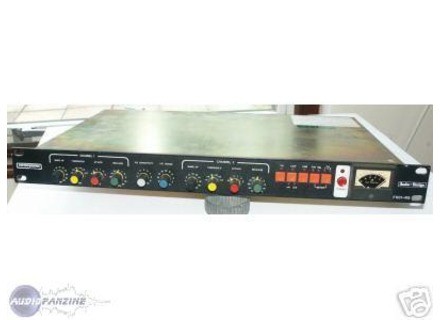 Adr (audio Design & Recording) F601-RS
5
The ADR (Audio & Design) F601-RS is a dual channel limiter for use in the studio. I've only used this a few times, but it's definitely a cool piece of gear. I don't know the connections that it has because the one I used was already hooked up to a patch bay and we did the patching via that. It is rack mountable and will only take up a single space.

Each of the two channels on the ADR F601-RS has the same parameters. These include knobs for gain make up, threshold, attack, and release. It also has general sensitivity and range parameters. I haven't checked out the manual and I think it would be really hard to find one for this anyway.

I've really been digging the sound of the ADR F601-RS the handful of times that I've used it. It's not best for brick wall limiting, but excels for use somewhere between this and compression. You can hit your signal pretty hard with this, but I've used it more subtly for use on drums and other high level applications. It's really easy to manipulate as it has standard parameters that any experienced engineer will recognize. I haven't used it for stereo mixing purposes, but it would work for this as well...

The Audio Design & Recording (ADR) F601-RS is a pretty rare stereo limiter and is one that will be effective for uses of all types. You're most likely going to have a hard time getting your hands on one since it doesn't seem like too many of them were made. Because of this I'm not really sure what kind of price this would command either. Either way, the F601-RS is a nice little limiter and definitely suitable in professional studios if you can find one and get your hands on it.