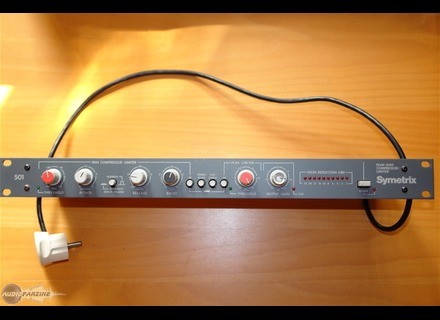 Symetrix 501
5
The Symetrix 501 is a two in one peak/RMS compressor/limiter designed for use in the studio. It’s a unique dynamic processor in that it’s got one channel with two different types of processors on it. The first processor is an RMS compressor/limiter, while the second one is a peak limiter. It’s got XLR connections for both your input and output, as well as ¼” connections for side chaining and for stereo linking. It is cased in a single space rack mountable casing.

Using the Symetrix 501 didn’t take too long for me to figure out even though it’s definitely a unique piece of gear. The RMS compressor/limiter is the more traditional dynamics processor of the two, consisting of parameters for threshold, attack, release, and ratio. You can use the attack and release either manually, or you can set it to automatic mode with the button provided for this. The peak limiter has controls for threshold and output gain, along with an LED meter showing gain reduction. Each of the two processors also has bypass buttons, and there are buttons in between the two of them for both sidechaining and for using this in stereo with another one of these. The manual is put together very well and is in depth, although most of it you could figure out for yourself.

The sound quality of the Symetrix 501 is definitely impressive to me. I like both of the processors on here a great deal, as I feel they both have their own usefulness in different situations. I’ve found myself mostly using the RMS compressor/limiter, but the peak limiter definitely comes in handy and could especially be useful for mastering if you had two of these to link together in stereo fashion. Both of the processors do have a similar type of sound to them, which is clean and vibrant across the board. The 501 is in general perfect for mixing…

I’m a big fan of the Symetrix 501 for a number of reasons. The main reason is it’s overall sound quality, followed closely by it’s versatility. Having two processors on the 501 is a huge plus and makes it unlike most of the compressor/limiters out there. I’ve only used the 501 for mixing purposes, but if you had two of these and were to link them together, you could certainly use it for mastering. The price is more than reasonable for the 501, so if you’re at all interested I would do yourself a favor and pick one up!