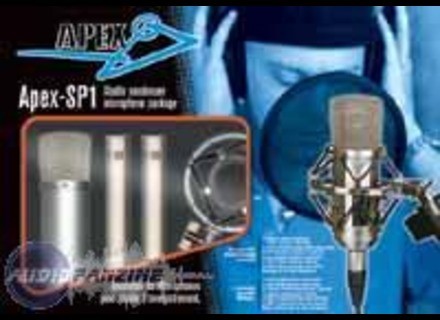 mikzic's review (This content has been automatically translated from French)

I ordered over the Internet in August last on the advice of a seller who practiced in the home studio. I use it regularly for the sound of live or home studio. Live with a good equalizer, there is no problem of feedback. the sound is loud and clear. I use the sound to an apex 180 for choir and it works tiptop. Means everyone just to position the microphones.

for the price, what can one want better: may be a better finish and yet we do not care.
The resulting sound is unexpected given the price paid!

excellent, there are no other words

Absolutely and this is done: I bought another kit after two months and yet I am completely satisfied.
Did you find this review helpful?yesno
»

An Apex 435, electrostatic microphone off diagram

A windscreen for the 435

An omni capsule and an ultra-cardioid microphone for the 180

For me, it's original application for a battery (in my kit complment Stagg DMS-5700) I bought this pack of microphones. The Apex 435 is intended for the snare drum played with the jazzy bagettes-broom (because with hard sticks, it's better to use the clbre Shure SM-57) and two Apex 180 plutt as overheads (space both Stagg CM-5050HO delivered with the kit are cardiod Stagg cymbals for so plutt or charley). But they can also be used for other applications, mainly for string instruments, wind and hearts that require a lot of subtleties of reproduction.

The 435 is a driver of the popular Apex 430: same and even electronic capsule body but Different. It can be used also for the voice studio. It gives a clear and natural voice, is destiny plutt to speak (radio animation for example), for voice or the song fminines Franaise (indeed, the language Franaise uses the spectrum more highs than English that is more in mdiums) otherwise the acute attack the ears too. But singing in the studio, I prefer my Joemeek JM47 prfre which is equilibrated in mdiums and that is the mediums that matter, especially for English songs, so for the pop - rock - r'n'be - etc.

It possde even a switch that sets off or an effective high pass trs. But now it is inside the microphone. It should therefore be able to disassemble the drive. Well, as the body of the microphone is relatively small (just enough to fit in its shockmount ^ ^) I guess the designers had no choice. And to be able to make ECONOMY manufacturing costs so they can offer this price drisoire (about 230 CHF - approx. 145 euros only! ^ ^), They have to SAVE up to Contents Premire. Notament. It is simpler and more security Inrush of the high pass of the mixer (most of them have a high-pass button, even small ones).

Both come with two 180 capsules Each one: to make an omnidirectional and the other to make hypercardiodes. Hypercardiodes so that I wondered if by chance there is not an option between two troixime capsule but it seems not. They simply screw on the body of the microphone. But be careful, the end is extremely filtage: do not use force when screwing on pain of abmer of Manir irreversible. If you do not "of his fingers," you better time to ask the store that you change.

I also feel that they were wrong in the user manual supplied with (English only), in respect of these capsules. Indeed, the boards I tried with both and it plutt the opposite ceului with bars in front of the grid is plutt omni and the other with the golden ring and mesh extremely plutt end is cardio. In addition, the sound changes radically between the two Manir capsules: cardioid the starved bass. Unless he or capture only in terms of his strait-making ... In addition, the 180, regardless of the capsule using (but mostly with omnis), trs are sensitive to the slightest gust of wind. The Bonnette anti-vent with books are highly critical and a lot ffective for Bonette I tonn.

Also, be careful to tighten the screws, butterfly-axis three shockmount because the quality is not great, they do not shake great.

Drisoire for a really, so I have the hands of good quality microphones that compltent absolutely Kit Stagg DMS-5700. Besides just not super terrible finisher and a strong smell of nine mtal dballage at first but hey, just let the air two or three days ... And again, I wonder if the smell does not come from the black foam in the box. Cher I store them in pockets with other microphones. But it is not important, the bottom line is that it works and it works well ^ ^ plutt

It's a shame no longer REPRESENTATIVES Apex here in Switzerland (mid-March 2007). Because of a, d I order my pack in the backing so abroad.
Did you find this review helpful?yesno
»

raywan's review (This content has been automatically translated from French)

Apex Electronics SP1
5
Super Micro! really! I used to use guitars in front of the amp has 5cm of the grid, careful though it is very directional (not necessarily more than others!) but the investment proves to be very important to have an ample well.
the use of a nice little pre-amp only makes the sound a little warmer, but it is not absolutely necesaire

I use it for a year, at value for money is a must, though I used a lot of AKG, Neuman AudioTecknica or (so I know a little, though! Hahaha) and This small microphone is very very good.
I would do without this choice problem.

cependent remains an unpleasant little story: the day I buy (in a store in Paris) I went home and did not work at all ... hehe, I had to go back and change it myself .... but since the new worked great, and it seems to be rather robust.
Did you find this review helpful?yesno
»

dunamai's review (This content has been automatically translated from French)

Apex Electronics SP1
5
Good for what is technical, I'm not too rigged ... So let me just say that it is a set of 3 pickups studios for the rest, see the manufacturer's website ^ ^ (j'men not go out too bad ...)

I use them for a few months and I must say that my first is static, I'm in heaven! We are very far from my entry level Sennheiser. I've mostly home studio and I must say I'm glad to finally replace my static dynamic.
I use it as an amateur and I am more than pleased with the quality they bring me. Right now I use an Apex 180 for everything sound effects: footsteps, creaking doors, ambience birds chirp with the omni capsule ... and really it restores the sound very well, very naturally. Very nice as a good guitar folk stereo pair, with a good guitar course! (Well not me ...). By against on another more serious guitar, the sound is really deaf. Conclusion: the 180, because of the small diaphragm, are, I think, more suited to acute.

I had the opportunity to test the Apex of 435 votes. Excellent. I play around with the EQ in Cubase and presto! Same for the sax: very good sound.
on the other hand I tried it on a djembe but I find the sound really flat, even with the equalizer behind. I may be the mauvaits settings or misplaced, I know. But I think for all that is percussion, it is better to take a dynamic.

Here I made the rounds of my uses.
To note, I had 9 and told me we could always do better, but on reflection, I think for that price, you can not do better! The price / quality ratio is excellent, period. Considering the price, it does not expect such a sound reproduction!

With the experience I'm pretty sure I would do this choice, except in my future uses, they disappoint me ... But for now, it's not! So if you have a tight budget for your home studio and want to start a fleet of pickups to introduce you to the investment and achieve the best amateur, throw yourself on these pickups!
Did you find this review helpful?yesno
»