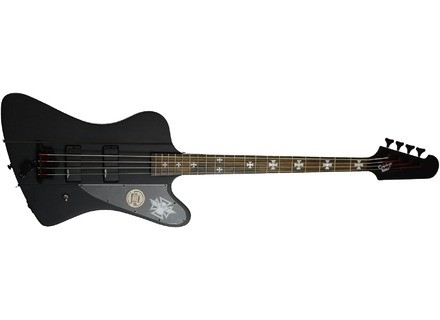 colonelstracker's review (This content has been automatically translated from French)

Epiphone Nikki Sixx Blackbird
5
Made in China
Channel stocky, mahogany body, $ $, 3-point bridge, mechanical clutch, switch &#39;some of his / her for there&#39;s no ".
Compared to other Thunderbirds of the brand, the chamfer of the head is softer and without steps.

Question frtes, there are enough for what the bte serves.

The back is in the form of Iron Cross. (Inlaid mother of pearl like hard plastic Submitted trs well)

Exists only in black satin.

Weight a little more lightweight than a Gibson Thunderbird, so everything is within standards.

EDIT: the bridge is one that is mounted on the Thunderbirds Gigson. So good at all <img class="smiley" src="/images/audiofanzine/interface/smileys/icon_lol.gif" alt="" />

Before playing, ask impractical scurity of locks (security type belt fasteners or Schaller Warwick - between 10 and 15).

The neck is strait, like jazz bass, not really what I prfre (qu&#39;aptre as the Stingray). In addition, the photos of prsentation, it is DIFFERENT from what we find in stores, it is shown wider at the head.

Standing the bass tends nosedive if the lche, but in playing position, right arm CONTRL everything smooth and hassle free by taking naturally support the instrument.

The bright body shall adopt and lack of ease dcoupe ask what you are looking for a position. In gnral apparently quite low and therefore the style of play is heavily influenced by this position.

The handle is positioned about 10cm longer than a normal low left, making tires more difficult positions on the 5 Premire boxes. But this is not a problem since the bte is made for the "drive" the carrier, as the arabesques: the blackbird, it is not a dentelire is pleased t some kind of Mig 25: the big, heavy and of the powerful.

Effective in specially. But not versatile.

EDIT: Finally I love the comfort factor ... Once the strap adjusts, you feel comfortable trs, and the length of the handle with the big head and makes a good confidence.

Sound: Easy: there is one!

Good all the same, a slow trot empty rvle a good violin, all notes sound neat, clear, with this in prsence mdiums that must mahogany . A rgal. Intonation RULES factory is correct, the strings are a bit high I got (although I&#39;m quite a bourrineur when I set).

Branch swith OFF: no sound: OK

If you want slapper, discontinue your reading and go to the radius Alembic. If you want to play rock, keep ...

In other words, this bass gives the best of it even plays mdiator.

L I must say that for a passive bass, your exact is surprising. The sound is powerful, rich, high tones not garish, and the output level lev. I found him in a few strokes of Warwick (mediums) and Rickenbacker (treble, bass). Indeed, for that matter, a small tribute to see mister Lemmy ... passes a law, the distortion is great, the sound remains Dfine.

This low possde a particular sound in the low mids, which some describe as cavernous. Not bad for the gothic rock or mtal very heavy. That&#39;s good, it&#39;s a bit the style of the house <img class="smiley" src="/images/audiofanzine/interface/smileys/icon_lol.gif" alt="" />

The pickups seem a little prs strings but for me was going well. May be that players will express less difficulty on this point, so patience, instead of drgler your instrument, try to enhance your precision.

Play the finger, the hand is placed well on the neck pickup, but the position is not because the bass is idalie DCAL left of 10cm over the body shape.

Well, let the mediator and put in motion our cohort effects turning to get a quick tour of Steven Severin. The lead sound with chorus or flanger plutt is nice, but the mediums are pervasive. mfier is on!

The finishes are the weak point of this bass. For example, the button on the box dernire is suspended, so they made the economy of the paint on the heel ... to be seen when one is the bass player ... but is not seen when it is being s&#39;clater groupie in the pit.

What I dislike: comfort, but hey, must suffer to be beautiful on scne. <img class="smiley" src="/images/audiofanzine/interface/smileys/icon_mrgreen.gif" alt="mrgreen" />

Considering the price of the thing trs low (275 and 77 ... the need for a tui SPECIFICATIONS does not fit into a standard tui), it is not impossible that j&#39;ach &#39;ll be a MODEL SERIES of "pro" (that is, active civil, with neck-through) the MODEL "goth" because it&#39;s just the style of the house and 235 tip, should not deprive themselves, even when it is 10 times cheaper than a beautiful Stingray and 12 times less expensive than Rick.

PS: still have not found What is the "opti grab" ... I use it to pass the cable before plugging it ... it is always better than the strap o use a painting ...)

EDIT: So the OPTI GRAB is actually pass the cable.

EDIT 2: I do it again this election, especially if it existed in other colors ... Genre chilled white, red pte or red varnish ...

The on / off button is quite nice. The sort of finger-grip is useless for me - fired. The pickguard is just too plastic for my taste, plus the logo please me more than that so ... - Fired.

So it pleases me.

on the other hand, big fright when I changed the strings to the largest: the bridge is out of joint! 0o I glued the thread but it really does not trust and it's not really a guarantee of quality ...

Painting is a very nice matte black bears but not quite the tough life he leads ... I have quite a few snags. You will say "should be more careful!" - Ok but if like me you're not manic, this may be a defect.

Regarding the handle, it is rather broad. I have less ability to play on my Peavey Millennium BXP4. But hey, it's a matter of taste.

The ergonomics are not great, the bass already severe slumps. I moved the strap fastener on the mounting plate of the handle and it goes a little better. (I recommend) is perhaps a question of size but I find it quite heavy.

Access to the treble is fairly easy and you can easily get a good sound as the plectrum to fingers. on the other hand it is not really made for the slap. It is not impossible but it is not that great.

Playing in a deathcore group, it is ideally suited to this style as well as everything that runs with rock and metal.

Mics spit well, lots of fishing! The sound is rather fat and contains a lot of bass. Nevertheless, the sound is very precise, while keeping a personality. I like!

I use it for about a year in repeats and in concert.

I bought it mainly for its look and sound very huge. The interface is very average but can be improved by some modification.

The value for money is OK, nothing more.

I do not think I would do this choice, I would buy a more expensive low quality better and lighter. But hey, I love him well, no question of selling anyway!