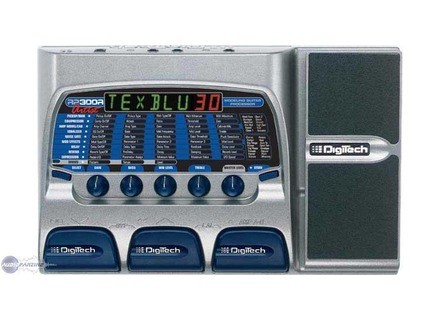 RP300A, Multi-Effects for Electric Guitar from DigiTech in the RP series.

DigiTech RP300A
5
I got this for Father's Day from Mucisian's Friend via the internet for $200. I needed an effects pedal to complete my sound set up that I wanted to be able to play the songs I am learning/like.

This unit is very sturdy and easy to use. It comes with a ton of presets. The built in drum machine is great to play along with and helps me improve my timing. I haven't used the sampling feature yet that allows playback of sampled songs at 1/4 speed but I like the fact that it's there if I can't figure a song out. I also like the built in tuner and it works very well.

I honestly haven't found anything I dislike about this effects pedal. It does take a little reading of the manual to figure out how to fully utilize the controls/capabilities of this pedal but once you get over the learning curve you can't stop trying out all the different effects.

I was surprized how tough this bad boy is. I'm pretty big (6'5" and 240 lbs) and my size 14 foot has no trouble stomping on this pedal and it takes the abuse.

I like this pedal alot. I did tons of research before I bought it so I could bet the best pedal for my money and this baby surpassed my expectation. You can't beat it for quality, affordability and capability.

DigiTech RP300A
1
I got this pedal for christmas and I think my parents paid about $200 for it from musician's friend.

I don't like much about this pedal exept for all the different effects it has.

I hate the tone of this piece of crap because it doesn't have much of a brown sound like stomp boxes.

You could probably drop this craper off your freakin house and it would put a mark on it.

Don't buy this pedal unless your rich or somthin because it sucks.

DigiTech RP300A
3
I bought this off of musiciansfriend.com in hopes of getting a reliable pedal with all the effects you could think of without burining a hole in my pocket. I payed $200 for it, which isn't too bad.

It has pretty much every effect you could want to use, plus other things like 2 different amp channels. The effects can be modified A LOT so you can get a pretty good sound, but nothing like what you can get out of a regular single effects pedal. I like the compressor - no buzz.

You can't turn effects on and off as you would expect. You have to manually go through each and every effect out of the very many there are (I think a total of 120). So when switching, you need to scroll through through unwanted effects. And don't believe their little "11 effects at once!" Yeah right. You can only use one, and that one can have only distortion (which isn't that great) and you can use the wah. What they mean is there are 11 parameters you can modify (which is good, but outweighed by other things) for each SINGLE effect. The best effect on there is the built in wah foot pedal. But still, regular wah pedals are better.

The most important thing of all....make sure you send in the warranty or get extra coverage when you buy it. Mine broke within less than 2 months' use. It turns on and all, and you can go through the effects, but no sound, which kinda defeats the purpose, ya know? It's metal, but not all that sturdy. I haven't taken it appart or anything, but it feels and sounds hollow when you knock on it.

It's alright if you don't want the top-of-the-line effects like in a single effect BOSS pedal (they're good and will last you), for example. But if you're gonna buy it for live performances, no, don't. It's not made for that....apparently for practicing in your room, which is what I mainly used it for and it didn't even take that without breaking. But if it lasts you (all of my friends had this or other RPs and they all broke too), it'll be a good practice unit......no more.

DigiTech RP300A
3
Digitech's RP line are computer chip driven multi-effects floor units boasting effects like flanger, phaser, rotary speaker, tremolo, envelope filter, chorus, delay, and reverb along with amp simulations of popular amps. Some have an expression pedal for assigning an effect to like the RP300A.
The RP300A features 1/4&quot; input and stereo output jacks, headphone output, jam-along 1/8&quot; input, and it includes an AC adapter to power it.

Let me just say, the presets might impress you in the store, but when you get home and really start playing you will want to start creating your own presets, which is fairly easy. Don't be deceived by the advertising, you can only use one effect at a time and not 12, but fortunately the effects are seperate from the compressor, delay, and reverb; so for example you can dial in your compressor settings, then your amp model, your effect like chorus for instance, then your delay settings, and then finally your reverb. But using chorus and phaser at the same time; you can't do that.

The effects are fairly good, maybe not as realistic as if you had individual stompboxes from Boss or DigiTech for each effect, but they certainly aren't junk by any means. They are quite usable, and they have up to 4 parameters to edit for each effect, which can be tedious but gives you more control. If you want LESS paremeters to edit and more simplicity then maybe the RP200 or 150 is for you.
I played a handful of instruments through this, mostly a Fernandes LP Junior style guitar and a custom Telecaster. I dug the clean sounds of the Blackface model with my Tele, and the Rectified model for distortion. I soon became addicted to swirling delays and whooshing flanger and phaser effects, and the spacey vintage vibe of the rotary effect. I was on an effects high for weeks. The compressor definitely comes in handy for getting even sustain as long as you arent heavy handed with it.
Ultimately, the amp models can sound a bit synthetic, and the effects don't sound analog, they are fairly obviously digital, but I think running into a good tube amp would greatly improve the sound from what I was playing it through: my old solid state Peavey combo.

I would imagine the speaker cabinet models would help in making this sound better for going direct into a PA system, but I still wouldnt want to unless I had to. Some comment it becomes thin.

I had mine for a couple years.
There are a lot of handy features I love like the headphone jack that let me practice or rock out at night with the wife and kid asleep, and the built in drum machine is cool even though half the beats are just too cheesy to be useful. The built in tuner is accurate and handy.
My least favorite feature is that some effects are just too complex. I wouldnt prefer NOT to have 4 parameters to edit to tweak my reverb for example, its just TOO much control. 4 parameters is nessesary for a complex effect like flanger though.
I owned an RP150 before this, the sound is comparable but the 150 was simpler. I don't use the expression pedal as much as I thought I would.
If you can pick one of these up used for well under 100 bucks, it is worth it. If you are going to spend 200 bucks for one new..... then I would buy a Line6 POD which has superior amp models.
Did you find this review helpful?yesno
»
Read the 6 user reviews on the DigiTech RP300A »