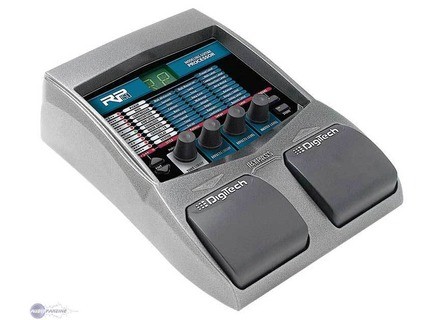 RP150, Multi-Effects for Electric Guitar from DigiTech in the RP series.

The USB connector is great because it allows me to use the RP as an external stereo sound card with volume control (and the sound quality is much better than that of my old computer).

The user interface is very simple, which is a great advantage compared to the Korg AX3G, even though I also like it, but it's a totally different concept.

Everything is labeled on the device and it's very easy to move through the parameters. It's one of the main advantages of this device.

If you want more, simply use the USB connector, download the Digitech software and install it (it doesn't work immediately with Win XP SP2: you'll need a Microsoft update).

Once you get the software working you're possibilities are endless. I especially love the duck delay (see my Rocktron Intellifex review).

The mixer/amp control makes wonders and I appreciate the separate 1/8" jack output. The unit also has two 1/4" mono outputs... It's much better than Korg's inconvenient all-in-one solution.

I give it a 10 considering its price.

Several music magazines praised the quality of the reverb effects, some even went so far as to compare it to a Lexicon, but I'm quite disappointed. The reverb effects of my Korg sound much nicer.

It's the same with the RP150's octaver which sounds very synthetic but it's a real highlight of the Korg.

The EQ is nice and you can use it on its own (or with compression and reverb for example).

It sounds a bit too clean but clear and fresh. You can also activate an overdrive PLUS a slightly overdriven amp model (great for solos) with a single button.

These applies to home or headphone use but not to band rehearsals. The sound is too sharp and not powerful enough... Anyone with an MG Marshall can get a better sound.

I bought it as soon as it came out. I use it frequently as a headphone amp with my distortion pedals (great results with the blue GDI21) or as an interface between my electro-acoustic guitar and my Samson 40A monitors (also a great combination).

When I play with my band, we use it either as delay/reverb effect or as an interface between the distortion pedals and the mixer (or keyboard amp) for people who don't have a guitar amp with enough output power.

I find the unit is a good choice considering its overall sound quality, numerous possibilities and price. And the ease of use makes it a great tool to start out.

I give it a very good mark (I believe I recall a Metal Zone pedal had the same price a few years ago...)
Did you find this review helpful?yesno
»

Everything is thought out... Sound editing is easy. The user's manual could be clearer. But once you read it and try out all settings you'll understand how the unit works (even I did!): 9/10 because of the not-so-clear user's manual.

Delay, reverb, chorus and acoustic sounds are very good. Excellent sound with the adequate editing but it's much more difficult than with an effect pedal. This device offers you several effects for the price of a good noise gate. Good dynamic response. So I give it 9/10 but not 10 (I'm rating the ROCKTRON PHOPHESY).

It's another story when it comes to distortion. I play heavy metal and I'm looking for a METALLICA, NIGHTWISH, MEGADETH or FRIEDMANN sound. I don't like the distortion nor the amp simulations. No dynamics, no definition, muddy sound. It's not up to the level for playing metal. I connected a METAL ZONE MT2 before my RP150, played wit the settings and now the MT2 and the RP150 have been transformed into a GT10! I give it 8/10 because of the amp simulations and the distortion . But 10/10 with the MT2.

I've had it for about one month. It's easy to use. Light and effective. Beautiful clean sound. Very good distortion sound with my MT2. I already tested the GT10. It's heavy and expensive and it looks awful. But it always sounds awesome, even at high output levels. The RP150/MT2 combination produces the same sound quality but it's not as convenient as having a single footboard (the sound of each unit alone is only average). The MT2 alone produces a cold sound and the RP150 adds warmth to it. The MT2 adds a high-quality distortion sound to the RP150. 8/10 since you have to buy both.
Did you find this review helpful?yesno
»

I have over a year. It is for me boost my MT2 (with the dealy equalize and reverb) and make bass sounds and acoustic guitar. <img class="smiley" src="https://fr.audiofanzine.com/images/audiofanzine/interface/smileys/icon_biggrin.gif" alt="biggrin" />
With much more money I will buy a pedal that does all kinds Boss GT10.Avec super distortion and good noise gate it's a cheap multi-effects.
Did you find this review helpful?yesno
»

crisoban's review (This content has been automatically translated from French)

The use is very simple, except in my case, I can not get out a single sound on my pc, yet I tlcharg usb ports, said x-software and when I connects it detects it is as sound card, so if anyone could help me rgler this problem, I Remerie in advance.

The effects are incredible quality

I use it for June 07
only problem, the connection to the PC
but it is for me the best deal piont of view qualitprix
Did you find this review helpful?yesno
»
Read the 8 user reviews on the DigiTech RP150 »