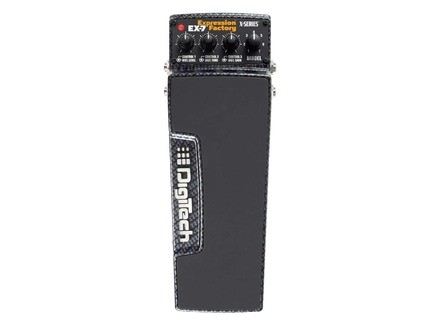 EX-7 Expression Factory , Multi-Effects for Electric Guitar from DigiTech in the X series.

Zelldevine's review (This content has been automatically translated from French)" The Swiss Army knife of effects!"

DigiTech EX-7 Expression Factory
5
This is an expression pedal, volume, wah:
* The effects or type effects are available, in the order of the button:
1) A wah: Vox Clyde McCoy
2) Another wah: Dunlop Cry Baby
3) A delay cosmic Digitech Space Station
4) A whammy
5) A Chorus: Unicord Univibe
6) A cabin Leslie rotary speaker
7) A Flanger
* The pedal uses digital technology, but to my knowledge the effects are not editable via MAC / PC.

The configuration may seem complex at first, but after a few hours, freelance quickly how it works, simple and well built.
Operation is simple, all effects are customizable in intensity, volume directly via the knobs in rings.
I can not remember the manual, but it would surely be one.
It may, in addition to all these effects, add distortion, fuzz and one I do not know yet what kind of effect. By switching to "red": The LED changes color, when activating the bottom of the pedal with the heel. Giving you even more possibilities. Personally, I left it on fuzz from the beginning, so I can have fuzz + wah, whammy + fuzz, fuzz + flanger etc. ... a real multi effects!

The effects are all well modeled and the pedal inspires many things when we take the trouble to look for them every possible sound.
I use them with an electric guitar Gibson SG Faded, and all sound great.
For taste, the fact that I use the least is the first Wah, Vox Clyde McCoy, I just prefer the Cry Baby. The Flanger is perhaps a tad cold. Everything else is really top quality.
Special mention to Leslie very fun to use with a guitar!

I use it for over 3 years, I carried around absolutely everywhere, in rehearsals, on stage, and it takes the shock. It is a robust!
No I have not tried many models simply because it has no counterpart in its class, to my knowledge.
This pedal goes with me everywhere since its acquisition, it is a real Swiss Army knife, it replaces seven effects by itself. Very handy for not load in repeats!
The sound "Space Station" is just wonderful (listen to the intro of "I Am the Highway" by Audioslave, for an overview)
What I like the +: the quality of the sounds and what they inspire
What I like the -: the "race" of the pedal is a bit short, I would have liked it to be longer in order to further qualify the effects (including wah)
Very good value for money: certainly not cheap, but it is a quality item that you will use often.
With experience, I would do this choice, even 1000 times, as this has opened up new possibilities for composing, and "spice up" my game
I highly recommend this effect, we see too often!

Audio29's review (This content has been automatically translated from French)

dbattement the expression of the pedals is too short to fully exploit the two octaves up whammy in config, and to make "sweeping" the slow wha wha!

nice option SETTING THE Tone on the whammy, which provides a sound slightly less synthetic, especially on a bass!

Mc.redneck's review (This content has been automatically translated from French)

(The space station and the whammy has seven height positions (Detune; Secondeup => Third majeureup; Straight up, Octave up, two octaves up, one down Octave => an octave up and down Second Reverse pedal is to say zero-one seconds below his bottom dry and pedals) is not practical or easy forcment explain, so I guess not what it should be understood .. I transcribed m&#39;enfin ple-mle ca me p&#39;is pedals his first one tries to buy before. walla lol

More than one option volume pedals.

-No shipping possible on computer, no internal memory.

One-size pedals quite comfortable, particularly heavy and sturdy shoes for big qu&#39;ca not drape. Finish Impecable (dco carbon) and srieuse. Only footswtch optional, even if it is metal, etc ... is a tad cheap and Australian (no screen) especially for the price ..

The config is very simple. Digitech has a config opt for analog drives.
three double knobs (ring + tip) are used to set three paramtres effects (tip), the other three (ring) can adjust the volume, tone (frquences) and the gain distortions.
Quatrime a knob selects the effect type and / or distortion.

An expression pedals can be varied effects in the foot. It also possde a swtich TOE (PDAL grows back like a wah) and a switch HEEL (zero-pedals) that allow to operate just in TOE and HEEL effect the effect and the disto ... It also hurts the bottom ... that it is impossible on this pedals to access a sound effect without distortion ... -Either you have to select the distortion effect + (HEEL) and three seconds remaining on the TOE switch to access the menu of choices on the type of distortion. Either-locate to a type of effect that the expression pedal does not affect the zero-signal ... cd .. bah the whammy set to "detune, 5th up, octave, or reverse 2octave 2down" in the other position, the pedals zero-whammy the sound down. It&#39;s really not practical .. better to have one of distortion pedals and more, or a good distortion amp, all fawns .. It&#39;s a bit weird the stuff ... especially for the Live ... the additional footswitch as quite convenient, since it allows to switch quickly from one end or the other dcrmentation incremented or a pressing one or other of the switch, return to first effect (crybaby) or go to the last (Flanger). It also allows the effect of moving from simple distortion effect +. ngligeable not. missing is a distortion knob all.

As for the edition now Digitech jou with the map of analog, there&#39;s no memory in the widget so we chose the distortion is the RULES, p&#39;is APRS we chose its effect on the RULES and basta ... it is rather curious. No Dranga for recording o you can do your re-re unhurriedly. against live by, it would almost be a "preset" for every .. rglage just a boat that goes for all effects (at least those used) and an adjustable distortion that would go well with the distortion being used .. bah otherwise have to bend down to change its rglage, genre between songs .. &#39;Good end .. it&#39;s good for a few good effects Defines a set. the image of a Wah-Wah pedals actually ..

The manual made me die laughing .. box of the pedals should be 40 to 50 cm long by 25 wide ... the indoor, let the pedal take the fourth place .. dj is amazing .. and the manual is not bigger than a Credit Card .. pais most certainly .. but good. Having bought the pedals in Germany, I had the manual in English, but of all fawns is available in French with translation, which kills the digitech site.

I test out the pedals on my Motu dry and frankly sounds are flawless .. trs good quality of all levels, the effects are beautiful, musical, the rglages are doss there&#39;s not too fancy, the distortion simulator with HP have made a good trs owl. trs own quite close to the original, in fact, even if we found not all rglages origins.
I tried also dry out on my little old Marshall and my Roland JC160 is your exact is very well. really. trs of good quality effects. Nothing to do with my digitech dernire, the XP100 o c&#39;tait the scam all levels.

So I ssay both outputs, not the stereo, I would fill my mind a little rpt APRS and live.
I tried it on both my amps and dry on the sound card with my old washburn (like Les paul / Lag Roxanne).
With Strato found sounds trs RATM (of renegades) or Incubus.
But this fits very easy PDAL other styles .... all styles of play with effects in it actually.

I love all the effects of this stuff I probably over rticence juggle distos, is seen as practical. m&#39;enfin I like all the effects. The whammy is a bit on some fancy rglages, but there&#39;s always room for some nice voice acting / chorus effects or Varis. The stroke of the pedals as a little longer than a cry baby There&#39;s all the same what to do.

I love the flexibility of output .. h h p&#39;us b&#39;soin same amp or live in rpt. The sounds are really good all trs (especially in this price range, this is a great all in one). except of course that the same output "HP simulator" bah if you play a clean sound .. bah there&#39;s more hp sim ... therefore need a guitar with a good clean sound.
However chelou ergonomics is, as I explained p&#39;is dj ca lack of presets few internal users. damage.

Well I tried several types of multi-effects, pedals, etc ... but is the only quidans this price range offers so much diversity of effects and disto trs of good quality.

The report price is trs good quality, judging by the sound quality and the price of everything bought spare gear.

toden80's review (This content has been automatically translated from French)

DigiTech EX-7 Expression Factory
4
For effects see below
I said that his No. 3 (space station) was awfully good, can be used for example in making ground like synth. See also the intro to Metallica's Orion, when one engages the distal
I recommend the addition of pedal FS3X, to better manage presets
as specified below, the EX7 works as a pedal, so no preset, etc. .. This means eétant setting allows for optimized sound effects for almost all
WARNING only a month after my foot starts to bugger such strong noise, computer type and cut all the sound of the guitar ... great (not food or wiring). I guess it's one missed the first series, but it fucks wrong. If you have this problem, there is a forum post about it EX7

Apart from my problem, when it works:
It s'agitd'une effects pedal
no memory, we decline to address
no problem if you love to touch his foot, if not go his way
the optional foot switch is useful if you have a setting that goes to several sounds

Quality is nickel effects
by against the distos are not adjustable
quality nickel emulation
very musical and very varied, everything you need, add a distortion pedal, delay and you can do what you want

Mistrust, it works like a pedal point
On the other hand what I've experienced concrete slabs guarantee
On paper this pedal is great
I love it
the footswich is a real plus but it does not provide access to memories
disto plus the passage / light is a good addition
I satisafait big trouble after sav
Did you find this review helpful?yesno
»
Read the 11 user reviews on the DigiTech EX-7 Expression Factory »