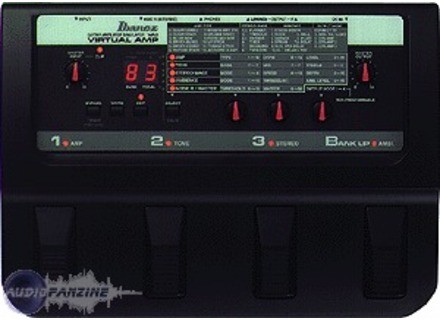 The VA3 is not factory gas!
Use the foot is pleasant.
The manual is pretty clear and intuitive rglages remain!
Very soon we adopt and the edition of sounds becomes faster and easier.
Matos very tough because it does not boug for 15 years!

Correct sounds that satisfy all users (of the era).
The sound palette is wide enough, without unnecessary effects, just the basics to create beautiful sounds clear, on the other more "crunch", and even the good distortion in the genre 80s'

Try it if you find one of Cygnus, you pouriez be amazed!

This is the first amp simulator that I bought around 1995.
Obviously, we did better since.
Only prevents despite its PCM sounds (like the 80's synths)
the quality is stirring especially clean sounds.
The overdrive sounds pass yet but a little less metal sounds.
It mostly served me to make "Ballochs" or lil cafes concerts.
I do not regret that choice, he does a longtime companion.
Did you find this review helpful?yesno
»

SlapKid's review (This content has been automatically translated from French)" The first amp simulator, and it holds the road!"

Ibanez Virtual Amp3
4
Architecture very similar to pt3dx, a delight to use because you can pay the entry level (potentiometer and LED clipping) to guitars without touching the presets, output is separate phones, the main outputs are formatted jack (no need Cable in which there foirent all pretty quickly), and parameters are set with real knobs. There is a tuner on board and in edit mode the footswitches are used to enable / disable modules without downtime or noise.
Everything is on the machine, not crash and you can lose the manual without being like him ...
The dead time from one preset to another is not huge, it is much more bearable than my fender fire mustang3 eg (nobody grumbles and there ...).
This machine is very well damn, friendly and reliable (nothing went wrong, so good as in the beginning).

It is entirely digital, unlike my pt3dx that has the overdrive / distos analog.
You can not combine this compressor and distortion for example, as long as the compressor is part of the proposed variants clean.
The VA3 is very strong in stereo, really specifically provided for.
The noisegate makes good service if you do not play, we do not say enough.
The output level is directly accessible, not stashed in the back / wired backwards ...
The only way to change banks (9 three presets) is the right footswitch, increment only a bit painful.
An additional footswitch to enter the fashion pedal had been the top.
It is very easy to edit a LED illuminates when you reach the programmed value then you have never lost.

Surprise surprise, thanks to the four output modes (global, not programmable) it is never problematic whether a particular host amp, sound, headphones ... and without affecting the sounds you programmed.

The rendering is pretty cool, the overall sound quite well rounded and medium, it goes very well with an electric guitar music as always. It will benefit from plugging into an amp like hot class course (or better, two stereo).

In comparative tests with extended-RP70-muza ms50g fx7-zoom-pt3dx crushes everyone of course but VA3 comes out with honors. As far as we do not want the rectum-frier distos, that he knows not to do (iron maiden max) besides the amp does not yet exist at the time of VA3.
The Tubescreamer type overdrive (marked above, the original circuit) is a delight, and flexibility.

I have since the last century, bought with his demifrère the pt3dx which is a classic multi (a bunch of pedals and compacted programmable), and the two have never caused problem, tough.
Currently I use two amps VA3 harley benton CG15 in an apartment, and the sounds coming out are downright jouasses really intended for stereo.
Tested on my VOX AC15, I was not too happy given the propensity of the vox to push the mids forward because the VA3 is already in the registry so it was too.
Same with the zt lunchbox actually. Back loop on the bugera 1990 Ben was very cool well balanced although down compared to the normal gross 1990 useless.
In okaz a good plan if you're not the type makeup-masked, and more if you like the Tubescreamer and beautiful effects will not you take the coil.

PointG's review (This content has been automatically translated from French)

The VA3 is not the gasworks!
Using the foot is nice.
The manual is pretty clear and the settings are intuitive!
Very quickly it adopts and editing sounds is fast and easy.
Matos very sturdy because it has not budged in 15 years!

Sounds correct that satisfy all users (at the time).
The sound palette is quite wide, without unnecessary effects, just the basics to create nice clean sounds, the other more "crunch", and even the good kind in the distal 80 '

Try it if you find one of OCCAZ you could just be surprised!

This is the first amp simulator that I bought around 1995.
Obviously, it has been better since.
Nevertheless, despite its PCM sounds (like the 80's synth)
Quality is stirring sounds especially clear.
The overdrive sounds, but still spend a little less metal sounds.
He served mainly to make "Balloch" lil cafes or concerts.
I do not regret that choice, he has been a longtime companion.

Other Ibanez multi-Effects for Electric Guitar